Migration and the State Amid COVID-19

Migrants should be provided with social security and pension, as they strive more because of poverty. 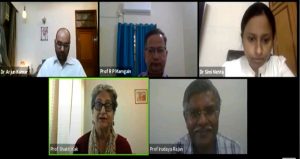 Kerala, in his Special Lecture organised by the Centre for Work and Welfare, Impact and Policy Research Institute (IMPRI), New Delhi. He shared that there is no policy for migrants. Migrants in today’s scenario are concerned more about livelihood than the COVID-19 pandemic. Many countries experienced lockdown, but migrants in India were seen dying through the railway track, begging for food and coming in large numbers to railway stations. However, this country lacks the number of people who suffered the brunt of lockdown. Prof. Rajan said government should have given hint before lockdown. Government, like the Government of Bangladesh, should have given one-week time before the lockdown. It should have arranged special trains, buses, flights to get migrants to move back. This lockdown highlighted the borders among the states within the country.

According to the census 2011, 450 million people in this country are living at the place they aren’t born. Prof. Rajan said “150 million people are added to migration in every decade. Hence, it can be predicted that in 2021 census, about 650 million people would be living at the place they aren’t born. Out of these, one-third of the people, i.e., 200 million accounts for interstate/inter-district migrants and out of these, only 140 million migrants would actually be working. Hence, 140 million are affected by the lockdown. Economic review says that 9 million moves back by train and buses in a year. We ever knew these people were moving, but it gets highlighted in this pandemic”.

Prof Rajan further shared that there exists a distress migration.On the one, side there are policies to promote urbanisation and on the other side there are policies to keep poor people in rural areas. People are given 100 days employment under the Mahatma Gandhi National Rural Employment Guarantee Act (MGNREGA), and state tries to give urban facilities in rural areas, but still people are pouring into cities because they want to earn more money than the state is providing them in rural areas. This shows the unhappiness of these workers and failure of state to provide them the required facilities. Prof. Rajan questioned what they will do in remaining 265 days of work?

We never give them enough time to move back to their origins, but they faced the brunt of series of lockdowns. Middle class people can earn by working from home, but poor people have no source of income.

Prof Rajan defined the trains as corona express which took initiative to move back the migrants. He interviewed one migrant, who said “I went to my village and was transported like a livestock; I was moved in a lorry”. He added further that nobody seems to care about the migrant, that’s why they are walking on the streets. “Migrants are not beggars; we made them beggars, because we don’t have policies for them.”Prof. Rajan questioned who is responsible for the plight of migrants – employers, their state of origin or the state providing them work? But corona shows no body is responsible for their situation. These people are heroes in the cities and most of the economic activities are carried out by them, but this pandemic made these heroes zeroes. First time in the history of them, migrants left the cities empty handed, accompanied with the stigma that they are the carriers of coronavirus.

PM Care Fund of about Rs 20 crore is being used to buy ventilators, which is important but they should also spend on efficiently providing food to the migrants. Giving people oxygen is as important as giving food. Relief package of Rs20 lakh crores were announced but they provide only 5 KG rice per people which indicates that it is spending Rs 3000 crore. Still they are on the roads begging for the food. Then they added money in MGNREGS, but how will they work in lockdown and pandemic? 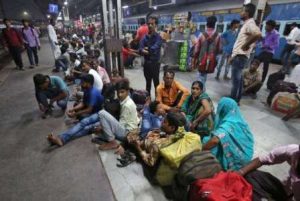 According to Prof Rajan government should give direct cash transfer of Rs 25,000 per month per migrant, which would be 3 lakh crore as a whole for a quantum of 140 million. This will be step towards self-reliant. He concluded by saying that not giving salaries to migrants is a day light robbery. Indians and government are responsible for this. Migrants should be provided with social security and pension. Secondly MGNREGS is an appropriate programme, but migrants strive more because of poverty. Thirdly, there should be no limit to work (100 days). Migrants can work for 365 days. There should be no restriction. Migrant Special Card should be introduced like we have debit card or credit card. There should be incentive for them, which will also be used to have a data base.

Prof Shakti Kak, Chairperson, Centre for Work and Welfare, IMPRI, shared that the economic closure, which began on 25 March 2020 affected migrants, who are also workers in the unorganised sector. The migrants lack the resources such as employment contracts for their labour and pay the highest price in case of epidemics.  Prof Kak exemplified the workers involved in Surat and Tamil Nadu in power loom, handloom, brick kiln industries, who are not seasonal, but they are employed in contract jobs which lack welfare measures. She opined that thenationwide lockdown has compelled the workers across the country to march back to their villages with their families in search of humanity, food and place to live. It is the unorganised sector labourers and seasonal secular workers who really bore the brunt of economic closure. Their place of work has been inhospitable to them. Although NGOs have provided them meals, it is the responsibility of state, which has remained deficient and inhumane to them as evident by the fact that these workers have to reach the Supreme Court to demand safe passage to their homes. Prof Kak emphasised the role of development policy in the employment system ensuring that they have minimum wages, employment contracts, among others.

Prof Kakfurther added the provisions in the Pradhan Mantri Gareeb Kalyan Package were not implemented properly. The distribution of reliefs is not properly streamlined. The ignorance and apathy showed by contractors towards the workers is not acceptable. Lack of data constraint policymakers to formulate policies. Moreover, there is no recognition of economic significance of migrant workers.

Prof RP Mamgain, S. R. Sankaran Chair, National Institute of Rural Development and Panchayati Raj, Hyderabad, has said migrants faced permanent loss of their incomes. He said that decline in the overall income would lead to the decline in the living standards of the people, because they won’t be able to invest in better education and health facilities. He says that if now government makes the policies for migrants, what is the guarantee that these policies will be taken forward as there is weak implementation and monitoring in our country.

Prof Mamgain shared that 80—90 per cent of the migrants will come back because there is no other way for them to survive.

Agriculture has declined from over the years.Thus, there is need to ensure that these people return to urban areas with the assurance that they will receive dignified wages and life. State should have database of all the migrants including the minimum wage, working condition, social security’s benefits, among other indicators. Another challenge lies with the unskilled cohort of people in India. To overcome this challenge, in Uttar Pradesh, a survey is done on migrant workers set of skills, trying to give them job in the industries which is a good idea and should be done at higher scale. Prof Mamgain emphasised that there is need to ensure that people will come back to work in cities. We need a permanent solution to the problem. In current scenario, it is important to do away with the 100 days limit in MNREGS and rather than household, individual should be allowed to work under the scheme.

Prof Arvind Pandey shared safe migration needs planned and well-managed policies, which is a responsibility of state. There are policies and in these policies migrants were mentioned, but when the policies were enacted the migrant word was removed from those policies. The 4Ds – Dirty, Dangerous, Difficult, Discrimination – are the characteristics of migrant workers. Due to lack of registration system, migrants don’t know their employers. The lockdown has also shown that workers had not received payments for the work they have done. Government should at least pay the compensatory wages to them.

Love in the Time of Corona