National Science Film Festival (2021) to be Held in Ahmedabad

Vigyan Prasar, an autonomous institution of the Union Ministry of Science and Technology, has called for 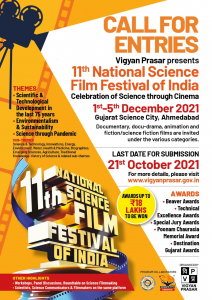 entries for the 11th National Science Film Festival of India being organised at Gujarat Science City, Ahmedabad, from December 1 to 5, 2021.

To set the direction of the festival, the entries centred on ‘scientific and technological development in the last 75 years’, ‘environmentalism and sustainability’, and ‘science through the pandemic’ themes are invited.  The sub-themes would cover a range of issues including science and technology, innovations, energy, environment, water, health, medicine, biographies, emerging sciences, agriculture, traditional knowledge, and history of science.

A large number of awards worth a total of Rs. 18 lakhs are up for grab for films made by professional, amateur, and student filmmakers.  They include Beaver Awards, Technical Excellence Awards, Special Jury Awards, Poonam Chaurasia Memorial Award, and Destination Gujarat Awards.

The festival will feature documentaries, docu-dramas, animation, and fiction/ science fiction films under various categories. Among other things, there will be workshops, panel discussions, and roundtables on science filmmaking. Scientists, science communicators, and filmmakers would be available on the same platform. The last date for submission of entries is October 21.

Vigyan Prasar is holding the event to celebrate science through cinema in collaboration with Gujarat Science and Technology Council of State Government of Gujarat and Gujarat Science City. More details can be found on www.vigyanprasar.gov.in .