Assamese writer Indira Goswami is an award-winning author and a feminist, who writes about people rarely represented in Indian writing—women, the maginalised, the powerless, the unfortunate. 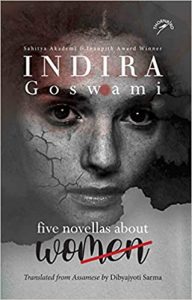 literature. Her works seem to gather more relevance over time, highlighting the many boundaries instated by humans-gender, caste, race, economical status, and the likes. Five Novellas about Women is an anthology of five of her distinguished short stories that have transgressed the boundaries of language and geography, connecting us by the basic thread of human sentiments.

Blurring Lines of Fact and Fiction

“…It was not so long ago that her own husband died and now she had feelings for another man! She was feeling this in the courtyard of the temple dedicated to Mahasati Sita. Was she an unholy woman? Were there other unholy women like her?”

Such was the tumultuous battle raging inside Ishwari, a young widow in the story “Ishwari’s Doubts and Desires.” While our protagonist vacillates between her spiritual commitment and the newfound infatuation for a man, it’s believed to have been heavily borrowed from Goswami’s life herself. Shortly after her husband’s demise, she was advised to travel to Vrindavan for her extensive research on Ramayana by her teacher and this novella chronicles the experiences acquired during her stay. Her challenges and mental dilemmas as a young widow have been poignantly portrayed through her literature.

Redefining the Fundamentals of Feminism

“Don’t worry. I wouldn’t come again. Today, all my troubles are over. All these days, I was thinking that this weapon, meaning my gun, did not make me completely inhuman.’

Right then, Snehalata did something unexpected. She started to scream in a sudden burst of anger. ‘Don’t you have any shame speaking like this? You are a lampat! You are a nara-pichash! I hoped that you’d die in prison’. After the word died, the woman started to sob.”

The aforementioned excerpt has been taken from the ultimate novella named ‘The Touchstone’. With a male protagonist Dwarakanath, Goswami manifests an alien POV which neither compliments nor thwarts the hitherto regressive patriarchy. With an empathetic undertone, she instead presents yet another broken product of a bigoted society. By establishing Dwarakanath as a victim of consequence, she breaks out of the largely perceived notion that the upliftment of women is only possible at the expense of the opposite gender or male-bashing.

Delving deeper under the surface, a stark contrast in the mindset of the two is pretty evident, symbolizing the great divide in the two genders’ sense of understanding. This disconnect breeds misogynistic ideals renders women subordinate and worse, mere sex objects to men. Thus, Goswami’s novellas revolutionize the ultra-feministic ideology in present-day hetero-patriarchy.

National Science Film Festival (2021) to be Held in Ahmedabad