While dust is good for a healthy ocean ecosystem, an increasing quantity of dust may just be counter-productive. 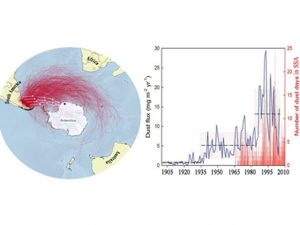 planet. It is also a major supplier of nutrients to the global ocean helping the growth of phytoplankton necessary for a healthy ocean ecosystem. Radiative forcing or climate forcing is the difference between insolation (sunlight) absorbed by the earth and the energy radiated back to space.

While dust is good for a healthy ocean ecosystem, an increasing quantity of dust may just be counter-productive. This observation comes in the wake of observing a several-fold increase of dust in the southern ocean at the end of the 20th century.This increasing presence of dust has led to a net atmospheric warming over the South Atlantic Sector of East Antarctica (SASA) by about 1 °C.

An Ice-Core based study using the Santa Barbara Disorder Atmospheric Radiation Transfer (SBDART) model was conducted by the National Centre for Polar and Ocean Research (NCPOR). The study has helped in understanding the role of dusts in radiative forcing in a better way as compared to the dust flux variability observation in South Atlantic Sector of East Antarctica (SASA).

Also Read : Covid 19 And Climate Anomaly Turn Up The Heat On Emissions

In this study, an ice-core reconstruction of dust transport from southern South America to Antarctica was done, in which a fourfold increase in dust was observed during the 20th century (1905–2005).

This has led to an increase in aerosol forcing by 30 per cent. As a result, the atmospheric cooling rate decreased by 40 per cent contributing to the net atmospheric warming over SASA.

Dusts in atmosphere also play an important role in the degradation of atmospheric CO2, which have a significant impact on global climate change. The major dust source areas in the Southern Hemisphere (SH) are South America, Africa, and Australia.

SBDART model is a software tool that computes plane-parallel radiative transfer in clear and cloudy conditions within the earth’s atmosphere to estimate aerosol radiative forcing and heating or cooling rates corresponding to the prominent changes based on dust records. This study would help to better understand the long-term Antarctic climate variability by providing radiation forcing input to climate models. In addition to this, the ice-core dust study would help in recording theincrease in dust flux in the Southern Hemisphere, which has important implications on southern ocean biogeochemistry. (India Science Wire)

Privacy and Data Protection: What Lies Ahead for Zoom?

Food and Immunity: Correlation to combat against COVID-19