The Covid-19 pandemic resulted in a large section of society unable to receive timely access to justice. 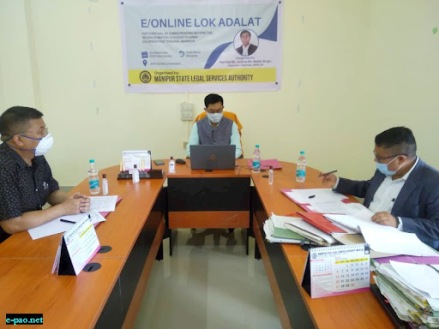 Plan for India’, to scale dispute avoidance, containment and resolution online. The roll out of the stated recommendations in the report can help make India a world leader in using technology and innovation through Online Dispute Resolution (ODR) for effective access to justice for every individual.

The report is a culmination of the action plan made by a committee constituted at the peak of the Covid crisis by NITI Aayog on ODR in 2020 and chaired by Supreme Court Justice (Retd) AK Sikri.

The report recommends measures at three levels to tackle challenges in adopting ODR framework in India. At the structural level, it suggests actions to increase digital literacy, improve access to digital infrastructure and train professionals as neutrals to deliver ODR services. At the behavioural level, the report recommends adoption of ODR to address disputes involving Government departments and ministries. At the regulatory level, the report recommends a soft-touch approach to regulate ODR platforms and services. This involves laying down design and ethical principles to guide ODR service providers to self-regulate while fostering growth and innovations in the ecosystem. The report also stresses on strengthening the existing legislative framework for ODR by introducing necessary amendments to statutes. The report offers a phased implementation framework for ODR in India.

ODR is the resolution of disputes, particularly small- and medium-value cases, using digital technology and techniques of ADR, such as arbitration, conciliation and mediation. It refers to the process of using technology for dispute avoidance, containment and resolution outside the traditional court system. As a dispute resolution avenue it can be provided both as an extension of the public court system and outside of it. World over, the potential of dispute resolution mechanisms, especially through technology, is being recognized. Increasingly, ODR has received impetus across Government, businesses and even the judicial processes to tide over the constraints due to Covid-19.

Why Do We Need ODR?

The Covid-19 pandemic resulted in a large section of society unable to receive timely access to justice. The pandemic also led to a deluge of disputes further burdening the already lengthy court processes. As the premier policy think tank of Government of India, NITI Aayog undertook a transformative initiative to use technology and innovation to help bring affordable, effective and timely justice to those who needed it the most. ODR has the potential to help reduce the burden on the court and efficiently resolve several categories of cases. It may also be integrated to support the judiciary through technology integration in court-annexed Alternate Dispute Resolution (ADR) centres, via e-lok adalats and also be introduced within Government departments for internal disputes.

Extensive deliberations, including 20 stakeholder discussions and nearly 100 engagements at an institutional and individual level, were conducted by NITI Aayog with a range of stakeholders. Public feedback was also sought during the course of the deliberations.

There was overarching consensus in support of this initiative. In fact, during one of these deliberations, Justice DY Chandrachud, who heads the e-Committee of the Supreme Court, observed: “In the wide variety of litigation that comes before every court, there is a confluence of the very substantive and not very small, but important, disputes which don’t have to come before the court. Cases like motor accidents claims, cheque bouncing cases, personal injury claims and issues such as this may be dealt with by ODR. The ODR initiative by NITI Aayog is commendable and the draft report is meticulously compiled. This is a unique analysis of the interface between dispute resolution and technology and its prospects in India.”

At the release of the report, Justice (Retd) AK Sikri observed: “ODR is an idea whose time has come, I appreciate NITI Aayog’s initiative to set up this expert committee at the right time. The report—which has consulted all stakeholders, including the judiciary and executive—will be significant and impactful.”

NITI Aayog VC Dr Rajiv Kumar said, “NITI Aayog has worked extensively on measures that can help enhance efficiency and accessibility to justice for every person who seeks it. ODR will go a long way in resolving disputes and the report needs to be expeditiously implemented.”

“Through the ODR report, our aim is to create a sustainable framework—one that adapts and endures the test of time to become an option of first recourse for several categories of claims in a dynamic manner,” added NITI Aayog CEO Amitabh Kant.

Secretary (Law) Anoop Kumar Mendiratta said, “I congratulate NITI Aayog for coming out with this report, which will help change the landscape of dispute resolution in India. Steps to strengthen ODR mechanisms have already been initiated.”