Being front-line functionaries, the police are expected to respond in an empathetic and sensitive manner, states Parliamentary panel on Home Affairs.

The sensitisation of police forces on issues of gender-based crimes can lead to better delivery of justice, states 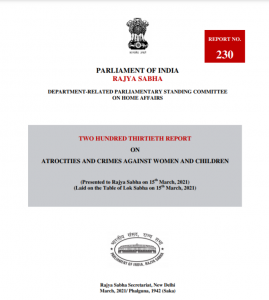 a parliamentary committee report released during the 2021 Budget Session, and stresses on the need to rid them of any bias or prejudice towards victims of gender-based crimes. The report was tabled by the Parliamentary Standing Committee on Home Affairs in the Rajya Sabha on March 15th.

“In most cases, police are the first point of contact for the distressed and therefore their role is critical in handling and prevention violence against women. Being front-line functionaries, the police are expected to respond in an empathetic and sensitive manner. It is important to remove any prejudice and bias of police officers towards victims of gender-based crimes as well as women colleagues. To achieve that goal required professionalism in terms of knowledge, skills and attitudes may be instilled in them for dealing with cases of violence against women more effectively,” the report titled ‘Atrocities and Crimes Against Women and Children’ reads.

The panel recommends that a Standard Operating Procedure (SOP) should be framed to ensure police accountability and sensitivity to deal with cases of violence against women, along with regular training exercises for ground-level officers. “The Committee recommends that a monitoring mechanism should also be created at the district level to check the behaviour and take cognizance in case of police insensitivity/ remark/ comment and initiate strict action against the errant official,” it reads.

It further states that the insensitivity has led to crimes against women and children not being registered at the police station in time, which denies justice to many victims. The Committee states that this can be checked by a system of decoy operations, like the ones conducted by Rajasthan Police, to see if FIRs are being registered or not.

The Rajasthan Police conducted 20 such decoy operations in 2017-18 to check if Station House Officers (SHOs) in multiple districts are registering FIRs. “Such decoy operations will create alertness among ground-level officials and will lead to registration of more cases,” it states, whilst recommending the MHA to issue an advisory that seeks to permit registration of online FIRs for different crimes conducted against women and children.

The report further issues a critical stance on the low presence of female personnel among the police forces, and recommends that the MHA coordinate with states and union territories to conduct special recruitment drives to recruit women at all levels in a time-bound manner.

The MHA has issued advisories in 2009, 2013, and 2015 to provide 33% reservation to women to ensure adequate representation of women in police forces to give priority to the security of women. However, the condition is still poor. 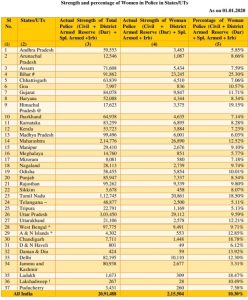 The Committee also makes a critique of the false cases registered by police personnel and recommends that after an investigation about the veracity of cases, appropriate penal action should be taken by fixing accountability of the staff member who registers false cases.

Diving deeper into the role of police forces in administering gender justice, the report presents all-women police stations as pertinent examples of the process. However, it states that they may not be as useful in instilling confidence among women to approach the police. “We recommend that MHA may ask States to conduct a comparative study on having all-women Police Stations vis-a-vis traditional Police Stations. A survey may also be conducted among people to check whether all women Police Stations have helped in the ease of reporting of crimes. Based on the outcome of the survey, the Ministry may advise the States Governments to further increase the number of all-women Police Stations,” it states.

The Performance of Delhi Police

Seeing that the Delhi Police comes under the purview of the MHA, the panel recommends the ministry to survey the performance of the force. It provides recommendations on multiple issues propping within the force, including registration of cases and identification of crime hotspots.

It takes into view the presence of fifteen all-women police control room vans in the Delhi Police and recommends a survey about its effectiveness vis-à-vis traditional PCR vans. “If the survey finds their performance effective, the number of all—women PCRs should be increased,” it reads. The Committee also recommends tracking Delhi Police investigations into Rape and POCSO cases through the Investigation Tracking System for Sexual Offences (ITSSO) to ensure certainty of conviction. Taking cybercrime into consideration, the Committee recommends providing long term and short-term refresher courses to all senior officers handling cybercrimes.

The full report can be accessed here.