Maximum annual incremental performance shown by UP, Assam and Telangana among Larger States; Mizoram & Meghalaya among Smaller States; Delhi and J&K among UTs.

NITI Aayog today released the fourth edition of the State Health Index for 2019–20. The report, titled 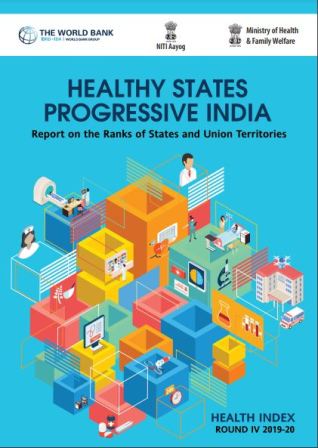 “Healthy States, Progressive India”, ranks states and Union Territories on their year-on-year incremental performance in health outcomes as well as their overall status.

Round IV of the report focuses on measuring and highlighting the overall performance and incremental improvement of states and UTs over the period 2018–19 to 2019–20.

The State Health Index is annual tool to assess the performance of states and UTs. It is a weighted composite index based on 24 indicators grouped under the domains of ‘Health Outcomes’, ‘Governance and Information’, and ‘Key Inputs/Processes’. Each domain has been assigned weights based on its importance with higher score for outcome indicators.

To ensure comparison among similar entities, the ranking is categorized as ‘Larger States’, ‘Smaller States’ and ‘Union Territories’.

Among the ‘Larger States’, in terms of annual incremental performance, Uttar Pradesh, Assam and Telangana are the top three ranking states.

Among UTs, Delhi, followed by Jammu and Kashmir, showed the best incremental performance.

On overall ranking based on the composite index score in 2019–20, the top-ranking states were Kerala and Tamil Nadu among the ‘Larger States’, Mizoram and Tripura among the ‘Smaller States’, and DH&DD and Chandigarh among the UTs.

A robust and acceptable mechanism is used for measuring performance. Data is collected online through a portal maintained by NITI on agreed indicators. The data is then validated through an independent validation agency selected through a transparent bidding process. The validated data sheets are shared with the states for verification, followed by video conferences with the states for resolving any disagreements or disputes. The final sheets thus settled are shared with the states, and after agreement, the data is finalized and used for analysis and report-writing.

‘States are beginning to take cognizance of indices such as the State Health Index and use them in their policymaking and resource allocation. This report is an example of both competitive and cooperative federalism,’ said VC Dr Rajiv Kumar.

‘Our objective through this index is to not just look at the states’ historical performance but also their incremental performance. The index encourages healthy competition and cross-learning among States and UTs,’ said CEO Amitabh Kant.

The index is being compiled and published since 2017. The reports aim to nudge states/UTs towards building robust health systems and improving service delivery.

The importance of this annual tool is reemphasized by MoHFW’s decision to link the index to incentives under National Health Mission. This has been instrumental in shifting the focus from budget spending and inputs to outputs and outcomes.

Read about the detailed indicators and scores on our dashboard.

PM Modi Cautions Public on Omicron, No Need for Panic