Kilo Lab units or Pilot plants are normally used to carry out process development or process simulation in the laboratory. 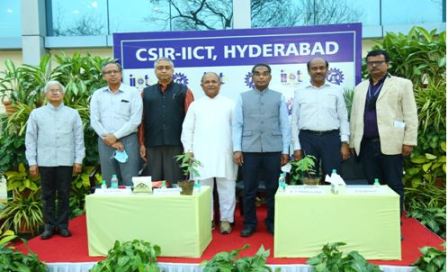 and Industrial Research (CSIR)-Indian Institute of Chemical Technology (IICT), Hyderabad, which can be used for process development and expansion of agro-chemicals.

Kilo Lab units or Pilot plants are normally used to carry out process development or process simulation in the laboratory. They can also be used for low volume production of active pharmaceutical ingredients. The facility is created as a part of CSIR-Agro Mission to cater to the needs of key stakeholders of the agricultural sector. The state-of-the-art facility will be used for process development and scale-up of the Agro-Chemicals.

“This newly established Kilo Lab will be of immense utility for the industries. The present facility is another contribution from CSIR-IICT, which is known for its role in providing various solutions to fight the current pandemic and importantly developing an adjuvant for Covaxin”, Dr Mande said.

Dr Srivari Chandrasekhar, Secretary Department of Science and Technology (DST), said “with the focus on scaling up the research from laboratory scale or bench scale to pilot scale, CSIR-IICT procured the equipment with the intent to help the industry with operations at higher scale for efficient adaptability for commercial scale. These processes will strengthen the CSIR initiative on import substitutes of key agro-chemical intermediates helping to achieve the goal of Atmanirbhar Bharat.”

CSIR-IICT has developed a bench-scale process for manufacturing hydrazine hydrate, which has, in turn, resulted in the setting up of a 10,000 MT plant at GACL, Dahej, Gujarat.

The plant is the first in the country to manufacture hydrazine hydrate, Dr Chandrasekhar added.

CSIR Agro-mission is under implementation with 12 agrochemicals as a consortium with five other CSIR laboratories with CSIR-IICT acting as a nodal lab. This project aims to develop processes that are cost-competitive, free from pollution issues, and with rigorous analytical method development, validation, and impurity characterization. The project also develops novel cost-effective, environmental hazard free processes for existing safer agrochemicals, especially the upcoming off-patent products and intermediates.

“CSIR-IICT played a major role in drug repurposing in the current pandemic. The lab made use of indigenous raw materials to repurpose drugs. Once again, CSIR-IICT can play a major role in R&D towards the development of new technologies in the agrochemical sector, wherein the technology can be environment-friendly using indigenous raw materials,” said Dr VM Tiwari, Director CSIR-IICT.