No place for mob justice in a civilized society

The brutal murder of a tribal youth in Kerala should force the society to introspect on justice and self-righteousnes.

The nation has woken up to yet another story of mob lynching. This time, the incident has happened in a state like Kerala that prides itself for its “progressive” ethos and “liberal” values. A 30-year old tribal youth, Madhu was lynched by a self-righteous mob alleging that he was a thief. In a video that was widely shared on social media, it was clear that all he took were some grocery items to satiate his hunger. The “shock” and “outrage” in the state that became an over pouring on social media was palpable. The politicians and the state administration made some noises to express their “horror”. The police were quick to arrest a couple of accused. And with that, the young man who was brutally robbed of a life has been effectively forgotten.

The unanimity shown in the state rising above the barriers of class, religion, caste and politics in condemning the murder was one of those rare occasions where a sense of justice prevailed over the characteristic blame game. There was not a single person who justified the gruesome murder in any manner whatsoever. But the question that no one asked is why did such mob lynching happen in a state that boasts itself of being a progressive urbanized society with a literacy rate of 100 percent? 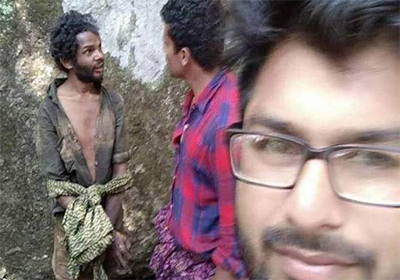 The answer perhaps lies in another news story covered by the media a few days ago. It was disturbing news from the north eastern state of Arunachal Pradesh. There, a mob stormed into a police station to drag two rape accused out of police custody and beat them to death. They were heard shouting at the top of their voice, “leave them to us, we know what to do”. This news was widely circulated and celebrated in the social media circles in Kerala. Most of the people who shared and commented on this incident expressed satisfaction in the mob action. They saw nothing wrong in mob lynching the rape accused. Similar kind of reactions was observed when some gruesome murders or rapes were reported in Kerala.

One such incident that has particular recall value is when in 2014, an accused in a twin-murder case was brutally attacked by techies when he was brought to Technopark, Thiruvananthapuram, Kerala to collect evidence. The public reaction was similar. There were more people who appreciated the attack than condemned it as the accused was involved in the ghastly murder of a 57-year old lady and her 4-year old granddaughter.

It is such reactions that have caused the society to believe that physically attacking or lynching an accused or convict is not immoral or criminal. The only confusion they face seems in identifying the cases where mob lynching is justified. People who condemned the lynching in Kerala had supported the lynching in Arunachal Pradesh. The only fathomable reason for the blatant double standard is that the victim in Kerala was accused of a minor crime of stealing food, while the victim in Arunachal Pradesh was accused of a serious crime of rape and murder of 5-year-old child. For society, if the alleged crime is of a serious nature, lynching seems to be justified. If the crime is trivial, lynching draws the ire of all sections. But what is fundamentally wrong in this situation is that none of them think that the act of lynching by itself is wrong.

Even a society like Kerala that claims itself to be literate and reformist did not even once think that it is for the state to implement law and serve justice. Mob justice has no place in a civilized society. The issue of mob lynching should no longer be addressed in isolation. It is time for the state and civil society to wake up and educate the private individuals that no one has the legal or moral right to punish anyone for any crime – whether it is trivial or serious in nature.

A peak view of Nagaland polls