Of Bullet Trains and fast movement

The Bullet Train Project should be treated as a technology demonstrator that can help the existing railway network in innovation and adaptation. 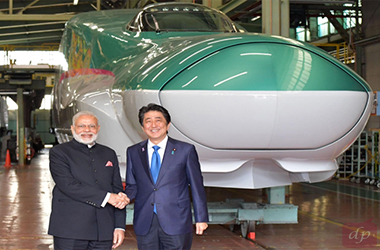 The ₹100,000 plus core Bullet Train Project of 508 kms connecting Ahmedabad to Mumbai, based on Shinkasen technology from Japan, has taken off like a bullet after approval in May 2017 by Prime Minister Narendra Modi and is expected to make its first run on 15 August 2022– within 5 years. There has been no delay in signing the agreement. With a total cost of ₹1.1 lakh crores(USD 17 billion), Japanese Government has agreed to fund 81 percent of the total cost with a 50 years Yen loan of about ₹88,087 crores (USD 14 billion) from Government of Japan with a moratorium for repayment up to 15 years. Twenty percent of the components will be supplied by Japan and rest manufactured in India.

While the interest rate is as low as 0.1 percent, the exchange risk is to be borne by Indian Government. Where will the Yen-Rupee ratio move over time is anyone’s guess. In the past, it has been adverse for India but if Rupee strengthens, it will be favourable.

The train is expected to reach a top speed of 350km per hour with about twelve stops (this is incidentally not the fastest train; they have achieved 603km per hour). The train will run largely on stilts/elevated ground except for 21km of underground with undersea tunnel also. Each train will carry 1300 to 1600 passengers and will cover the journey of 502km in 2 hours 8 minutes instead of 7 hours at present. The ticket price is proposed to be 1.5 times the current first class Mumbai-Ahmedabad ticket of ₹2000 or say at ₹3000. It is also estimated that by 2023 the ridership will touch 36,000 daily. At this peak assuming 100 percent occupants the daily receipts from ticket sale would be ₹10.80 cr or ₹3,942 crores per annum. Would this be enough to pay back the loan? Based on this simple calculation and assuming 0 percent interest and 100 percent occupancy with ticket constant at ₹3000 we should be able to collect ₹1,77,390 crores in 45 years of its operation which is sufficient to meet the loan of ₹88,087 crores and leave a balance of ₹89,303 crores if the Yen-Rupee exchange rate remains constant. What about the operating expenses? We have no idea of the quantum operating expenses as yet. On top of this is the Indian portion of 19 percent. However, the agreement, it is understood, involves training and technology transfer (with or without royalties?). It is also expected that there will be increase in the ticket price in the 45 years of repayment period.

With the financial package being offered along with training and technology transfer, the package becomes attractive. Therefore, this project should be treated as a technology demonstrator which could help the existing railway network in innovation and adaptation in improving their existing technology and help improve rest of the network. However, without this attractive financial package, another bullet train may not be financially viable at the present ticket price.

All said and done we should also consider all other modes of transport if we want to connect the length and breadth of the country with quick transport. While China has built a huge network of HSR (high speed rail), it is reported that they have had to lower the ticket price more than once to fill it up and it has accumulated losses of $300 billion already. Can we risk such a proposition?

Meanwhile, aviation is making inroads into railways’ traditional passenger clientele. In fact, railways had been cross subsidizing its passengers’ fares against cargo, which has led to loss of their cargo to trucks. The Low Cost Carriers of Aviation sector (which dominate over 70 percent of Airline industry) have actually made a dent into the II class tier and above railway passenger market. With double digit growth in domestic passenger aviation and over 900 new commercial aircrafts joining the existing fleet of 400 aircrafts in the next few years, the competition of future bullet trains with aviation will be fierce. It may be further added that Airline industry raises its own funds to finance new aircrafts unlike railways and therefore, do not add any burden to the exchequer. Further, Airports including Airports Authority of India is self-sustaining and pays tax/dividend to government.

Today the largest civil Aircraft A 380 is capable of taking 853 passengers in a single economy configuration. The bullet train will carry 1300 to 1600. Each A 380 aircraft should cost around ₹2,500 crores (Listed price US $375 million). If we allow a shuttle service of A 380 from length and breadth of the country i.e. Dibrugarh to Mumbai; Delhi to Trivandrum; Jaipur to Chennai and many more, it might be able to take the load of passengers off the railways, which can then concentrate on cargo services, their mainstay. Ten such A 380 will cost around ₹25,000 crores and can connect the traffic of at least five cities. And there would be no capital cost to Government. No cost of putting up new lines or stations. No land acquisition. The Railways could then limit itself to provide quick rail service between the airport and the city so that passengers have a seamless experience.

To conclude, Railways, at least for now, should concentrate on improving shorter distance services for passengers and more on their main bread and butter– the cargo services, rather than High Speed Trains (HST), a job which can be better served by Low Cost Airlines.

A thousand butterflies and a can of stout