60 percent of the 9 crore vaccine doses were administered in Maharashtra, Rajasthan, Gujarat, UP, WB, Karnataka, MP, and Kerala.

The Ministry of Health & Family Welfare on Thursday, April 8, released data for the country’s vaccine drive and said that over 9 crore people have been injected with the COVID-19 vaccine. The vaccine was administered to 29.7 lakh citizens on Wednesday, taking the total tally of those vaccinated to 9,01,98,673 citizens. 60 percent of these doses were administered in 8 states- Maharashtra (9.92%), Rajasthan (9.19%), Gujarat (9.03%), Uttar Pradesh (8.7%), West Bengal (7.82%), Karnataka (5.8%), Madhya Pradesh (5.5%), and Kerala (4.6%). Altogether, over 89 lakh healthcare workers and 97 lakh frontline workers have been given the first dose of the vaccine. However, the second dose has only been given to 5 lakh of the former and 44 lakh of the latter, which hints at aspects of vaccine hesitancy. The government also said that 2.36 crore of those aged above 45, and 3.63 crore of those aged above 60 have been administered with the first dose of the vaccine. 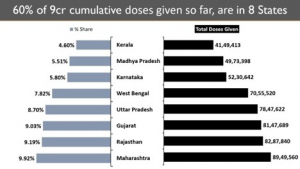 On Thursday, India reported 1.29 lakh COVID-19 cases and 685 deaths. The total death toll in the country now stands at 1.66 lakh. A large majority of these cases are being reported in Maharashtra, Chhattisgarh, Karnataka, Uttar Pradesh, and Delhi, which has also increased the national positivity rate from 2.19 to 8.40 percent. These states, including Punjab, have also contributed the highest number of deaths. 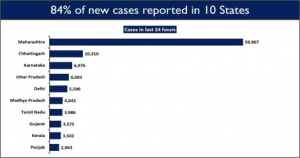 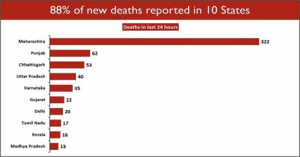 The updated report on vaccination was released a day after the Maharashtra state government claimed that the stock of vaccines in the state was diminishing. The Maharashtra Health Minister Rajesh Tope and Mumbai Mayor Kishori Pednekar said that only 1 lakh doses of the vaccine were left in stock and appealed to the central government for more doses. In retort, Union Health Minister Dr. Harsh Vardhan said that the stock in Maharashtra was diminishing due to the government’s “mismanagement of the vaccine and a careless attitude towards the virus.”

IIIT-Delhi to develop method to predict collision from space debris