After continuous adjournments due to protest by opposition members, both houses were adjourned to meet on March 15th

The third day of Parliamentary budget session’s second half resumed amid increased sloganeering and protests by the opposition members over farmer protests and rocketing fuel prices. However, The 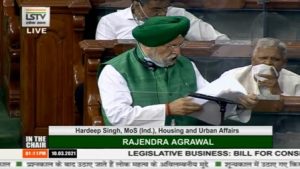 As per the Statement of Objects and Reasons, the Bill provides for the following:

a) to grant unconditional stay of enforcement of arbitral awards, where the underlying arbitration agreement, contracts or arbitral award is induced by fraud or corruption;

b) to omit Eighth Schedule of the Act which laid down the qualifications, experience and norms for accreditation of arbitrations; and

c) to specify by regulations the qualifications, experience and norms for accreditation of arbitrators and the said amendment is consequential in nature.

The NCT Bill seeks amend the National Capital Territory of Delhi Laws (Special Provisions) Second Act, 2011. It will also replace the NCT of Delhi Laws (Special Provisions) Second (Amendment) Ordinance, 2020 (Ordinance No. 15 of 2020) provides for extension of the validity of the Act of 2011 for a period of three years from 1st January, 2021 to 31st December, 2023. “The National Capital Territory of Delhi has been growing phenomenally over the last many years, putting a heavy strain on its infrastructure and resources and inter alia, leading to an ever-increasing demand for housing, commercial space and other civic amenities,” the Statement of Objects and Reasons reads. Largely, the bill aims to relocate jhuggi-jhopdi dwellers and regularise unauthorised colonies by the extended deadline.

During the Question Hour in Lok Sabha, Shiv Sena MP Prataprao Jadhav inquired about the introduction of a bullet train between Mumbai and Nagpur. While expressing disappointment over delay in acquisition of land in Maharashtra, Minister for Railways, Piyush Goyal, respond by saying that the first train would be functioning between the Mumbai-Ahmedabad lines.

During the zero hour, the issue of the alleged suicide by seven-time MP Mohan Delkar was raised by Shiv Sena’s Vinayak B Raut and Janata Dal (United)’s Kaushalendra Kumar. Both pushed for inquiry into the case, and especially into the role of local administrative bodies.

In the Rajya Sabha, there was a spat between the opposition and ruling party members when Deputy Chairperson denied Leader of Opposition Mallikarjun Kharge’s request to discuss the farm laws under Rule 267. “It is unfair to discuss other laws when thousands of farmers have been sitting at the Delhi borders for 104 days, with over 275 of them losing their lives,” Mr. Kharge said. However, BJP member Bhupendra Yadav cited rule 169 and said that the issue cannot be discussed right now as it will be discussed at its due time in the same session.

After continuous protests by opposition members and multiple adjournments in both houses, the Parliament was adjourned finally to meet on March 15th, Monday.

BJP can wish to break the alliance, but MVA will remain committed to the people of Maharashtra: Vandana Chavan, MP

Study kindles new hope for a cure for Parkinson’s Disease