BJP can wish to break the alliance, but MVA will remain committed to the people of Maharashtra: Vandana Chavan, MP

The former mayor of Pune and two-time Rajya Sabha MP expresses hope in the upcoming municipal elections; adds that BJP has lost touch with common people.

Nationalist Congress Party’s Vandana Chavan completes her 9th year in the upper house of the parliament. Since assuming office in April 2012, Mrs. Chavan has been vocal about the issues of climate change, children, and women’s reservation in parliament. In an exclusive interview with Delhi Post, Mrs. Chavan discusses the issues of parliamentary subjugation of the opposition, the impact of COVID-19, and the politics between Maha Vikas Aghadi (MVA) and BJP in Maharashtra. Following is an edited excerpt of the interview:

Delhi Post: What is the current socio-economic scenario of your state, Maharashtra? 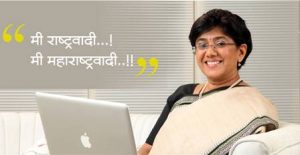 Vandana Chavan: The pandemic has taken a major hit all over the world and India, specifically Maharashtra and Pune, is no exception. Maharashtra was doing quite badly during the pandemic. Pune, too, had serious numbers. It was a challenge to address that. The entire global economy has taken a massive hit, and we all need to work together to come out of it. Pune, Mumbai, Maharashtra, India, all of us have great challenges ahead of us.

Delhi Post: Maharashtra, and particularly Pune, bore the brunt of the COVID-19 pandemic. What were the top strategies implemented to get the virus in control?

Vandana Chavan: Mumbai is a major hub where people from various countries come in. More than 50 percent of the population also stays in slums in very dense localities. The initial problem in Mumbai and Pune was where the patients are to be taken and what kind of medication should be given. Across the nation, the most honest figures about infection and death rates were brought out in Pune and Mumbai. There was aggressive testing, contact tracing, and because of this stringent tab on identifying those infected, our numbers looked big. The entire administration, the doctors, the frontline workers, all took it up as a major challenge. I feel happy to say that only a few people have to wait till they reach a stage where they need a ventilator. As soon as a person sees the minimum symptoms, they approach the doctors, who then advise and keep a tab on them. Most of the patients get better from home-based treatment.

Delhi Post: Several parties in the state, NCP included, have expressed concern over the agricultural laws recently passed by the central government. How would they impact the lives of farmers in a state that has seen a rise in MSP in the last few years?

Vandana Chavan: The state of Punjab and Haryana are majorly impacted. The issue is pan-India and the farmers are concerned about how the MSP will be ensured to them. The 3 farm laws were passed with great haste and a proper opportunity was not given to the opposition. This kind of bulldozing by the government is unacceptable. There has to be dialogue to understand the repercussions. Had that happened, we would not have seen the scenes that we are seeing today. Unfortunately, the farmers have had to stay in the open, in cold, and in rains. They have been agitating for so many days now. The people it is meant for have to be happy with the laws. If they are not satisfied, then the government has to rethink.

Delhi Post: In your years as a politician, you have been vocal about environmental concerns. Do you think the central government’s decision to dedicate over 2000 crores to tackle pollution levels in 32 urban centers is the onset of climate change becoming an electoral concern?

Vandana Chavan: Climate change challenges the very existence of humankind. Scientists across the globe have brought forth the idea of climate change being anthropogenic. It is happening because of how we have degraded the environment and dropped the natural resources to limits that are beyond what the earth can take. It is important to wake up and see the impact of climate change. Carbon Dioxide in the air keeps increasing every day and we must bring down our carbon footprint if we have to follow the guidelines of the Paris agreement. Every country will have to contribute. A major concern is that while countries are taking initiative, it is not percolating to the ground roots. Until that happens, we will not see any action being taken.

Cities are becoming gas like chambers as respiratory diseases are increasing. In fact, it is killing 1.4 million people yearly. The kind of budget provision that has been made just now for 32 cities is minimal. Greenpeace in its report said that 213 cities had limits of PM10 much higher than the limits given by the CPCB. The present budget only targets 32 cities, which is way below. It is unfortunate that of the top 20 most polluted cities, 15 are housed in India. The allowance to 32 cities is peanuts. If we really love our children, I think that becomes a responsibility that we give them a healthy future.

Delhi Post: What sort of challenges have you faced in the last 8 years as a woman in the upper house of parliament? Please shed light on the Women Reservation Bill that aims to reserve 33 percent of all seats in the Lok Sabha and state legislative assemblies for women?

Vandana Chavan: As a woman, I have not faced direct discrimination. I have studied in a co-ed school and worked as a lawyer, which on its own is a highly male-dominated area. After that, I came to the municipal corporation where the 33 percent reservation happened. I have worked with male colleagues. There have been a few incidents, but I cannot isolate them as gender-based discrimination. It happens with men too. We, of course, have challenges and if we stand up to them we can do a good job. Coming to the reservation bill, it is high time that reservation in state assemblies and parliament comes in. We don’t seem to be going above our target of having even 20 percent women in the present scenario.

At the local self-government, in 1993, the 73rd and 74th Amendments introduced the 33 percent right from the village panchayat to the municipal corporation. That is now 50 percent and we see several women now in decision-making positions. Unfortunately, however, we don’t see the same happening in the state and the center. The government at the moment has huge numbers in the parliament, and they are able to push all the bills. I do not understand why they are not ushering in the 33 percent reservation bill for the state and central governments.

Delhi Post: Even with civic polls a year away, the BJP has reportedly started organizing workshops for its corporators. What is your party’s anticipation for the polls? Please comment on how you think the BJP performed in the last 4 years in the Pune Municipal Corporation.

Vandana Chavan: In the 4 years that the BJP has been in power, there has been no connection with the people. Also, it is unfortunate how wards were designed in the previous municipal corporate elections. Having 4 corporators in 1 ward led to people being about their candidate. Unfortunately, they were not voting for the person who would be representing them in the elections, but for Narendra Modi. That is not how a local body needs to function. It needs to have efficient elected representatives and those who have a vision for the city. These are the places where grassroots interventions happen, which is important if we have to address the issues of climate change, poverty, housing for the poor, and others.

I feel that it is important that elected representatives at the local level should have a fantastic connection with the people. Unfortunately, we don’t see that with the present dispensation. As far as the workshops are concerned, NCP has been having continuous training sessions. It doesn’t happen only when elections come close. I can assure you that when BJP conducts its workshops, it is more about how you gain votes by cheating people. It is not about what you are going to do for the city, or the kind of vision you will carry. In our party, both elected representatives and party cadre have workshops where we try to build their vision and try to understand MDGs and SDGs. We make them understand climate change and how they need to look at it. Even for our manifesto, it is a participatory process. Each karyakarta is given the responsibility to reach out to the people with a form where people put in their wish list. That is what forms our manifesto. It is a participatory process, and that is what a sustainable model is.

Delhi Post: Ever since the MVA alliance came into power, Maharashtra has become an ideological and political battleground between the state and central governments. Please share your opinion on the same.

Vandana Chavan: As far as the MVA is concerned, all 3 parties (NCP, Congress, Shiv Sena) are all committed to whatever they have undertaken under their common minimum program. They have a fabulous dialogue. Undoubtedly, the BJP is extremely disturbed that we are doing well. They keep throwing little statements into the public domain where they want people to feel that we are unstable. The MVA alliance is on the right path and they are committed to Minimum Common Programme that they have. COVID has been a classic example where we have been able to come out of a dangerous situation. We have been able to address issues with complete consensus, and following a particular agenda. No matter how much BJP tries to disturb us, it is not going to work. BJP probably feels bad that their erstwhile partner has been lost to them. (SS) We say in our speeches that no matter how many dreams they might have to break the alliance; it is not going to happen. MVA is going to stand tall for its commitment to the people of Maharashtra.