About 40 per cent of the world’s population lives within 100 km of the coastline making it crucial to have a healthy marine ecosystem as these people are the direct beneficiaries of the marine food web. 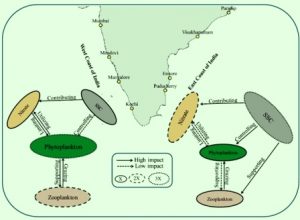 Anthropogenic stressors such as nutrient loading, light penetration, and mixing within the water column affect aquatic biodiversity impacting the seafood web. Primary production of phytoplankton is often enhanced by nutrient loading from various sources like coastal freshwater runoff/rainfall, upwelling, and cyclones/depressions including fertilizers, sewage, animal waste, atmospheric inputs and coastal aquaculture. But at the same time, it is often depressed by the high turbidity water via sediment discharge producing Suspended Solid Concentrations (SSC) which influences the transparency or light availability that ultimately affects the growth of phytoplankton in coastal waters.

Phytoplankton is an indicator of primary marine productivity and an important component of the seafood web on which regional fisheries depend. This phytoplankton biomass significantly alters the food web and ocean’s ability to absorb atmospheric carbon. Scientists at the National Center for Coastal Research (NCCR) have explored how changes in primary producers of phytoplankton are affecting the secondary producers of phytoplankton biomass in the complex coastal ecosystem of the Northern Hemisphere between the Arabian Sea and the Bay of Bengal in the eastern part of the country. According to NCCR scientists, the baseline observations noted through the present study will help to understand the trend and type of food web operating along the Indian coastline and accordingly the role of food preference of zooplankton on fishery yield could be understood.

In addition to the monsoonal runoff and regional processes, the phytoplankton biomass along the Indian coast may be influenced by anthropogenic inputs through river discharge. Nutrients such as nitrogen, phosphorous and silicate play a key role in phytoplankton abundance, growth and metabolism. However, higher concentrations of nitrate were found in the East coast of India (ECI) than in the West coast of India (WCI). Despite higher nutrients are found along the ECI due to discharge of major rivers,  threefold higher phytoplankton biomass has been observed along the WCI than the ECI due to high suspended solid concentrations (SSC), brought by rivers to the ECI that inhibits light penetration into water column leading to low phytoplankton biomass. On the other hand, rivers also bring terrestrial organic matter along with SSC to the coastal region that may be supporting zooplankton carbon needs in the ECI.

The authors of the present study said that phytoplankton biomass growth is minimum along the ECI due to higher load of SSC and removal of nitrate is also minimum. However, zooplankton population was supported more by phytoplankton biomass along the WCI whereas terrestrial organic matter brought by river in the ECI. Researchers believe that due to the ongoing climate change, world fisheries are economically suffering a lot. As per recent records on fisheries, the southwest coast provides 31 per cent of the fishery yields and 26 per cent are from the southeast coast.

The modification of river discharge (mainly reduction) may reduce terrestrial organic matter inputs to the coastal regions that may lead to a significant decline in zooplankton biomass and therefore fisheries population. An estimate suggests that global warming could cut the value of world fishery catches from 41 billion dollars a year to about 17 billion dollars a year by 2050 with East Asia and the Pacific suffering the greatest losses.