The qualifications required for the patent examiners are absent in the Act or Rules. This needs to be addressed sooner for the significance it may have in the current scenario. 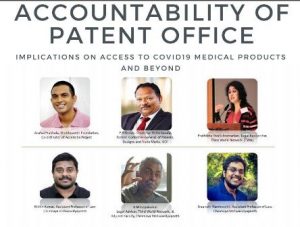 examine the Patent Office’s accountability and performance. “Patent Offices in India act as ‘Gatekeepers’ between the patent holders and the public by accommodating public interest constructively. However, the threat of corporate monopolies needs to be balanced out” said K. M. Gopakumar, Legal Advisor, Third World Network (TWN). He pointed out that the Indian patent law holds a high threshold to guarantee access and avoid weak or bad patents. Moderating the webinar on “Accountability of Patent Offices: Implications on Access to COVID-19 Medical Products and Beyond”, Gopakumar raised the fundamental questions: Does the patent office uphold the spirit of law in its functioning? If it is not up to the mark, then what is at stake?

Nithin Kumar, Assistant Professor of Law, Chinmaya Vishwavidyapeeth (CVV), stressed on the role of the Patent Office to balance the interest of the public with that of the industry, access to that of incentives to invent.

Acahal Prabhala, Shuttleworth Foundation, Coordinator of Accessiba Project, citing a study from Accessibsa Project, shared that 72 per cent of the pharmaceutical patents granted were secondary patents. The cost to have the patent revoked is too high making it difficult for the pro-health activists or others to challenge a patent once given. He also commented that the Indian patent office and law require a relook in order to effectively deal with high-end technologies like biologics. “We are granting patents to technologies that we ourselves are not able to comprehend”, he said.

Prathibha Sivasubramanian, Legal Researcher, TWN, added to the discussion by signalling the callous nature with three patents provided to Remdesvir, a promising COVID-19 drug prescribed for emergency cases. For the first one, she opined that the patent office erred by not objecting to the vague and broad ‘Markush’ claims of the first patent. It can lead to consequences, which are not contemplated or supported by the description within the patent claim.

The second patent claim granted had no in vitro or in vivo test to prove the efficacy as mandated by the Supreme Court in case of Novartis. In the third patent granted, the patent office has overlooked the lack of novelty and failure to establish non-obviousness, i.e., the third patent of Remdesvir fails even in the basic patentability criteria.

Acahal explained that the companies and pharmaceutical producers have already profited from the pandemic situation. Gilead Sciences Inc., the patent holder of Remdesvir, has seen a sharp increase in its market capitalisation in the last three months. This means the companies can benefit just by showing positive progress in vaccine development or a drug at hand. Prathibha noted that Gilead had already signed voluntary licenses with Indian companies including Cipla, Ferozsons Laboratories, Hetero labs, etc. for production of the drug.

On the other hand, the price of the drug is fixed at Rs 20,000 for a single vial, whereas the manufacturing 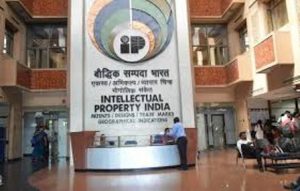 cost is only around Rs 70 per vial. This means that a five-day emergency course of medicine costs Rs 100,000 over the hospitalisation expenses. In many serious cases, courses extend upto 10 days. In this context, Prathibha questioned the significant public investment that has happened for the drug. It creates a double burden on taxpayers with initial public investment and later a steep out of pocket expense due to the high drug price.

P. H. Kurian, Chairman RERA – Kerala, Former Controller General of Patents, Designs and Trade Marks, Government of India,and also the one who had been the man-in-charge of the Patent Office, expressed his concerns for the errors that take place while granting patents under the implication of law. He opined that the law was not properly amended and the personnel found it difficult to comprehend. Kurian had pushed for the development of clearer guidelines to make the process more transparent. While in position, he had also proposed for effective and specialised training for the patent examiners by segregating them into groups.

Gopakumar pointed out that the qualifications required for these patent examiners are absent in the Act or Rules. This needs to be addressed sooner for the significance it may have in the current scenario. He also pointed out that the reports submitted by these qualified examiners to the Controller – General is considered confidential by law and need not be presented even before the courts. This further puts the accountability of the office into question.

Sreenath Namboodiri of CVV in his concluding remarks, summarised the discussion and asserted that the lack of structural integrity, political and bureaucratic influence over the patent office poses several concerns over the granting of patents to companies. All the panellists concur in their opinion that the patent office needs take into consideration of the present precarious status of licensed monopoly market and global public good nature of the COVID-19 treatment before granting further patents to COVID-19 medical products.

The webinar was hosted by Chinmaya Vishwavidyapeeth, in association with TWN Trust on 13 June 2020.

The writer is an undergraduate student at Chinmaya Vishwavidyapeeth, Ernakulam, Kerala. He can be reached on twitter @Nava_Krish1

NEERI to Teach Sanitisation Techniques to Homeless and Migrants

A World in Total Darkness