The structural weaknesses of WHO are nothing, but continuance of intellectual legacy of colonial times. This needs to be remedied through a more inclusive norm-setting operations and more active commitments from wealthier nations.

The inefficiencies in dealing with COVID-19 crisis are due to governments, which have failed to invest 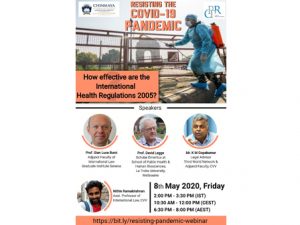 Burci opined that neoliberal approaches will not work in times of emergency and such models have failed us in COVID-19 resistance, and therefore States need to invest. He didn’t fail to absolve WHO from the responsibility which is currently shrugging off, i.e., to invite nation states and their leaders to its good offices for the reconciliation of their disputes and suspicions. He said the current officials of WHO must take up active diplomacy to establish a better coordination at the global level. Further, Burci requested nation states and people to look introspectively about the standard of compliance their governments have undertaken with WHO’s recommendations rather than blaming any particular country, community or individual. He also pointed out that the declaration of Public Health Emergency of International Concern (PHEIC) has been introduced as a depoliticised mechanism in International Health Regulations (IHR) 2005, the legal text enabling WHO to coordinate the actions during an outbreak like COVID-19 pandemic. Its current functioning is alleged to be contrary and to have involved power dynamics of member states. Burci also opined that the current system within IHR of identifying outbreaks or epidemics as international emergency is not efficient. “Either Emergency or otherwise nothing” policy creates, on one hand, unnecessary delay in declaration of emergency, and on the other hand, contributes to panic among the world population. In reality, the public health emergency may be area-wise, granular and fatal than current pandemic. Since the IHR cannot help in those circumstances, a more efficient alert system is required. Hailing from Italy, Burci admitted that even the investments in public health by Italy are not sufficient.

David Legge suggested that the entire performance of the nation-states and WHO must be viewed from the framework of colonisation and protection of the interests of great powers.

He called out the fact the powerful countries have frozen the mandatory contributions to WHO and its funding is now completely dependent on donor funds (donations). He opined that when funds are donor based then there occurs undue priority setting in the international institutions. He remarked that the most of the nations which failed in achieving the core capacities in national public health systems are those countries from which the wealth has been drained off by the colonial powers. 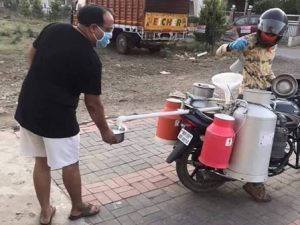 David Legge reminded that member states were not keen in enhancing the powers of the WHO during the adoption of IHR 2005. It was the then Director General Brundtland who helped including the provision to consult with non-governmental sources for corroborative information against the wishes of member states. He also recalled that a provision for direct on-site verification was also diluted by the member states. Now it just remains as a mere consultation with the affected states. Further he said that the IHR 2005 fails to address priority settings regarding the research and development and commodity production. Also, it fails to address the ecological and economic factors shaping the genesis of pandemic diseases.

KM Gopakumar called for more transparency and accountability in the meetings and decision-making of the Emergency Committees during the determination of the PHEIC. He criticised that the minutes and the evidence considered by the Emergency Committee are not published for public scrutiny. He highlighted the fact that concept of “health security” manifested in the IHR 2005 has a baggage of close association with military establishments of many colonial countries and the US. According to Gopakumar, it is this baggage which creates suspicion in the minds of the political leadership, which stands in the way of international coordination.

Gopakumar also pointed out the institutional weakness within WHO, where the Director-General is not barred from taking a second term in the organisation and most director generals wanting to have a second term.

He didn’t fail to note the success of Ms Brundtland as the Director-General. “But she didn’t have a second term”, underlined Gopakumar. He agreed with Legge’s and Burci’s remarks that neoliberal approaches or private investments in the public health cannot solve the issues like COVID-19 pandemic. However, he cautioned that nations will not invest in public health systems just to face pandemics. They need to build a robust health system, as a whole, and development assistance has to provide on a larger scale. Gopakumar requested not to fragment international law governance mechanisms further while revising the IHR 2005.

Summarising the discussions and points raised by the panellists, Nithin Ramakrishnan shared that all the panellists concurred that the future agenda needs to be the revamping of the International Health Regulations, 2005. The structural weaknesses of WHO are nothing, but continuance of intellectual legacy of colonial times. This needs to be remedied through a more inclusive norm-setting operations and more active commitments from wealthier nations. Panellists called for more support to WHO, despite its shortcomings, in the resisting the spread of COVID-19 pandemic.

The writers are undergraduate students at Chinmaya Vishwavidyapeeth, Ernakulam, Kerala. They can be reached on twitter
@Nava_Krish1

Migrant Workers from the Gulf: An Exodus that Can’t be Downplayed