As the Budget session of the parliament resumed for its second run on Monday, March 8th, both Rajya Sabha and Lok Sabha were adjourned amid opposition roars over sky-high petrol and diesel prices in the country. 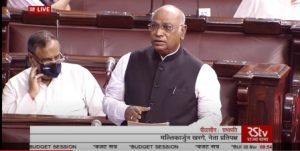 On the first day of the resumed Budget session, the Rajya Sabha was supposed to hold discussions on the Arbitration and Conciliation (Amendment) Bill, 2021, The National Institutes of Food Technology, Entrepreneurship, and Management Bill, 2019, and on the Medical Termination of Pregnancy (Amendment) Bill, 2020.  While the Rajya Sabha session began with a Zero Hour at 9 AM and saw statements from multiple women parliamentarians on the occasion of International Women’s Day, it came to a halt minutes after the Question Hour began.

Leader of Opposition Mallikarjun Kharge submitted a notice and requested to suspend all business to discuss the rising petrol and diesel prices. “Sir, it is an important issue. People are agitated and we are requesting you to suspend all rules under Rule 267 so that we can speak on this subject. The petrol price is now Rs 100 per liter, and the diesel prices are over Rs 80 per liter. Nearly 820 percent of petrol and 258 percent excise duty and merely 21 lakh crores have been collected,” he said. “Because it is an important issue, I have allowed you to mention it. But seeing that suspension of Rule 267 is under the dispensation of the chair, I have decided that there are enough opportunities to discuss it during the Appropriation Bill,” M. Venkiah Naidu said.

“Farmers are suffering in the entire country,” Kharge said as slogans arose from both sides. However, amid direct confrontations from several parliamentarians, the house was adjourned until 11 am, and finally for an entire day after sloganeering from the opposition held up regular proceedings.

In the Lok Sabha, the session was adjourned twice by speaker Om Birla after cries by the opposition to discuss the hike in petrol and diesel prices. As per the LOB, the lower house was supposed to hold discussions on The National Capital Territory of Delhi Laws (Special Provisions) Second (Amendment) Bill, 2021, along with The Constitution (Scheduled Castes) Order (Amendment) Bill, 2021.

Upon being asked by the speaker about the Women’s Reservation Bill, Adhir Chaudhry, Leader of Congress, Lok Sabha, said, “The bill should be passed right now; today itself. We also need to discuss how the petroleum and diesel prices can be put on control.” The speaker, however, reiterated that the discussions on the topic can be held during discussions on the Appropriation bill.

Rajya Sabha Chair and Lok Sabha Speaker Om Birla announced that the sessions for both houses will be held from 11 AM to 6 PM, from March 9th onwards as was held before the COVID-19 pandemic.