In the spirit of a deliberative democracy, the Parliament of India needs to function without disruptions in the coming Monsoon session. 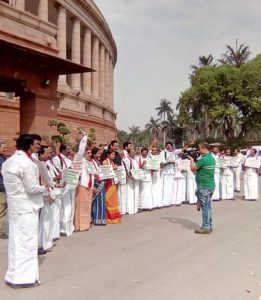 he Budget Session 2018 of the Parliament was a sham and conducted no serious business. The whole session witnessed almost no business in both the Houses with disruptions and forced adjournments dominating the affairs of the Parliament. This causes a severe dysfunction of the Parliament and brings disrepute to a functional (Indian) democracy. There is, in fact, hardly any incremental difference from previous cases of Parliament logjam during the past United Progressive Alliance (UPA) regimes to the present National Democratic Alliance (NDA) Government.

The Monsoon session of the Parliament in 2017 was noticeable for its intolerable disruptions and the suspension of six Congress Members of Parliament (MPs) for five days for their unruly behaviour. And the normal schedule of the winter session (2017) was also delayed by almost a month. It began on December 15 and concluded on January 5 2018. The actual sitting of the session was just 14 days, the lowest in the last decade.

Unlike previous speakers, speaker Sumitra Mahajan tried to run the House by ‘forced session’ rather than by forced adjournments, in effect producing a “bulged graph or data” in terms of ‘sitting hours’ or the productivity of the House.

“The frequency of disruptions in the Houses challenges the very decency of a deliberative democracy. In 2013, on the eve of the Independence Day, former President Pranab Mukherjee lamented that ‘we need a Parliament that debates, discusses and decides’.”

In 2015 also, he expressed the same concerns in stronger terms that ‘the Parliament has been converted into an arena of combat rather than debate’.

In his first speech in the House, the new Vice-President and the Chairman of the Rajya Sabha, Venkaiah Naidu also observed that ‘obstruction and disruption of proceedings is inherently being chosen as the first parliamentary option’ rather than other available measures. Public esteem towards the top organ of democracy is at a low, ever since the politicians started showing disrespect to its basic decorum. The 15th Lok Sabha recorded the highest percentage of time lost due to disruption and adjournments and gained the dismal status of the worst performing Parliament.

The disruption and malfunction at the state-level legislatures also paint a more dismal picture. Some of the democracy assessment groups grade India as a ‘flawed category of democracy’. However, India, more often, officially prides itself as the largest functioning democracy. People have great expectations, and the Parliament should work and deliver to its appropriateness and to the hopes of its citizens. The essential idea of deliberative democracy is that policy and the laws should be the upshot of the legislatures. Debates and deliberations in the Parliament cannot be seen as a parliamentary ritual. And disruptions cannot be viewed as a ‘crucial aspect of the performance of deliberation and representation in parliamentary debates’.

However, all forms of legislative disruptions cannot be discounted. Some have both functional and dysfunctional consequences. Disruptive acts having democratic element can legitimately contribute to deliberative democracy. ‘Disruptive acts’ within the tolerable limit often stimulate an informed debate. Democracy contains meaningful opposition, protest, dissent, disobedience and disruption.

Nonetheless, Parliament as an institution of democracy is significant as a deliberative body. Legislature fails when the exogenous protest creeps into the deliberative spaces as legislative disruptions ends in total breakdown of Parliament. A responsive legislature can translate a significant protest ‘outside’ by civil society into a democratic deliberation leading to meaningful solutions. However, on most occasions, the Parliament has failed to resonate or echo the genuine protests of people.

In the past, the UPA governments and its leaders had failed to give the Parliament its due stature and seriousness. For instance, the 2008 Monsoon session was completely abandoned from the parliamentary calendar. Frequent changes in the normal sitting schedule of the sessions, less number of sittings for the sessions, bypassing Parliamentary sanction and implementing policies of far-reaching impact on people, passage of the important bills including the budget without proper debate in Parliament, grave failure and inefficiency in bringing consensus on issues and wise floor management during the sittings of the Houses, among others, were the order of those days. Now, the ruling NDA emulates the same principles of confrontation.

“The Opposition is equally responsible for the present predicament of the Parliament. While an obstinate government could not appreciate the democratic merit in the ‘disruptive acts’ or the demands of the opposition, the aggressive and frustrated Opposition failed miserably as an effective and responsible one.”

On many occasions, forced adjournments are made due to the disruptive behaviour of a few MPs in the opposition. The test here is not the number of MPs, but the democratic content in such disruptive activities, and the Government should come up with practical consensus and solutions. MPs rushing to the well of the Houses and shouting near the Speaker/Chairperson’s podium and snatching and tearing the bills or banging the placard on the speaker’s podium cannot be seen as tolerant behaviour. Such unruly behaviourism should strictly be disciplined, and the MPs involved should be brought to book by invoking the rules and procedures applicable to the conduct of business of the Houses. To invoke such measures and discipline, the presiding officers of the Houses need the support of other members of Parliament and leaders of the Houses. However, in practice, may be due to political exigencies, the presiding officers often fail to invoke such disciplinary measures following the objection by the other members.

The ever-increasing behaviour of disruptions is proving costly for democracy and such a situation demands formal and structural reform measures to address the problem. There are formal procedures and institutional mechanisms such as codes of conduct, ethics committees, etc. Unless and until operational, these measures prove ineffective and worthless. Singular handling or quick invoking of the rules to discipline the deviant MPs may not work and often be counter-productive. Consistency and consensus are the thump rule. Naming and suspension of MPs are rarely in practice in both the Houses. Some rules such as Rule 374A – a rather newly incorporated rule in the Rules of Procedures of the Lok Sabha in December 2001 – which gives the power to Speaker to suo moto suspend an unruly MP for coming to the well of the House without a motion being moved and adopted by the House. Nevertheless, this rule had never been invoked till the Monsoon session of 2013. It took nearly 13 years to make it operational by the then Lok Sabha Speaker, Meira Kumar and she named 12 MPs under this Rule 374A and suspended them from the sitting of the house. Thereafter, 17 MPs in the Winter Session of 2013 and 25 MPs in the Monsoon Session of 2015 were suspended under this Rule. This shows that this Rule is slowly getting operational.

“The constitutional position of presiding officers can also play a greater role in maintaining the decorum of the Houses. For this, they have to delink their politics of allegiance and show an unbiased integrity to the position.”

But in practice, it is very hard for various reasons. The total accord and unity from all political parties is a prerequisite in invoking the provisions in the rule book. The premise of such measures should be the principles of deliberative democracy. Ultimately, good politics can fix many of the issues that the nation faces today. Intolerable disruptions and dysfunctions can no longer build a functioning democratic institution.

Session after session, we are witnessing an increasing trend of disruptions and a total or a near-total washout with almost no business. For this upcoming Monsoon session and the rest of the sessions of the Parliament, let the political class decide whether it wants to run it or not, because ‘WE, THE PEOPLE’ have a direct interest in the productive functioning of democracy.

I look for roles beyond gender, genre: Rajshri Deshpande