While supporting all the demands raised by SKM in its recent statement welcoming the repeal of the laws, MAKAAM believes that addressing the concerns of women farmers across marginalised sections calls for several structural reforms. 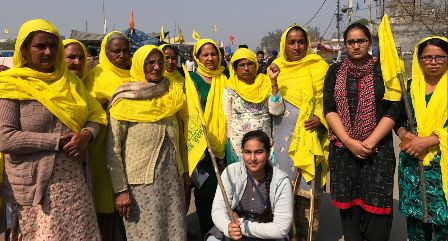 Parliament vindicated the historic protest of the farmers who refused to back down, even in the face of adversity, said MAKAAM (Mahila Kisan Adhikaar Manch) in its statement.

Over the past one year, the farmers’ protest on the borders of the national capital has seen the visible and overwhelming participation of women farmers and workers from various districts of Punjab, Haryana, Western Uttar Pradesh, Rajasthan and Chhattisgarh. The protesters were supported by farmers across several states such as Telangana, Andhra Pradesh, Karnataka, Tamil Nadu, Uttarakhand and Maharashtra in which women have also participated in large numbers. Women farmers were seen not only in the protests, but they also contributed towards mobilising support, spreading awareness about the anti-farmer laws, raising funds, and sustaining the protests sites across the different borders in Delhi as well as within Punjab.

In its statement, MAKAAM mentioned that while it has always stood firmly with the Samyukta Kisan Morcha (SKM) and the farmers’ movement, which has demanded the repeal of the three laws, bringing in a guarantee for remunerative pricing and withdrawal of the Electricity Amendment Bill, it believes that in the medium to long term, protecting farmers’ rights, especially women farmers’, small and marginal farmers’ rights is not only about ensuring markets and remunerative prices. Hence, according to MAKAAM, bringing in structural reform that advances farmers’ rights over resources and ensuring that these rights are protected, ensuring the necessary investments in agriculture that promote bio-diverse models based on agro-ecological principles in agriculture that ensure diversification of crops, providing for protective irrigation and other required infrastructure for promoting bio-diverse and chemical-free models, and providing support for other agricultural inputs are critically important. It wants reforms in agriculture that bring in large-scale investments in enhancing and protecting the rights and interests of the majority of the farmers and not that of agri-businesses alone.

MAKAAM had earlier articulated the need to engage with women farmers in a systematic or sustained manner keeping in mind the specific problems, concerns and needs of their caste, class, and multiple identities in the rural agrarian structure.

According to MAKAAM, the overarching issues of concern for women farmers across the country are primarily related to their lack of recognition/identity as farmers, their lack of ownership and control over key resources such as land, water, forests and commons, the gendered barriers in accessing key services and support systems related to farming such as credit, seeds, agricultural extension services, technology, marketing, insurance, etc. Further, women farmers also lack membership and leadership roles in institutional spaces such as farmer cooperatives, producer organisations, etc.

While supporting all the demands raised by SKM in its recent statement welcoming the repeal of the laws, MAKAAM believes that addressing the concerns of women farmers across marginalised sections calls for the following:

Mahila Kisan Adhikaar Manch (MAKAAM) or Forum for Women Farmers’ Rights is a nationwide informal alliance of more than 120 individuals and organisations of farming women, women farmers’ collectives, civil society organisations, researchers and activists, drawn from 24 states of India, to secure due recognition and rights of women farmers in India.