MAKAAM wants the Government of India to ensure that women farmers get due recognition this 15th October 2020 by the government marking the day all over the country as National Women Farmers’ Day, in addition to implementing various recommendations that have been put forth in the Doubling Farmers’ Income.

The Modi government, which recently came out with three controversial farm laws, as part of its efforts to double farmers’ income, is likely to miss the national Women Farmers’ Day on 15th October this year too. The BJP-led 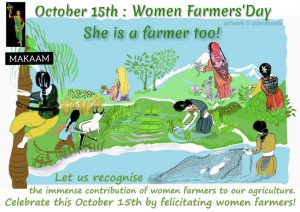 government had announced and marked October 15th, International Rural Women’s Day, as Women Farmers’ Day in India in 2017 and subsequently followed it up with detailed deliberations and felicitations in 2018. However, the newly-initiated tradition was abandoned in 2019 and it is not clear if any plans are underway to mark October 15th in 2020 as Women Farmers’ Day.

Mahila Kisan Adhikaar Manch (MAKAAM) has raised the issue as no plans have been announced by the government so far to mark the Women Farmers’ Day this year too. MAKAAM did immense advocacy over the last few years to get the day recognised as the Women Farmers’ Day by the government. According to MAKAAM, women put in the most labour into keeping agriculture going in the country. Most women are counted as workers in the agriculture sector, more than in any other sector. Indian farming and women are inseparable in that sense. However, they are not recognised as ‘farmers’ in their own right. Their rights and entitlements to resources, schemes and decision-making spaces are highly unequal, when compared with male farmers. The recent COVID-19 pandemic and lockdown in the country put undue burden on them and marginalised them further, including in rural employment schemes. Against this background, it is important that the Government of India celebrates October 15th as Women Farmers’ Day, and also sends out an advisory to all state governments to do so too.

As per the statement by MAKAAM, it would be entirely appropriate for the government to issue identity cards to women farmers (de-linked from land ownership, as has been rightly defined in the National Policy for Farmers 2007) and felicitate them on this day.

Also Read : Agri Acts Not in the Interest of Women Farmers: Says MAKAAM

Those women farmers who have successfully practised agro-ecology or have been seed custodians and conservers of agro-diversity and protectors of forests can be specially identified and appreciated for their invaluable contribution to India’s food sovereignty and forest heritage. There are also Farmers’ Producer Organisations (FPO) leaders who are women farmers, who have ensured that their members earn better incomes through collectivisation and better interfaces with markets. Women from the spheres of pastoralism, fisheries and forest protection/conservation can also be supported for their contributions. 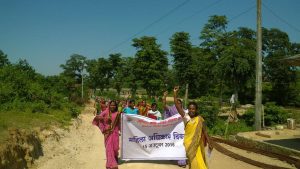 MAKAAM has requested the Government of India to ensure that women farmers get due recognition this 15th October 2020 by the government marking the day all over the country as National Women Farmers’ Day, in addition to implementing various recommendations that have been put forth in the Doubling Farmers’ Income Volume XI, by the Dalwai Committee. It has also urged to put out a fresh advisory to all concerned (including to state governments) to allocate at least 30 per cent of the budgets for women, along with expenditure statements to indicate if such budgets have been used. Further, it wants at least 30 per cent of all-women FPOs, out of the 10,000 FPOs, to be supported by the government.

MAKAAM is a nation-wide informal network of hundreds of organisations and individuals committed to empowering women farmers, and securing due recognition and entitlements for their immense contribution to Indian agriculture and food sovereignty. The forum is active in more than 20 states across India.