All ‘wastelands’ are not degraded lands; we need to revisit the definition of ‘wastelands’. 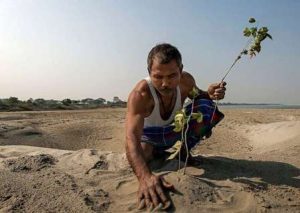 But there is long way to go and some strategies need overhauling. Expressing concern over the prospect of developing solar photovoltaics (PV) technologies on degraded lands, Dr Nitin Pandit, Director, Ashoka Trust for Research in Ecology and the Environment (ATREE), Bengaluru, said that all ‘wastelands’ are not degraded lands, we need to revisit the definition of ‘wastelands’ and ‘wastelands classification system’.

“Cost benefit analysis and scientific inputs could play a vital role in formulation of effective policies for restoration of wastelands and degraded lands”he said.

During his talk he urged CSIR-NEERI scientists to work with International Union for Conservation of Nature (IUCN) to develop internationally acceptable and verifiable metrics to assess the degraded lands and wastelands. He also briefed about the ‘Wastelands Atlas’ brought out by Ministry of Rural Development to effectively assist in rolling back wastelands for productive use through various land development schemes and programs. Mr Umakant also informed that since 2014-15 approximately 7 lakh water harvesting structures have been created and additional area of 14.55 hectares has been brought under protective irrigation by the state government. He stated that India has so far restored 23 million hectares degraded land whereas the international commitment is 26 million hectares.