Rising number of environmental refugees in the world

Climate change and its potential to trigger violent conflicts and mass migration needs to be considered as an urgent priority by policy makers, business leaders and the world. 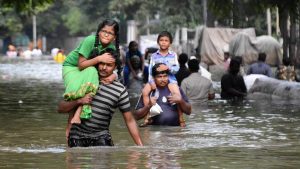 C limate Change is real, and it is that unpredictable component which when added to the already existing social, economic and political tensions, is latent to ignite violence and conflict with devastating consequences.

According to a new report of Environmental Justice Foundation (EJF), an NGO working for environmental causes and against human rights abuses, the number of people affected and migrating due to any environmental crisis will be more than the ones who have fled the Syrian conflict, bringing greater challenges to Europe. The frequently occurring environmental disasters will lead to create the biggest refugee crisis that the world has ever seen.

The report by EJF argues that climate change has played a part in building up the refugee population in the Syrian war. The successive droughts have caused 1.5 million people to migrate to the country’s cities between 2006 and 2011 and many of these people lack access to essential needs like food, water and jobs.

“In this frequently changing world, climate change, and its potential to trigger both – violent conflicts and mass migration – needs to be considered as an urgent priority for policy makers, business leaders and the world.”

It is not only the Middle East and African regions that will be affected by the changes. The changing weather conditions, like the recent hurricanes that devastated several parts of the United States, prove that the richer nations are not immune either.

The Executive Director of EJF, Steve Trent says that although climate change has undoubtedly posed an “existential threat to the world”, it is not too late to take decisive action.

“By taking strong ambitious steps now to phase out greenhouse gas emissions and building an international legal mechanism to protect climate refugees we will protect the poorest and most vulnerable in our global society, build resilience, reap massive economic benefits and build a safe and secure future for our planet. Climate change will not wait, neither can we, for climate refugees, tomorrow is too late”, says Trent.

A retired US military brigadier general, Stephen Cheney told ‘The Guardian’ that in approximately 20 years, the climate change taking place at this pace will drive people out of Africa, and a huge population of about 10 to 20 million people will be crossing the Mediterranean looking for asylum all over Europe.

These people who flee their lands in search for asylum due to any climatic disorders are called the environmental migrants and are not recognised as ‘refugees’. These migrants are not covered under the 1951 Geneva Convention which relates to the status of refugees, and is designed to protect those fleeing persecution, war or violence.

All the UN agencies that are involved in the refugee rights, UN refugee Agency; United Nations High Commissioner for refugees and UN Development Programme, agree that the term ‘climate/environmental refugees should not be used to describe those displaced for environmental reasons as it is not included in the definition of refugees in the 1951 Convention. The convention does not exactly include every displaced person on the Earth. For example, it does not include the population displaced within a country’s borders, and the population that will be displaced due to environmental changes/disasters will be majorly displaced within a country’s borders. Another reason for not recognising such population as refugees is that displacement caused due to environmental reasons is gradual, and not sudden like a refugee ‘flight’.

The definition and typologies of environmental migrants vary as widely as the number of such flows. There is no proper definition found in the official documents as this population is not legally recognised. Yet, some of the recent definitions given by, Myers and Kent (1995,18) have described ‘environmental refugees’ as “Persons, who no longer gain a secure livelihood in their traditional homelands because of what are primarily environmental factors of unusual scope. The term was first popularised by Lester Brown of the World Watch Institute in 1970s but many academicians accredit the term to a 1985 United Nations Report ‘Essam- EI- Hinnawi’.

In a paper named ‘Environmental refugees: a myth or reality?’, Richard Black from the University of Sussex, says that the notion that environmental degradation is increasingly at the root of conflicts that lead to refugee movements, has become the major theme of the literature on ‘conflict studies, as East-West rivalry is no longer a convenient explanation of war and other explanations behind forced migration.

“In layman terms, ‘people who have to flee their homelands due to sudden or gradual alterations in their natural environment, like rising sea levels, extreme weather events, drought and water scarcity, are called environmental migrants’.”

Not having a proper definition has complicated things further as there is no clear definition with which to designate a person as a climate refugee, nor is there any consensus that these ‘refugees’ are refugees at all.

Another perspective to this concept of calling these migrants, ‘refugees’ or not, is whether the affected people want the tag or not as the former President of the Central Pacific nation of Kiribati, Anote Tag, resisted the label, saying that his people wish to ‘migrate with dignity’.

The gradual changes in the surrounding environment caused due to rising sea levels, desertification and droughts resulted in complex patterns of movement, and hence their victims resist easy classification.

“Addressing the changes in the earth’s climate is not simply about saving the polar bears and preserving the beauty of mountain glaciers. Climate change is a threat to our national security,” notes Lee F. Gunn. Ret. Vice Admiral, United States Department of Navy.

“According to the reports of UNHCR, an estimated one person every second has been displaced by a disaster, with an average of 22.5 million people displaced by climate-or weather related events since 2008.”

Some cases of environmental disasters like the droughts in Somalia, in 2011 and 2012, floods in Pakistan between 2010 and 2012 and the earthquake in Nepal in 2015, can leave huge numbers of people traumatised without shelter, clean water and basic supplies.

The UNHCR states that many, who are displaced as a result of climate change, may not meet the refugee definition. Nevertheless, they are in need of protection and assistance. Therefore, UNHCR is supporting the platform on Disaster Displacement. The UN organisation has also developed ‘planned relocation guidance’ to move people out of disasters while respecting their human rights.

Despite the vague definitions and other legal loopholes, New Zealand is all set to become the first country to recognise the impact of climate change on the grounds for a claim of asylum. It is time that other countries also understand the need for action at the earliest.

The writer is doing post graduation in human rights, humanitarian and refugee laws from Indian Society of International Law. She can be reached on twitter @Anushka_6

Into the Clouds of the Upper Himalayas