Even as Thalassemics strive for the government’s support, as it finds no cure, The Thalassemia Prevention Bill, 2018, a Private Member Bill by Dr. Dharam Vira Gandhi MP, is said to make prenatal testing a legal mandate which can help prevent and eradicate the disease.

rowing up to be an all-rounder in academics and extra-curricular activities, 21-year-old Karan Dhiman is like any other college-going boy. Having completed his graduation, he dreamt of going abroad for higher studies. But his visa was rejected. Not because he is not qualified for it. But because he has a life-long condition called Thalassemia major, which the insurance companies do not provide cover for even after Thalessemia was recognised as a disability in the Rights of Persons With Disabilities Act, 2016.

“Every student should have the right to study. I had applied to four universities including in New Zealand but I was denied because I suffer from Thalassemia which does not have an insurance cover. Rather than looking for help from other countries and governments, I would have the support from my own government and country,” Dhiman, who is currently a Masters student in finance, tells Delhi Post.

A qualified counseling psychologist, MBA degree holder, a counsellor and Public Relation Officer are few of the many facets of 41-year-old Sangeeta H Wadhwa. But even after several achievements, “at the end of the day, a Thalassemic faces personal, professional and financial difficulties and disadvantages”.

“I am qualified enough to do anything I want but because of Thalassemia, I have to struggle for even my basic rights,” Wadhwa, who is founder of Youth Thalassemia Alliance (YTA), a NGO, tells Delhi Post.

And several others have such experiences to share where they deal with situations, hardships and the struggles on a daily basis such that it has become a part of their lives along with blood transfusions, expensive medicines and equipments. 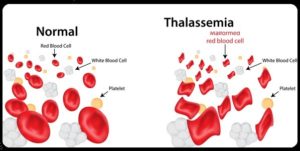 As a genetic blood disorder, Thalassemia manifests in the first year or two of birth, in which a patient’s body cannot produce the requisite red blood cells (RBCs) and the Thalassemic major requires to be supplemented with RBCs transfusions at least twice a month, throughout life. There is no cure available currently except Bone Marrow Transplant that depends on a matching sibling donor and costs a huge amount of money.

Lack of insurance cover, need for free medical care, availability of infrastructural services at subsidised costs, lack of awareness regarding Thalassemia are some of the pertinent issues faced by patients and their parents or caregivers. For instance, prolonged blood transfusions can lead to complications and risk of infections like HIV, Hepatitis C among others. For reducing the risk of such Transfusion Transmitted Infections (TTIs), Nucleic Acid Testing (NAT) is available as a molecular technique for screening blood donations as an additional safety measure but it is highly technical, involves huge costs, infrastructure, medical equipments and facilities, and is simply out of reach for most patients.

Added to it, is the basic ignorance when it comes to prevention of Thalassemia considering that in India, about 10-12 thousand Thalassemia major children are born every year and there are about two lakh such children who are continuing to undergo blood transfusions and related treatments. Reportedly, up to two lakh per annum is the cost for treatment of a Thalassemia major child. Highlighting such issues, Delhi Post has also started #ZeroThalassemia 2022 campaign for prevention and elimination of the disease.

“In order to promote awareness and to prevent the incidence of Thalassemia in new-born children, “with a view to avoid life-long suffering and hardship, and matters connected or incidental thereto”, The Thalassemia Prevention Bill, 2018 is going to be presented today.”

As a Private Member’s Bill in the Parliament by Lok Sabha MP from Patiala, Dr Dharam Vira Gandhi, The Bill calls for prenatal diagnosis where the role of the gynaecologist would be made essential. Dr Gandhi, a cardiologist himself, tells Delhi Post, “We are living in the 21st century and in a free country. Our aim is to help prevent this torturous disease and eradicate it. We have consulted many haematologists, pathologists and activists and the Bill has been declared as a sound, legislative framework Bill.”

The Bill specifies that if a woman is found to be a carrier or trait, which is asymptomatic or without showing any symptoms, then her husband should also be tested. If both are Thalassemia trait, ‘the couple stands a risk of carrying a Thalassemia major foetus.’ Reportedly, there is one in four (25 per cent) chance that the foetus could be Thalassemia major. In which case, just like advanced countries, the practice should be to offer them genetic counseling and advise for medical termination of pregnancy which can save the child as well as the parents from life-long discomfort.

“Thalassemia is totally preventable. It is good if it can be prevented through a prenatal testing that roughly costs a few thousands of rupees. It can save the child as well as the parents from the discomfort, morbidity and disappointment that the life-long treatment can have.”

To make this a reality, affirmative action is required at the highest level and that is why this Bill is being presented, asserts Dr Gandhi. Countries like Sri Lanka and Pakistan have brought regulations for prevention and awareness of the disease, so why not India, questions Shobha Tuli, Founder of Thalassemics India, which is acclaimed to be the first NGO in India that was established to fight against Thalassemia. Tuli recollects that it is her Thalassemic major, 18-year-old daughter’s last wish that gives her the strength to work for them. “It is important to educate, empower and provide for the patients and their families. It is equally important to help prevent it as the money spent on awareness and prevention is far less than the treatment. Though there is a long way to go, this can be a momentous step,” Tuli tells Delhi Post.

“It is time that people understand that we are not dependent on an external device like a stick, we are dependent on blood. That makes a whole lot of difference,” concludes Wadhwa.

Rising number of environmental refugees in the world