Sanitation and Mortuary Workers: How COVID-19 Adds to Existing Vulnerabilities?

While India is progressing as a country it fails to look after the workers, who play a vital role in ensuring that the ‘Swachh Bharat’ lives up to its slogan.

Sanitation workers in India face multiple marginalisation and vulnerabilities. This is because these workers have to face both biases—caste as well as biases against sanitation work. At a time 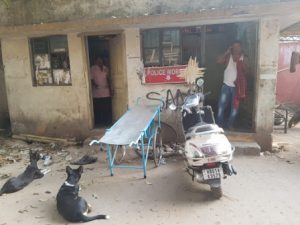 when the threat of COVID has affected the whole world, the vulnerability of the sanitation workers has increased as they have to work in the hospitals dedicated to COVID patients without even basic protective equipment. Due to the nature of their work they anyhow have to fight unknown viruses and now they are fighting with a virus that has a name—multifold vulnerabilities. Sanitation workers are living in poor conditions with little or no access to clean drinking water, or even a proper atmosphere around their houses.

Praxis along with Partners-in-Change and Jan Swasthya Abhiyan took an initiative to bring together both sanitation workers and activists who have been working hand in hand with these workers to give voice to the daily challenges of sanitation workers. Grim realities came to light when Ramesh (name changed), a contractual worker at government hospital shared his story.  Having worked for seven years as sanitation worker in the same hospital, the facilities or benefits that was provided to him was almost negligible. Even the salaries, which were a meager Rs 3000 to Rs 4000 per month for an eight-hour tiring duty, were not paid on time and sometimes were not given for months in a stretch. His role varied from changing the diapers of the patients to cleaning rooms and shifting patients from one room to another, as there was no distinction between any roles. “We are doing more work than others, but still we don’t get any support from the government. We work here whole day and go back to our family putting them at risk. Some of my colleagues tested positive but nobody cares”, said Ramesh.

Similar was the case with Sumitra (name changed), another contractual sanitation worker in Tamil Nadu, who further added that even after working for 15 to 20 years, there was no scope to become a permanent employee whose initial salary was Rs 15,000 per month. It was because more than experience, it required them to pay a heavy amount as bribe. “We have been accommodated in a storage room, filled with un-required materials, and that is where we have been eating and resting regularly, not even a separate toilet is provided”, she said. “Sanitation workers are protecting the people and they should be recognised for their hard work”, she added. Mahesh (name changed), a 57-year old permanent mortuary worker in a government hospital shared that as compared to the sanitation workers, mortuary workers condition was worse as they were not provided with any protective gears so that they can disinfect themselves after handling the dead bodies. Apart from that, he highlighted people from a particular caste were given mortuary work as if these castes were designated to assist postmortem and sanitation of dead bodies.

Be it government hospital sanitation workers or road sweepers under municipal corporations, the condition of everyone turned out to be the same. Rekha, a contractual road sweeper with Brihan Mumbai Municipal Corporation (BMMC) for the past 12 years shared the occupation hazards she had to face on a daily basis.

They had to pick with their bare hands the carcasses of dead animals and birds along with the discarded masks and other garbage on the road.

As a safety measure, they were given a pair of masks and gloves initially, but then that facility was also stopped. Apart from just a pair of masks and gloves they were not given any other protective gear and were expected to work as they did in ‘normal’ conditions. Even though they worked under the municipal corporation, they were also not provided with any sanitation facilities on the road—no toilets or spaces for hygienic washing. For women staff during their menstruation cycle, maintaining hygiene became most difficult.

Even though thegovernment announced sanitation workers as ‘Corona Warriors’ and budgeted a compensation of Rs 25 lakh for them, as per Vijay, a 40-year old ward boy in a government hospital in Ahmedabad said “If one is risking his life, at least families need to have an assurance of a job.”

Md. Gulab Rabbani, a Medical lab Technologist in GTB hospital, Delhi and General Secretary – Delhi State Contractual Employees Association, also supported Vijay’s views. He further informed that the services of contract workers in Delhi and across India were determined by the Contract Labor (Regulation and Abolition) Act 1970. “People often confuse the outsource system and contract system. As per the outsource system the minimum wage is paid via an agency. In the contractual system he gets salary in the same way a regular employee gets. In the outsourcing system, the rights of the employees are greatly ignored”, he said. Although as per the government records if the worker is meant to get a salary of Rs 14000, the contractor actually gives them only Rs 8000–10,000. 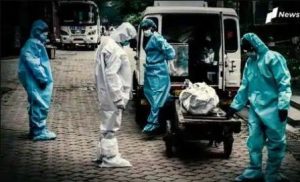 In Delhi, after a complaint was made to the senior officers, then an order was given that the salary will go directly to the employee’s account. Md. Gulab further shared that even at the time of COVID-19 when the other employee got quarantined after 14 days of duty, these employees were not been allowed the same. The situation was worse for women employees as they were forced to do all the work according to the contractor’s wishes.If they did not compromise, their jobs were threatened. “Contractual employee and outsourcing are like modern slavery. The time has come that we get together and fight against this. If this 70 per cent of contractual employees come together, we can take it to a higher level”, he asserted.

The discrimination against the contractual sanitation workers are rooted to such an extent that even a union leader has no information about his own accounts, let alone guiding his fellow colleagues on the same. Dadarao Patekar, vice-president and a member of Kachra Vahatuk Shramik Sanghathan, Mumbai and a contractual sanitation worker at Brihanmumbai Municipal Corporation (BMC) shared that the government of Maharashtra did declared a daily wage of Rs 180 for the contractual workers,but the contractors and middlemen paid them only one-third of the rate. “PF is usually 12 per cent and some amount for ESI, but they use their discretion to cut wages and claim it is for these benefits. We don’t even have access to ESI hospitals”, he said.

Paroshottam Vaghela associated with SC Safai Karamchari, Gujarat, echoed the views of all the panelists when he said, “These workers work for the good health of others, but themselves they live a life filled with dangerous conditions.

They clean the roads, drains, hospitals, but their own lives are very tough.” 175 workers died in 2014-15 due to various illnesses because of their job.It was a pity that due to the COVID threat when all the medical staff was working overtime, the doctors, nurses and paramedicalin the civil hospital got hotels to stay along with food, but the sanitation workers got nothing even though they were the ones that did post-mortems for all those who died of COVID-19.

Dr Sylvia Karpagam, a public health doctor and researcher, shared that unfortunately the contractual employment, especially in the field of sanitation, is so caste-based, that each and every right is violated. There are issues of sexual abuse and harassment. It has become a negative cycle where health system doesn’t accommodate the workers. There have also been instances of deaths of people into manual scavenging which is recorded by the police and the hospital as accident and not something caused due to workspace related negligence. “There is something that is hazardous work defined by labour laws. Hazardous work is one that puts people at risk in terms of their life and their health by exposing them to physical, chemical or biological hazards. There are clear guidelines that if they are hazardous occupations then there are clear need for extra protection, extra risk-cover, extra training, more protective equipment, health insurance, better salaries, guaranteed jobs for their families, education for their children, housing. All these are well-established in any developing society”, De Sylvia said. There is a need to move on to tangible actions and ensuring the legal and constitutional rights of the workers. In April this year a petition was signed by several people for the same, wherein one of the demands was that sanitation work should be mechanised, contractual and regularised with wages up to Rs 20000, health insurance, work benefits, pensions, housing and preferable admission into Kendriya Vidyalayas.