Establishment of a transitional justice mechanism addressing the grievances of migrant workers is a need of the hour, without which the process of ‘Building Back Better’ cannot be accomplished.

Migrant workers are no strangers to injustice. They were vulnerable in the pre-COVID world, but the pandemic has exacerbated their vulnerabilities to the extent that if no 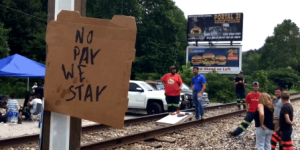 remedial mechanisms are adopted now, grave and incorrigible wrongs shall be committed to a community, which has contributed immensely to the development of both their origin and destination countries. Exploitation of migrant workers, especially the low and medium skilled labourers, through various means likedenying access to legitimate or minimum wages, subjecting them to unsafe working and inhuman living conditions and threatening dismissal or deportation on demanding their rights, were prevalent prior to pandemic. However, COVID-19 expanded and deepened the sphere of exploitation making it more visible than ever. Restrictions to mobility, global economic downturn and job losses in the wake of pandemic hit the migrant community most severely, as many not only lost their jobs, but also the legitimate wages, compensations and benefits they had their claims on. What is being done to address this heist, which has further pushed the migrant workers towards the margins? Or more importantly, what can be done to bring them back from the fringes and ensure justice?

How has COVID-19 Aggravated Wage Theft?

Institutions like International Labour Organization (ILO), Human Rights Watch (HRW) as well as various migrant forums across the world have released several reports highlighting how workers are exploited at each stage of migration, from deception during recruitment, inadequate pay and miserable housing conditions, to even physical abuse and violence. They were particularly vulnerable to wage theft since the employers often took advantage of reluctance of migrants to report the violations of their rights due to fear of job loss and deportation.Efforts were made to address this flout violation of established international norms. The adoption of Global Compact for Safe, Orderly and Regular Migration—the first inter governmentally negotiated UN agreement aimed at facilitating the coordination of all stakeholders in transforming global migration regime to more fair, equitable and rights based system–in 2018, came in as light at the end of the tunnel. However, COVID-19 and the responses that followed have not only stalled the progress made so far, but also aggravated the crisis.

While the pandemic continues to present a major health catastrophe, it has also rocked the foundations of the globalised world with porous borders. Response strategies to COVID-19 included border closures and imposition of lockdowns. The economic recession that followed was unprecedented, with the dip in oil prices further fanning the flames.

This has led to job losses, with the ILO reporting the global labour income to be reduced by 10.7 percent within the first three quarters of 2020 compared with same period in 2019.

The migrant workers, who comprise nearly 4.7 percent of the global labour force, were the hardest hit due to the impact of pandemic. They were the first victims of retrenchments and were stranded in host countries without access to social protection schemes, since in many host countries like the GCC states, the loss of job also translatedto theloss of residence permits. Soon the repatriation mechanisms kicked in, with India alone repatriating 2,20,000 migrants, mostly from the Gulf countries. While the governments have been grappling with the dual issues of economic slowdown on one hand and responsibility to reintegrate these returned migrants while dealing with paucity of remittances on the other, a vital issue that got sidelined is that of the wage thefts incurred by the migrants.

Dealing with the Wage Theft

In his recent article, migrant rights defender and independent journalist Rejimon Kuttappan highlighted with the aid of personal testimonies, how migrant workers working in the Gulf countries are returning homes devoid of months of salariesand are falling into poverty and debts. While no data have been made available yet on the exact amount of wages lost collectively due to wage theft, it is no longera suspicion that migrant workers have been denied their dues during the job losses and hurried repatriation process in the wake of pandemic. Migrants have been cheated out of their wages at a time when they can least afford it, pushing their lives and of those dependent on them, to the edges of precarity. This calls for the establishment of a transitional justice mechanism that can address not only the wage theft and outstanding claims that manifolded during the pandemic, but also ensures compensation to the migrant workers, who at the receiving end of unjust treatment. The response can be formulated at different levels.

On an international level, multilateral institutions like ILO and IOM, can urge the governments of origin and destination countries to establish mechanisms to address the wage theft during the pandemic. They can also play an important role in facilitating this coordination by providing platforms for dialogue and aid in the formulation of the policies and procedures necessary to bring this to fruition. International Claims Commission can be set up under the mandates of UN to shift the responsibility from country specific judicial systems, mitigate conflicts of interests between origin and destination countries and ensure faster resolution of claims. Addressing the grievances related to wage theft shall be a solid leap towards fulfilling the GCM Objectives.

The most impactful decisions are to be made by the governments of the source and host countries. We have already 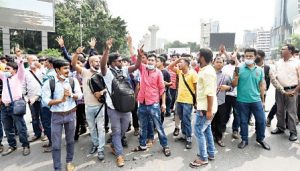 witnessed certain steps taken towards this direction. The government of Qatar has introduced various reforms to the Wage Protection Scheme, becoming the second GCC country after Kuwait to establish national minimum wage andcreating norms to prevent wage deduction and violation of contracts. The website managed by the Public Authority of Man Power, Kuwait has created provisions for migrant workers to register their grievances. Abu Dhabi mobile court has settled 53,000 workers dues worth Dhs577 million by the end of July 2020, the Philippine Overseas Employment Administration (POEA) has restarted its online legal assistance program to help overseas Filipino workers (OFWs) and their families to file illegal recruitment cases, and wage theft got criminalised in Queensland, Australia following the passage of Criminal Code and Other Legislation (Wage Theft) Amendment Bill 2020, to name a few similar measures. In India, the High Court of Kerala, the state which had 2-2.5 million migrants working in Gulf countries prior to the pandemic, has called for setting up of a grievance redressal mechanism for Indian migrant workers abroad.

The High Court instructed the migrant workers to make use of redressal platforms and forums provided by the government like Ministry of External Affairs AD portal and Central Public Grievance Redress and Monitoring System portal.

There is a need for cooperation between source and destination countries in addressing issueslike wage theft.  Legal aid must be made accessible at the ground level for the redressal of the grievances of migrant workers and policies must be translated into actions.

The Call for an Urgent Justice Mechanism for Repatriated Migrant Workers, launched by a large coalition of civil society organizations and trade unions on 1 June 2020, urging the States to “to fast track the dispensation of justice in cases of wage theft to prevent migrant workers from falling into a vicious cycle of debt, poverty and despair, and work towards long-term solutions to the common practice of wage theft against migrant workers”, is a prime example of therole played by CSOs in making things happen. In addition to this, they can also play an important role in channeling the flow of information, increasing awareness amongst the migrant community, organizing them and shaping the narrative in favor of migrant workers.

During the instances of wage theft, migrants end up not only losing the investments they make while obtaining their jobs, but also lose their rights to decent income and livelihood. Establishment of a transitional justice mechanism addressing the grievances of migrant workers is a need of the hour, without which the process of ‘Building Back Better’ cannot be accomplished.