Science-rich cinema strengthens society and is an effective tool to empower the nation, said Dr 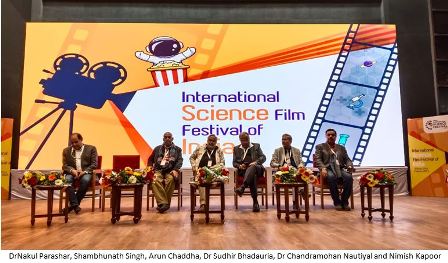 A renowned scientist, Dr Nautiyal, delivered his keynote address on “Films to Reflect India’s Emergence as Science & Technology Leader” in the special context of Science-20 (S-20), one of the working groups of G-20 being presided over by India in 2023. It was addressed to a gathering of science filmmakers, and science film enthusiasts assembled at Rajat Jayanti Auditorium, Pt. Khushilal Sharma Ayurveda Institute, Bhopal, Madhya Pradesh.

The theme of the S-20 for 2023 is ‘Disruptive Science for Innovative and Sustainable Development.’ For the past several years, the group of G20 countries has been working towards addressing other global challenges, such as climate change mitigation and sustainable development. Several working groups have been established, including S-20, to achieve these goals.

Stating the resilience of India during the COVID-19 pandemic, Dr CM Nautiyal highlighted the strength of science and technology and their crucial role in educating people about the disease. He also stated the importance emergence of G-20 and S-20 initiatives and how these have helped in sustainable development.

As S-20 stands for Cooperation in Science, the benefits of science and its various fields can easily be incorporated into improving human values and civilization. Engagement of scientists and researchers in the S-20 programmes through communication is much needed to make any nation a superpower. These developmental programmes are backhanded by multiple communication channels, and one of the efficient mediums is film and cinema, said Dr Nautiyal.

As the masses can easily understand film and cinema, they can also be used to portray science and its different aspects and roles in human civilization. This can be done by targeting niche audiences like students and youth who have been perceiving science as creativity and innovation. In India, around 4000 science-based films have already been produced and made available to the audience by VIGYAN PRASAR. Some other institutions like DD, NCSTC (DST) and some private channels are the main players in the science film-making world, said DR Nautiyal.

Dr Nautiyal said that western cinema, already rich in science-fiction, has produced movies like JURASSIC PARK, INTERSTELLAR, GRAVITY, and STAR WARS and created a different world for its viewers. Movies like Mr. X IN Bombay, Koi Mil Gaya, Krrish, and Drona have represented Indian Cinema in the science-fiction league. Science and technology, on the whole, control a nation’s destinies and eventually help shape industrialization and technological emergence.

Nimish Kapoor, Coordinator, ISFFI-2022, said, “Film entries were invited in four categories related to science, technology, and research & development. Out of 437 entries received, 61 Indian and 33 foreign films have been nominated for the festival. Special screening of award-winning science films from India, Switzerland, Germany, Russia, Canada, Israel, Philippines, USA, Australia and other countries will be done at the film festival. There is no participation fee for the film festival. People of all age groups, including children and students, can come and watch the science films from 21 to 23 January 2023.”

A film – ‘Return of Cheetah’ was screened during the inaugural session of the film festival. Creative Channel and the Ministry of Forest and Climate Change have produced this 2.27-minute film. The short film beautifully depicts how the return of cheetahs to India is a step towards correcting the man-made ecological fault. Introduction to Namibian Cheetahs Coming to India is a historical event because a large carnivorous animal never migrated from one continent to another. (India Science Wire)