Stigmatisation and international laws that tilt towards prohibition of drugs make it difficult to find a common ground for a rational debate.

D ating back to the latter part of 1800s, precisely in 1894-95, the Indian Hemp Drugs Commission consisting of medical experts of Indian and British origin concluded that moderate use of cannabis was the rule in India, and produced practically no ill-effects. The Commission had convened not because of any major concerns in India itself, but because of questions raised in the British House of Commons claiming that the lunatic asylums of India were filled with cannabis smokers. The Commission found no evidence that cannabis produced serious mental disorders and advocated control and restriction through taxation and regulation, aimed at suppressing the excessive use and restraining the moderate use within due limits.

“What countries like Uruguay and Canada are doing now, India had already proposed 120 years ago,” says Tom Blickman from the Transnational Institute (TNI), an international policy think tank based in the Netherlands. “Had the wisdom of the Indian Hemp Drugs Commission’s recommendations prevailed, we would have prevented a lot of misery by erroneous drug control policies,” he points out.

However, in 1961, India became a signatory to international legislation in the form of United Nations Single Convention on Narcotics Drug which refers to drug addiction as a “serious evil”. And in 1985, cannabis prohibition became entrenched in Indian law with the introduction of the Narcotics Drugs and Psychotropic Substances Act which made the possession of drugs, including cannabis, a punishable offence, when the 25-year transitional period for traditional producer countries, that had been introduced in the 1961 Convention due to the insistence of India amongst others, came to a close.

“So what happened between the Hemp Commission report when India wanted to tax and regulate and the period in which it went on to adopt the policies of the Western countries, of the former colonisers and under pressure from the United States and the UN? We were surprised to see that India, in a process of self-colonisation, adopted policies that did not really fit the cultures and realities of India,” opines Tom Blickman in an interview to Delhi Post, on his recent visit to India, while referring to a TNI report published in March 2014 titled The Rise and Decline of Cannabis Prohibition, authored by him, his colleague Martin Jelsma and Professor DaveBewley-Taylor of Swansea University in the United Kingdom.

“India did succeed in limiting the definition of cannabis to the flowering tops of the plant, and in doing so excluded the traditional use of bhang from a ban by the UN drug control conventions,” Blickman says. “Discussion is pertinent as to why there has been a policy of prohibiting cannabis when it wasn’t much of a problem a century and more ago, especially in the Indian context,” he says. “Maybe it is time for a new kind of independent Commission that looks into the issue of cannabis again and evaluates the impact of the current prohibitive legislation in India.”

TNI’s Drugs and Democracy Programme analyses drug policies, examines underlying causes of drug production and consumption and researches trends in the illicit drugs market. It seeks to initiate dialogue and a drug policy reform based on principles of human rights and harm reduction. Currently, TNI focuses on the possibilities within international law to allow for the regulation of cannabis. Under the current international drug control regime, regulating cannabis markets for non-medical use will mean that countries doing so are no longer in compliance with the obligation under the treaties to restrict cannabis to “medical and scientific” purposes.

Describing his recent visit to the Indian state of Uttarakhand, he says that “not much had changed” since the days of the Indian Hemp Commission when it came to the traditional uses of cannabis plant for oil, fibre and nutritional supplements but, “What has in fact, changed is that the laws have changed and people have become cautious to avoid being harassed by the police officials”.

Uttarakhand is the first Indian state to make cannabis cultivation legal as it faces issues with conventional crops because of topology, acute water shortage and problem of destruction of crops by wild animals. As a high-value crop, hemp can be harvested in three months and requires less water. But stigma attached to the crop is overwhelming, isn’t it? “Stigmatisation of the plant and most of its uses are problems. India can learn from the approach taken 120 years ago. It can regulate tax and have a system in place for people who develop problematic use. Those are better solutions than throwing the growers and users in jail as a blanket measure which causes a lot of harm. The point is to develop a policy where it is not freely available, but for people who want to access it, cannabis should be available and they should have good information about the benefits, risks and harms,” Blickman, tells Delhi Post. 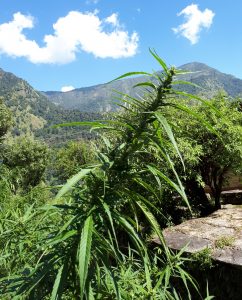 He further adds that “regulation helps to get rid of the criminality that surrounds an illegal market”. An obstacle to reform is the current stigmatisation of the plant as an evil. “Prior to my trip to India, I was reading about cannabis in India and was astonished to find how stigmatised the plant is by the Indian media. Users are addicts by definition. That is simply not true. Not everyone who smokes cannabis becomes an addict. The problem is moral judgements are passed every time rather than evidence-based arguments. Drug use is not a disease, nor should it be a crime, as more and more countries are starting to realise. The people that develop problematic use need to be helped, the others should be left alone,” says Blickman, who has been with TNI for over 20 years.

Off late, there have been voices for medical cannabis with parliamentarians like Shashi Tharoor extensively writing and recommending cannabis research and legalisation of cannabis and even a Private Members’ Bill to regulate plant-based drugs like cannabis and opium was moved by Lok Sabha MP from Patiala Dr. Dharamvira Gandhi in the Parliament in 2017. “The bill is interesting as it would allow opium to be used in the treatment of problematic heroin and synthetic opioid users,” Blickman says. “Here the traditional use of opium could meet modern evidence-based harm reduction policies of heroin substitution or heroin-assisted treatment but with the original natural product.” India produces opium which would make it an inexpensive measure to try to tackle the problems with heroin and synthetic opiods in the Punjab for instance. “India used to have a legal registration system for opium users and this could be restored,” he added.

“In the past five years or so, specifically talking about the recreational use of cannabis, some countries are considering a regulation. But they are bound by international law; treaties of the UN that do not allow any use other than for medical and scientific purposes. International law is an important aspect of a peaceful governing of the world and should not be taken lightly. We try to find solutions within the boundaries of international law,” says Blickman.

“An inter se agreement on cannabis regulation, as outlined in our recent report Balancing Treaty Stability and Change: Inter se modification of the UN drug control conventions to facilitate cannabis regulation, would allow a group of countries to modify certain drug control treaty provisions regarding cannabis amongst themselves alone. The option of inter se modification, based on Article 41 of the Vienna Convention on the Law of Treaties, was specifically designed to find a balance between the stability of treaty regimes and the necessity of change in absence of consensus as is the case at the moment. Inter se modification appears to provide a useful safety valve for the state of paralysis of the global drug control regime today,” he mentions.

Yet, establishing a common ground for rational debate has not been established? “What we do is to organise informal drug policy dialogues with academics, civil society organisations, government representatives to try to find a common basis for reform and more humane policies. But it is difficult. Drugs are often seen as a moral issue. Stigmatisation and international laws that tilt towards prohibition make it difficult to find a common ground for a rational debate. Still, these kinds of dialogues are useful to analyse what works and what doesn’t,” Blickman points out, adding that “political will and courage to go against the ones favouring prohibitionist policies is needed. That will involve debate which will be useful for users, growers, scientists and academics to see what the problems are with the current policies”.

He also says that traditional producer countries like India and Morocco have yet to recognise the potential of a cannabis economy. In Canada, where medicinal marijuana is legal, cannabis sale accounts for as much as 0.2 per cent of the GDP. In the US, where cannabis is legal in some states, there is an $8 billion cannabis economy. “In Canada and the US, a multi-billion dollar industry is developing around cannabis. What we fear is that these private companies will dominate the market and traditional farmers in Morocco and India among others will be left out. We think that is unfair. These people have supplied the illegal market for decades to make ends meet. These are the ones who basically suffer the negative consequences of prohibition and don’t make the big money. We want to include them to have them legally produce in a regulated cannabis market,” Blickman tells Delhi Post.

Tracking disability is the need of the hour