Tracking disability is the need of the hour

Accessibility, availability and affordability to various government schemes and opportunities for People with Disabilities still remains a far-fetched goal, indicates a study by a development organisation.

O nly 26 per cent of People with Disabilities (PwDs) in the working age group have access to some form of work. In comparison to men, participation of women is lower and 81 per cent of PwDs have bank accounts to access monthly social security pensions through direct bank transfers are some of the findings by a study titled ‘SDG Disability Tracker – Nothing About Us Without Us, 2018’.

The report brought out by a development organisation, VSO that promotes volunteering for development to support the marginalised, reveals that though the government’s efforts to reach out to PwDs shows “positive trends in the area of medical certificates” with 63 per cent, only 54 per cent accessed any social assistance programme.

“With an estimation of about 15 per cent of the world’s population having some form of disability according to World Health Organisation, PwDs are often considered the most marginalised groups in the world.”

Even the Rights of Persons with Disabilities (RPWD) Act passed in December 2016 in India which amended the definition of disability to include 21 disabilities from the previous number of seven in the 1995 Act, talks about accessibility with a two-year deadline for the government and private sectors to ensure that persons with disabilities get barrier-free access to physical infrastructure and transport systems.

“Issues of exclusion and disability rights’ violations are often not monitored through development processes. Even in the Human Development Index (HDI), for instance, there is no framework or aspects related specifically to disabilities,” writes Praveen Kumar G, Advisor Social Inclusion, VSO, in the introduction of the 100-page report.

“The tracker report had 642 PwDs who participated from across 100 Gram Panchayats in Raipur, Chhattisgarh and Ranchi, Jharkhand as well as key stakeholders who reviewed the services and entitlements related to Sustainable Development Goals (SDGs) 1, 3 and 4 as part of a Citizen Led Monitoring (CLM) exercise to ensure social accountability.” 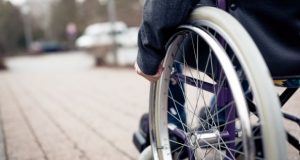 These Global Goals focussing on poverty, health and education are stated as ‘Ending poverty in all its forms everywhere’; ‘Ensuring healthy lives and promoting well-being for all at all ages’ and ‘Guaranteeing equal and accessible education by building inclusive learning environments and providing the needed assistance for PwDs’ respectively.

“SDGs are a big opportunity that we see which India is also aligned with. Within it, when we did this consultation way back in December 2016, we felt that there is a need to have a set of indicators which specifically looks at disability and accessibility to various services for disabled citizens. We also had follow-up consultations in May 2017 and August 2017 with various other experts from the disability sector and organisations,”Praveen Kumar G tells Delhi Post in an exclusive interview.

The disability tracker states that in terms of disabilities, while persons with mental illness recorded no form of engagement in productive work, only one person with mental retardation was engaged in unskilled labour in Raipur. The report also lists reasons cited by PwDs and their caregivers for high rate of non-working population which includes the nature of disability, illiteracy, lack of employable skills and difficulty in commuting to work.

“Giving an example of a mega placement drive that took place from January 8 to 11 in Ranchi for pass outs of state-run engineering colleges and technical institutes, quoting a disability rights’ activist, the report statesthat PwDs were not made a part of the drive initiated by the Department of Higher, Technical and Skill Development.”

Following the Census of India 2011 guidelines for identifying and categorising disabilities, a mixed methods approach was used with quantitative and qualitative tools such as interviews; village-wise listing of PwDs through consultations with and gathering information from ASHAs, Anganwadi workers, Auxiliary Nurse Midwives, Panchayati Raj Institutions (PRIs); case studies; facility assessment checklist of schools and health centres and semi-structured interviews.

The disability tracker calls for a disability aggregated data on not just the three goals but all the 17 Global Goals for an ‘inclusive and equitable development’ and emphasises on the need of policies and actions to reflect the diversity shown in the RPWD Act.However, the disability tracker states that awareness about the RPWD Act, which is still being translated into regional languages, needs to be generated along with stricter implementation at the state level so that all “governance structures can be re-oriented” from the national level to the last mile delivery in the village such as ASHAs, PRIs or Anganwadi workers.

However, access to assistive devices including aids and appliances shows a negative trend, as per the report which states that 52 per cent of the individuals who required them said they paid for the devices personally despite government’s scheme for free provision to economically weaker sections.

“Disability is a multi-dimensional phenomenon where environmental factors including the availability of family, community support, assistive devices and policies are essential along with reducing stigmas and stereotypes,” says Praveen Kumar G.

According to the study, only 20 per cent PwDs reported accessing primary healthcare as their requirements were not met. The study also indicates that the education system needs an overhaul considering that only 62 per cent of children with disabilities in the school-going age of 6-14 years were in schools only limited to the enrolment data;the tracker suggests that there is a need to strengthen preventive and curative healthcare services while ensuring inclusion in education and increasing the participation of PwDs in workplaces.