In a recent development, the semen and the fertility profiles of the cloned bulls have found to be normal in testing.

On 14, February 2003 when the first cloned variety of sheep, Dolly died there have been huge speculations about cloned varieties of animals. To take this challenge team 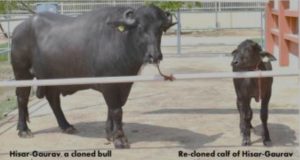 of scientists from the Central Institute for Research on Buffaloes (CIRB) have developed multiple clones of bulls under a project funded by the Indian Council of Agriculture Research (ICAR). These are of Murrah breed which is mostly known for its potential to produce a high quantity of milk. In a recent development, the semen and the fertility profiles of the cloned bulls have found to be normal in testing.

“We observed variations in some fresh semen parameters (ejaculated volume and mass motility), frozen-thawed sperm parameters (plasma membrane integrity, and computer-assisted semen analysis (CASA) indices), but values are within the normal expected range,” said Dr Dharmendra Kumar, Senior Scientist, Division of Animal Physiology and Reproduction, CIRB.  There was no difference in sperm concentration of ejaculated semen and frozen-thawed semen parameters which include sperm motility, percentage of live and normal morphology sperm, and distance traveled through oestrus mucus. “This study has encouraged us to take up the job further and this will help boost up the milk production in the country in near future” said Dr Kumar.

One of the keyproblems that limit the faster genetic improvement of buffaloes is the shortage of proven bulls to mitigate the demand of semen for breeding.

Buffalo cloning is an asexual means of reproduction that produces genetically identical copies of a desirable buffalo without natural or artificial mating and any genome modification. Buffalo cloning is one of the assisted reproductive techniques, in which one somatic cell is fused with enucleated oocyte/oocytes to produce blastocyst stage embryos. The produced blastocysts are transferred into the foster mothers to carry cloned pregnancies and to deliver cloned calves. The application of this technology to current buffalo breeding strategies will have a substantial impact on selection intensity and subsequent genetic gain. India’s first cloned buffalo was born on 6 February 2009, and thereafter several cloned buffaloes have been produced using different types of somatic cells.

Theatre Comes Alive in New Avatar During the Pandemic