Shooting of Foreign Films in India Get a Boost 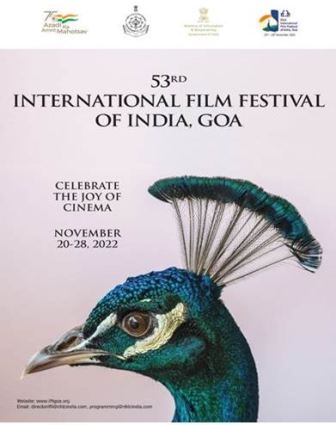 Talking about the aspects of the incentives, Shri Thakur informed that for official co-productions, international film production companies could claim a reimbursement of up to 30% on Qualifying Expenditure in India subject to a maximum of INR 2 crore. Foreign films shooting in India can claim an additional 5% bonus up to INR 50 lakhs (USD 65,000). Additional reimbursement would be granted for employing 15% or more workforce in India. The schemes will provide an impetus to global collaborations with India and attract investment from foreign filmmakers and help promote India as a filming destination, the Minister said.

Expounding the deep social roots of Indian cinema, Shri Anurag Thakur said that Creativity, excellence, and innovation in Indian cinema had developed hand in hand with acute treatment of subjects of social and national importance. “While reflecting the values, beliefs, and experiences of the Indian people, Indian cinema has also showcased their hopes, dreams and achievements. While rooted in Indian culture, the Indian film industry has grown to acquire a universal character. And while preserving our age-old stories, the Indian filmmakers are innovating in their art of storytelling through technology”, the Minister added. “Indian cinema is not only the story of a 6000-year-old civilisation, not only the story of 1.3 billion tales, but also the story of human talent, triumph and the trajectory of New India narrated through your lens”, the Minister remarked.

“Bharat ka cinema, daurna chahta hai, udna chahta hai, bass rukna nahi chahta”, paraphrasing a dialogue from the movie ‘Yeh Jawani Hai Diwaani’, Shri Thakur said that through the beautiful journey Indian cinema has inspired global filmmakers and also been inspired by them, and 2020s are the best time to make art and films in India, the Minister added.

Indian cinema is undergoing a paradigm shift. “Over the last few years, the streaming revolution has taken the country by storm, and the popularity of digital/ OTT platforms has changed how films are created, distributed and consumed. Consumers of global and Indian cinema have more choice than ever before”.

Speaking on the strong intent of the Government to make India a favourite filming destination, Shri Thakur said, “We have a strong intellectual property regime, and the digital medium now complements the other more established modes of consumption and dissemination such as theatres and movies. This has brought about a democratisation of consumer choice like never before, and our government intends to preserve this via support to the creative industries.”

Crediting India’s film restoration work for its scale, Shri Thakur said the Government has embarked on the world’s largest film restoration project under the National Film Heritage Mission. Two thousand two hundred movies across languages and genres will be restored to their former glory as part of this drive.

On congratulating the India Pavilion, Shri Thakur said, “India Pavilion is a feather in our cap. Only with your Vishwas and Prayas today will it become the pioneer of the Indian dream tomorrow.”

The Minister released the official poster for the 53rd edition of the International Film Festival of India at the India Pavilion.

Speaking on occasion, actor Ms Tamannaah Bhatia said that India has contributed to the global film industry. In the 75th year of independence, the partnering of the Cannes Film Festival with India is truly iconic. Actor Nawazuddin Siddiqui added to the sentiment by saying that India is a land of many stories and these stories from the grassroots are worthy of global prominence.

Actor Deepika Padukone commented that this was a proud moment that India was the country in the spotlight at Cannes on the 75th anniversary of independence, adding that Indian cinema is at the cusp of greatness, and this achievement at Cannes is only a beginning.

Shri Shekhar Kapur said India was a land of stories, and now Indian culture will become a predominant culture in cinema as the west plateaus. Shri Prasoon Joshi extolled that filmmaking needs to become so easy a process that budding filmmakers from the smallest towns feel empowered to turn their vision into reality.

Ms Pooja Hegde emphatically commented that she was there as part of none other but brand India. It was an honour; further, India was a Country of Honour, proof that India was making the right noise. Ms Vani Tripathi commented on the role Indian women played in cinema and said that Indian women are being celebrated today across the world, as Deepika has proven by being a jury member. Shri R. Madhavan, Shri A.R. Rahman, Ms Urvashi Rautela, Shri Mame Khan and Secretary of I&B, Shri Apurva Chandra, were also present.

Shri Jawed Ashraf, the Ambassador of India to France, read out the message from Prime Minister Narendra Modi for the Indian delegation to Cannes Film Festival. He further said that Indian cinema has made the world know India better by addressing the audience. The Indian cinema is a critical aspect of the expanding soft power of India in the world.

Ministry of Information and Broadcasting, Government of India, has decided to launch Incentive Schemes for International Productions that shoot in India and Official Co-productions with foreign countries.
The Incentive and eligibility

1. Under the Incentive Scheme for Audio Visual Co-production, for all qualifying projects, the Indian Co-producer can claim a payable cash reimbursement of up to 30% on Qualifying Expenditure in India subject to a maximum of INR 2 crore (USD 260,000). However, reimbursement shall be divided among the Producers as per their respective share of the financial contribution for the project.

2. Under the Incentive Scheme for Shooting of Foreign Films in India, the same incentive as mentioned above shall be provided. Apart from that, an additional 5% bonus up to a maximum of INR 50 lakhs (USD 65,000) can be claimed as additional reimbursement and would be granted for employing 15% or more manpower in India.

To avail of this scheme, International productions that have been granted shooting permission by the Ministry of Information & Broadcasting and Ministry of External Affairs (for documentaries only) after 01.04.2022 shall be eligible.

The Incentives will be disbursed in two-stage, i.e. Interim and Final. The final disbursement claim can be made once the project is complete in India. Incentives will be provided on the recommendation of a Special Incentive Evaluation Committee. (The detailed guidelines will be available on the FFO website). Moreover, incentives can be claimed under either of the Schemes and not for both.