India Smart Cities Awards Contest 2020 winner to be felicitated at Surat during the conference.

The Ministry of Housing and Urban Affairs (MoHUA), Government of India under the clarion call of 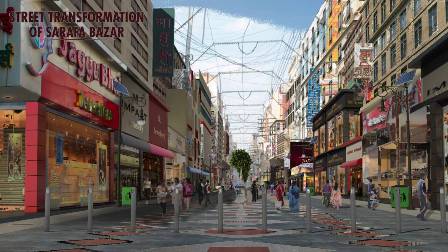 Azadi ka Amrit Mahotsav (AKAM) by the Hon’ble Prime Minister to commemorate the 75th anniversary of Independence, is organising “Smart Cities, Smart Urbanization” event from 18-20 April 2022 in Surat, Gujarat. Azadi Ka Amrit Mahotsav celebrations were inaugurated by the Hon’ble Prime Minister Shri Narendra Modi in March 2021 which marked a 75-week countdown to the 75th Anniversary of our independence in August 2022 and will continue a year thereafter.

The event will be attended by all key urban stakeholders from Central and State Governments, including inter alia, Officers of the Central Government, Principal Secretaries of States/UTs, Municipal Commissioners of Cities, MDs/CEOs of 100 Smart Cities,  State Level Nodal Agencies/ Mission Directorates, along with their officials and team members, professionals, industry representatives, global partners and experts, media, and members of academia. Activities displaying the ‘whole of government’ approach, people’s participation, our rich cultural heritage, innovations and future aspirations commemorating the 75th year of independence will be showcased during the event.

MoHUA will be felicitating the winning cities of the India Smart Cities Awards Contest (ISAC) 2020. Awards will also be given to the winners of some of the pre-event activities that were undertaken from 1st -31st January 2022 as a pre-cursor to this mega event being held in Surat, including inter alia Open Data Week, Urban Geospatial Data Stories Challenge, Placemaking Marathon, Freedom to Walk and Cycle, and ClimateSmart Cities Assessment Framework 2.0 winners (CSCAF).

Several key initiatives will be launched during the event vis. release of Urban Outcomes Framework 2022 including, ‘Ease of Living’, ‘Municipal Performance Index’, ‘Data Maturity Assessment Framework 3.0 and ClimateSmart Cities Assessment Framework 3.0. Ministry’s integrated data portal AMPLIFI, which will provide valuable data on Indian cities will also get launched. In addition, a comprehensive dashboard on Outcome Output Management Framework (OOMF dashboard in GMIS) with more than 7800 projects being measured for their contributions to urban life and Sustainable Development Goals, will also be released during the event.

A significant attraction at the event will be placemaking at the venue, which will replicate a model neighbourhood that cities can aspire for. Key learning from this model includes how a neighbourhood should be designed so as to be built more safely, is walkable and healthy, for all stakeholders including the elderly, children and their caregivers. In addition, several start-ups will showcase their innovative products at the venue.

The event will be a green event that will encourage all participants to opt for Green Transport and choose Electric vehicles over other options for commuting to the event venue. The conference venue will be plastic-free and participants will be encouraged to carry their own bottles to fill up with drinking water. Further, participants will be given the option to scan QR codes placed at different locations to read about the various Mission initiatives, instead of placing paper brochures and other reading material.

Thematic Pavilions at the Event:

The event will showcase various interactive activities, planned interactions with eminent speakers and learnings across the 5 themes for over 1000+ participants who have registered from across the country.

Detailed interactive events have been planned in the session to promote the development of the public realm in cities, smart neighbourhoods, placemaking, child and caregiver friendly neighbourhoods, pathways to net-zero carbon mobility,  and urban health.

In the Digital Governance Pavilion, interactive workshops and immersive sessions are being organized to showcase the benefits accepted from digital governance in cities. These are being demonstrated basis real-time data, AI/ML cases, and the use of platforms, such as India Urban Data Exchange (IUDX) and Integrated Command and Control Centre (ICCC). A live session of Surat ICCC will be showcased at the pavilion. The space will also be hosting a data game for stakeholders to understand the value of open data.

The Innovation Pavilion will host cutting edge solutions from leading startups in the urban tech sector, with interactive activities and sessions designed to aid in comprehension and awareness of programs, with a dash of gaming to make learning fun. The session will discuss/promote the usage of City Innovation eXchange (CIX) and the Smart Procure Guidelines, the Smart Cities Mission is pursuing the institutionalisation of innovation in smart cities.

The Smart Finance theme will focus on innovation in urban finance helping cities identify untapped sources of revenue. The section will showcase an exhibition of 20+ successful and innovative PPP projects of Smart Cities Mission, a section with MUNIFY (where ULBs can know their budgets and finance overviews), Invest India Grid section, National Infrastructure Pipeline (NIP), and an Output and Outcome Monitoring Framework (OOMF) Clinic.  29 Global/National experts will be speaking on diverse urban finance issues.

Smart Cities Mission (SCM) is a transformational Mission aimed to bring about a paradigm shift in the practice of urban development in the country. Of the total proposed projects under SCM, 7,905 projects worth ₹1,93,143 crore (94% by value) have been tendered so far, work orders have been issued for 7,692 projects worth around ₹1,80,508 crore (88% by value). 3,830 projects worth ₹60,919 crores (33% by value) have also been fully completed and are operational (10 April 2022).

Of the total investment of ₹2,05,018 crore under the Smart Cities Mission, projects worth ₹93,552 crores were proposed to be developed by Center and State funds. To date, almost 100% of these projects i.e projects worth ₹92,300 crores have been working ordered. The Financial progress in the Smart Cities Mission has accelerated too. In 2018 when the total expenditure on the mission was ₹1,000 crore, it increased to ₹45,000 crore. The utilization percentage of the total GoI funds released to cities is 91%.

Projects developed under the Smart Cities Mission are multi-sectoral and mirror the aspirations of the local population. To date, 80 Smart cities have developed and operationalised their Integrated Command and Control Centres (ICCCs) in the country. These operational ICCCs functioned as war-rooms for COVID management, and along with other smart infrastructure developed under the mission, helped cities in fighting the pandemic through information dissemination, improving communication, predictive analysis and supporting effective management.

Crossing Borders: An Enigma for Humans