With the short supply of labour, the wage rates and the working conditions must go up, but we have not seen any initiatives for the same other than short-term investments to get the labour back.

Since the outbreak of COVID-19 pandemic in India, the whole nation came to a standstill and almost all the industries faced huge losses with the lockdown. However, millions 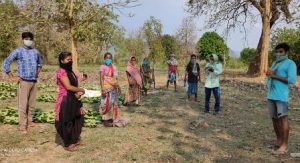 of labours, the backbone of the informal sector, were the worst hit. With factories and workplaces shut due to the lockdown, the plight of workers increased manifold, as they were rendered jobless with no income to sustain their families. Millions of families faced food shortages and uncertainty about their future. In response to the difficulties faced by the people, the government introduced many schemes and benefits, but their actual reach to the people who were most in need remained questionable.

In this context, Praxis India and Partners in Change (PIC) initiated a dialogue to understand the ground reality, bringing forward the voices from the margins with a focus on labour: The State of India’s Poor: Focus on Workers. Tom Thomas, Chief Executive Officer, Praxis, chaired the discussions.  While moderating the discussion, Dheeraj from Praxis gave a presentation on  the overall status of workers’ entitlements, covering the gender  and caste distribution, work under MGNREGA,  access to credit, job loss during the lockdown period and wage payment, working conditions, etc.  The discussions were primarily centred on the data collected from the ground through the joint initiative of Praxis and PIC – ‘COLLECT: Community-Led Local Entitlements and Claim Tracker’. The data were collected by engaging with 2290 workers from different states. It has been found that among 1672 workers 62-72 per cent did not get jobs during April to June due to which the trend of indebtedness became prominent during this time. The workers had to take loans for their basic needs of food and grocery because of no income generation during lockdown period. Loans were also taken to repay old debts, medical expenses, rent and electricity, to return to native place, for small business purpose or for education purpose of their children. The data also projected that workers involved in the sectors of the economy such as agriculture, construction, garments, beedi industry, and also the sex workers, were gravely impacted.

Panelists of the webinar and social activists, Kuldeep Kumar Baudh, working with Dalit and other marginalised communities for the past 15 years and Vishnu Prasad having 18 years of experience working with the MSM community, Hyderabad, highlighted the challenges faced by the unorganised sector workers. Sex workers, transgender workers and manual scavengers faced immense challenges during the lockdown. With no job cards, ID cards, ration cards or bank accounts they were excluded from all the government-aided relief schemes and funds.

“These communities, who already faced a lot of discrimination in the society, were further discriminated in the name of ‘Social Distancing’.

The social stigma faced by the SC/ST communities was so intense that even pregnant women from the manual scavenging profession were subjected to the new horror of contagion from the virus apart from untouchability”, said Kuldeep. They also faced discrimination during the food supply as they were always forced to stand at the end of the queue. Due to this they received no or minimal food grains as the supplies got exhausted by the time it was their turn to receive. Further, they had to take loan to procure food for them and their families. “For the transgender the situation was even worse as many of them were rendered homeless as they were not able to pay for their rented accommodation due to no source of income. Also, there was no separate queue for their gender to collect ration”, said Vishnu Prasad. The stigmatisation towards these communities, which was already rampant in the society, surged up due to the pandemic. 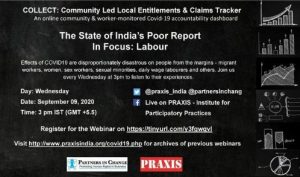 Voicing the dilemma of beedi workers, Munni Begum, associated with Ek Saath Abhiyan programme of Sahyog, Lucknow, and with 15 years of experience working on social issues concerning Dalit and Muslim women’s rights shared, “The daily wages between Rs 65 and Rs 85 per day of the workers are very low and they were also not linked with the various government schemes, which further made it difficult for them to make ends meet during lockdown. The beedi workers have been facing several occupational health hazards, apart from issues of abortion, back pain, tuberculosis, asthma, etc.”Further, 90 per cent of the beedi workers in Jaunpur District are women belonging to the Muslim community and among them 60 per cent are adolescent girls who support in the work at the cost of their health and education.

People from small-scale industries and vocations also had a similar story to share. Muthusamy, a sub-contractor in the garment sector of Tiruppur for the past 15 years, highlighted the situation of unemployment and the social security crisis after the pandemic attack. “Complete shutdown of all the industries rendered several workers jobless for five months now and for the other contract-based workers their employers decreased the wages on a regular basis. Only a few companies are offering Provident Fund (PF) and Employees’ State Insurance (ESI), and90 percent of the companies do not offer them and the workers do not receive any other benefits”, he shared.

Dharma Malviya, a member of Phoolan Devi Youth Group in Madhya Pradesh, spoke about the difficulties faced by the sex workers. Most of the women stayed back in the states that they worked and had to take loan to survive. Their family members also had to take loan to get them back in their hometowns. Either due to lack of awareness or incomplete documents they also did not have access to the government schemes and aid. Samsung Suna, a textile factory worker from Bargrah, Odisha expressed his predicament after coming back to his hometown in a car all the way from Tamil Nadu, “I do not have any work at the moment. This is just not me, but most of us are facing the same. We have families and it is becoming difficult to support the members with time.”

Registration of the migrant workers was another issue that came up in the discussions. Ramu Anand, founder, Dr Bhim Rao Ambedkar Jharkhand Dalit Vikas Samiti, highlighted the inaccuracy of the registration data in Jharkhand as only the workers who returned by train and some who returned by bus were registered. The workers who took the most challenging and life-threatening task of walking hundreds of kilometers back home were left unregistered. “Even after registration, limited work opportunity was given under the MGNREGA. Only 52 per cent migrant workers were registered in Jharkhand and distribution of ration was also not done properly here.

Because of this, people and their families are again migrating back to Delhi, Punjab and Gujarat to find work as they have nothing to eat at home and have to take loan for a two-time meal.”

When asked about the quarantine experience of the labours from one of the participants, Ramu shared that even after returning back to their hometowns the labours were further traumatised during their quarantine period as they were kept in a place where they were provided with minimal food, unhygienic accommodation and poor healthcare facilities.

As the country is now progressing with its unlock phase, the situation for the migrant workers and unemployed marginalised communities is far from normal. Dr Rahul Sapkal, an Assistant Professor at the Centre for Labour Studies, School of Management and Labour Studies, Tata Institute of Social Sciences, Mumbai, interviewed 11,000 people during the lockdown and 25,000 post lockdown found that the unemployment rate had went up to 78 per cent affecting the supply chain enormously. According to him this situation will take another two to three years to stabilise. He also shared that after having gone through such horrid incidences and experiences, majority of the working force has not yet gathered enough courage to leave their families and go back to their workplaces in different states. “Caste-based occupations have surfaced again due to lockdown, and hence the opportunity that we got to break the cast cycle was completely lost. Most of the landless labours who migrated back to their homes are planning to resort back to their family occupations. The ones who have migrated back to the metro cities have to bear the expanses of quarantine and COVID test on their own which is like an extra burden on them”, said Dr Sapkal. S. Ramanathan, co-founder of Development Solutions, a research and consulting organisation in Delhi, concluded, “There is a significant degree of informality in the country and there is an extreme diversity in the informal sector. Despite the GST and demonetization, the informality continues to persist which we thought will go away soon. In 2004-11 when the economy was good, the informal sector was still at a dead end and now when the economy has recorded an all-time low, we can only imagine the plight. We need to see how we can address that”, he stressed.

“This pandemic has given us many lessons especially in this particular context of labour. With the short supply of labour, the wage rates and the working conditions must go up, but we have not seen any initiatives for the same other than short-term investments to get the labour back. This will test the neutrality of the prime moving force the economists want us to believe as the supply demand equation. We will have to see if it is tilted against labour or in favour of the capital,” said Tom Thomas.