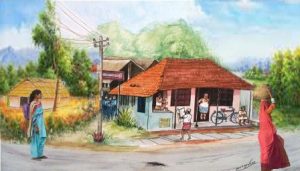 Maina got down from the last bus reaching her village. She started walking on the kacha road towards her home. Always energetic, her 5-feet tall body was looking tired today; freshness on her wheatish skin was marred by tensions.

Maina entered the courtyard and sat down on the platform raised against the wall of her kacha house. She hung her bag on the wooden hook fixed on the white lime-coated wall made of soil and stones. She poured the cold water filled up in the copper pot on her dusty feet and then splashed it on her face repeatedly and wiped it with her mother’s cotton Sari spread over the wall of twigs. As soon as she was done, Shubhangi gave her tea in a steel glass. Holding the hot glass in her hand, Maina sank in the Charpai, covered with the thick homemade knit made from her mother’s old Saris.

It has been three years since Maina joined the grassroots movement fighting for the land rights of the tribes. In these three years, she had become the face of the Sanghatan and participated in all the agitations against passive and apartheid governance. At the age of nineteen, she became very popular in 20 villages where the movement was active. Maina was the pride of her mother and many women from villages for whom she was fighting. She provided a platform for them to come together and gave them the courage to speak sans the long veils covering their faces.

On that particular day, her whole being was crying and she wanted to ask the group of men, “Why can’t we raise the voice for investigation in Sudha’s murder? How can we keep quiet when a nine-year old, Dalit girl was raped and murdered in our neighborhood and her body discarded in a mustard field? How can we blame her mother for not taking proper care? And, how can we say a nine-year old was ‘characterless’?” She wanted to ask these and more in the Sanghatan’s meeting, which was organized after a week of the incident in a nearby village. But she couldn’t utter a word as the male members with all the decision-making powers pushed the incident to “not so important” in the priority list of Dharna. She couldn’t understand why the dominant personalities were silent and left the decision to members who were not sensitized to handle issues concerning violence against girls and women.

The spectator male mob surrounded Sudha’s body, her lonely mother wailed inconsolably and the women from the community were shunned away from the scene which made her weak. Little Sudha couldn’t get justice from her community where she was born, learned, played and laughed…except the only sympathetic word “unfortunate child”.

Shubhangi was aware of Maina’s restlessness. “They don’t value the lower caste girls”, said Shubhangi, while turning the chapati on the embers. She continued, “Generations have passed and this feudalism has still not ended, they still grab all those flowers grown in the pasture and destroy them for their carnal pleasures.”Shubhangi was speaking with the voice of frustration and as well as hope. “But you are right my dear child in talking against it. You have great capacity. You are the incarnation of “Godadevi”, who lived in our land hundred years ago and saved her chastity from those so called priests. In tomorrow’s meeting, I will speak to the women from each village to hold Dharna, and we will do it for the sake of our daughters. Sanghatan is ours too,” said Shubhangi with confidence. She continued, “Listen carefully-organizing Dharna for Janch in Sudha’s case is not only your decision, this is the decision of all the women, and we are all with you.”Saying this, a mystic grin spread across Shubhangi’s face, which brightened in the flame of the chula. “This is the beginning of resistance which will mobilize under young Maina Devi’s leadership”, uttered Shubhangi, staring towards the burning embers.

Shubhangi’s words were like the stream of consciousness, which was taking Maina with unlimited speed of willingness and vigor. This willingness now got the hold of understanding of ages and experiences of life’s rigorousness, which was molding her understanding. She has chosen the way of negotiation with the patriarchy while remaining firmly rooted inside the same community- the community, which proclaims women’s rights on one hand and at the same time cuts their wings with other invisible hands.

Women of substance face the power relation everywhere. Patriarchies are multiple and exist in household, community, state, caste and in other identities. Like Shubhangi, women need to be conscious about the problems other women face, and like her they need to stand with her, when things are not going right. They need to support her with that age old stream of consciousness. Only then, sufferings will melt away and she will be able to assert herself.

The writer, an independent researcher, writes for Marthi and English dailies. She can be reached on twitter @RujutaD1

In wake of Citizenship Bill, Assam Accord gets Cabinet approval