Study Gains New Insights into the Evolution of Galaxies

The researchers have published a report on the study in the April issue of the Nature Astronomy journal. 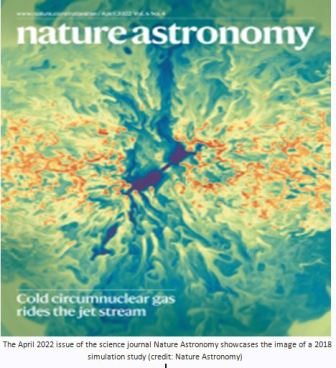 that can traverse large distances through the galaxy and beyond. The jets have long been suspected of driving the evolution of galaxies. However, it has so far remained just a suspicion.

A new study by an international team of astronomers, including Prof. Dipanjan Mukherjee from the Pune-based Inter-University Centre for Astronomy and Astrophysics (IUCAA), has unravelled the mystery. The team has shown that even a relatively weak jet from a supermassive black hole can clear the nuclear region of the galaxy of its gas, indicating that they may be playing an essential role in the evolution of their host galaxies.

The IUCAA press release said that the astronomers found the gas being steadily blown away from the galaxy’s central regions, pushed by the relativistic jet. Although the power of the jet observed in radio wavelengths was moderate, it was still capable of clearing out nearly 75% of the central gas reservoir.

Noting that it was the first unambiguous detection of a relativistic jet from a supermassive black hole removing the gas in a galaxy, the release said competing mechanisms that can also cause such outflows have been ruled out. “The ejected gas is, however, not fast enough to completely escape the galaxy and will eventually fall back in”, it added.

The findings are considered significant since even while relativistic jets from supermassive black holes have long been suspected of driving the evolution of galaxies, so far, only their impact as a source of heating the circum-galactic atmosphere has been considered.

Numerical simulations conducted earlier by Prof. Mukherjee and colleagues predicted such jets’ strong influence on the host galaxy. But no proof was available. Observational campaigns had found signatures of jets injecting energy in the interstellar medium of galaxies. However, the effect of radiation from the central black hole could not be completely ruled out. “The new results from this study provide definitive proof that relativistic jets can indeed substantially affect the host galaxy’s gas. This may significantly impact how and over what timescales stars are formed in such galaxies, which are topics of active current research”, the release added.

It further noted that lower power jets are found more frequently than their higher power counterparts and, observed, hence, if such low power jets have the potential to influence their host, relativistic jets from such black holes are expected to play an important role in the evolution of their host galaxies, contrary to what has been thought before.

This study is also significant in that it showed a strong synergy between observational results and the simulations of relativistic jets interacting with a dense interstellar medium of a galaxy, carried out by Prof. Mukherjee in 2018. Astronomers found remarkable similarities between their predictions of the simulated gas kinematics and the observed dynamics of the molecular gas.

The study involved observing the motions of molecular gas in a galaxy called B2 0258+35 using the NOEMA (Northern Extended Millimetre Array) telescopes. Besides Prof. Mukherjee, the team included Suma Murthy, Raffaela Morganti and Tom Osterloo from the Netherlands Institute for Radio Astronomy (ASTRON), Pierre Guillard from the Institutd’Astrophysique de Paris, France, Alexander Wagner from the University of Tsukuba, Japan, and Geoffrey Bicknell from the Australian National University, Australia. Dr Bicknell had helped interpret the observed results and their comparison with theoretical simulations performed by Prof. Mukherjee and colleagues in 2018.

The researchers have published a report on the study in the April issue of the science journal Nature Astronomy journal. The journal showcased the image of Prof. Mukherjee’s simulations from 2018 on the cover page.

Curbs on Biomass Burning to Beat Pollution in Delhi