Amidst the pandemic, Indian Ed-tech start-ups have received a major burst in its numbers, from a total investment of $553 million in 2019 to gaining $2.22 billion in 2020 alone.

From being hailed as the land of Gurukuls to a factory churning out mass produced engineers, India’s education system has a rich legacy. Until recently, our archaic educational landscape received very few 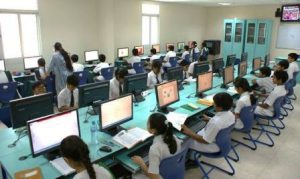 changes. Many of our schools teach their students from an outdated syllabus and evaluate them from an unchanging and rigid examination. But quality is not the only problem that India’s education faces, quantity is as well. IBEF estimates around 37.9 million students were enrolled in higher education in 2019 making us the world’s largest pool of students. But this has created a massive gap in the ratio of teacher per student.

An estimated 39,000 colleges teach 27.5 million undergraduates and 4 million postgraduates. A majority of these students (~ 80 per cent) reside in India’s rural areas making their access to good education more difficult. But where geographical access failed, internet access thrived. With high-speed internet and an already available access to smartphones, the Internet helped many students continue their education even in the midst of a global pandemic. With the coronavirus infused lockdown, not only the students but even schools and colleges have started to appreciate the notion of learning online.

While many educational institutions were tediously coping to transform their traditional way of teaching into an online mode. Many ed-tech startups had already mastered the art of delivering education virtually. Ed-tech had solutions for each and every student’s demand. Lectures on data science, languages, competitive exams and many more were available to the student at the click of a button. Not only was the access easier but it made gamification of learning while letting students finish courses at their own pace with expert faculty at hand to solve any doubts.

Apart from these factors, another explanation could be the number of jobs an average worker changes in her lifetime which according to Business Today is 5 – 7 jobs. This forces people to learn more skills or get better at existing skills. Another motive to earn skills online could be our sheer lack of sound technical workforce.

Global Competitiveness Report by WEF in 2019, ranked India 107th for its ease to find vocationally and digitally skilled employees.

It ranked us 120th out of 141 countries for ICT adoption into our market. Here, ed-tech offers valuable training where the above mentioned vice could be eliminated as more of our workforce gets the opportunity to skill up.

The ed-tech companies primarily have three modes of earning cash. The highest revenue generator is Advertising. The other two methods are ‘Course subscription’ and ‘Upgrades’. In the former mode the student pays for the course that interests her. The latter initially charges nothing for teaching the course but asks for a fee if the student wants a certificate. But more likely mode of receiving cash is by generating funding. In 2020, 31 ed-tech companies received funding and 61 received seed funding.

Mint reports the Indian education system to be worth an estimated $100 billion and it has seen a 70% increase in the number of students registering for online courses. By 2018, around 3500 ed-tech start-ups had received $700 million in funds. Till March 2020, India’s biggest ed-tech company – BYJU’s had 45 million free users and 3.5 paid subscribers. The numbers have blasted after the pandemic and BYJU’s now has 70 million free users and 4.7 million subscribers. This has made BYJU’s the most valued ed-tech company in the world. Its competitors, Unacademy, UpGrade and Vedantu, too gained numbers while making Unacademy’s value over $2 billion.

Many ed-tech companies are making the most of India’s fertile education system. And one of its holy-grails is the test preparation sector. Bengaluru’s BYJU’s in an attempt to maximize the gains from the test prep sector, has in January 2021 acquired Aakash Institution by signing a billion dollar agreement. Aakash Educational Services was the cornerstone of preparing students for competitive exams in an offline mode. This deal gives BYJU’s access to Akash Institute’s 200 coaching centers.

It has relaunched it as Amazon Academy which helps students crack India’s Joint Entrance Exam (JEE) for engineering colleges. Currently it is available free of cost to every aspirant.

India’s National Education Policy plans to revamp the existing educational sector into one that encourages concept-based learning. Out of its many recommendations, a key one is to inculcate Ed-tech learning to students in an attempt to go beyond ‘chalk and talk’. NEP will transform schools into nodal agencies that will allow undivided access to online learning. If this plan becomes successful then it would be the most impactful Public-Private partnership the country has ever witnessed. It also opens the opportunity to transform India into the key provider of online education in the world.

With high expectation and high investment it is a possibility that many local and global players will enter this fertile and profit-reaping educational sector. The Scroll estimates that with so many players in the market, overtime the severe competition will force many for mergers and acquisitions. At the end only a few players with big pockets will be able to stand in this sector. There’s no sound prediction on whether ed-tech companies will continue its steep upward graph of profits it has received during the pandemic. Or if its golden age will come to an end. Irrespective of the outcome there is a lot for us to learn