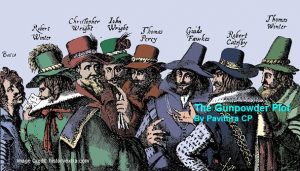 It was that gent! Mr. Robert Catesby. He planned it all!’

My dress suffocates me! I really do hate the black tailcoat which itches my body very badly. I feel the ruffles. Well, I need to get accustomed to it now of course. The black hem wraps itself around my slender body. My hands are sweating beneath the white gloves and my hair neatly combed behind. I need to keep an eye everywhere, well, just in case.

The day has come, the big day! For both of us—me and the King himself! I will be proclaimed the minister of King James I. For me and the Catholics, a dream comes true and for him – a lasting memory! I could feel eyes peering behind me, doubting my actions. I walk forward, following His Majesty and bow down- respectfully. The hall is brightly lit and decorated. The parliament, where the ceremony was taking place, was filled with world-class delegates. And suddenly, I hear the sound of marching feet. ‘It was that gent!’ I turn to find a trembling finger pointing towards me. Fawkes! And that’s when my destiny, my fate changed – Forever and ever! And I hold myself responsible!

November 4, 1602
The carriage moves over the rough road. I doze off to slumber. My head nods quietly as my body rocks side to side. My trusted mates sleep by my side- well aware.

The whites- the oppressors. Us Catholics? Well, the oppressed. The red burns on my father’s back turns pale- just to show up all over again tomorrow. The lashes go down on his back. The boot thrusts his gut. The eye of the English peers down upon the Catholics. And we suffer. Daily.
The thumping of hooves reminds me of the whips that sucked my father’s blood. I inhale the unforgivable stench of pure Catholic Blood in the England air.

“The persecution of Roman Catholics by the English government has to end. In the hope to replace the country’s Protestant government with Catholic leadership, my blood boils…..Our blood boils.”

The steps down the cellar creaks. I am well aware of the fact that now I hold a big name in the King’s heart. Well, this comes with multiple privileges! “Uh, I need to check for documents in the cellar.” A well said lie. I open the door of the parliament cellar to find my accomplice surrounding the table, formulating a plan.
Voices overlap.

“Let’s do it on the 7th of the coming June.”
“I agree, anyways, 7th is ‘perfect number of God’ ”
“No way! Not so fast!”
I put my hand up and a hush fills the room. Well, what can I say, I like to be in control.
“We do it on a busy day, with hundreds of delegates. We do it on 5th of November 1605. The day when I gain the full trust of the King himself. The day when hundreds of delegates would come together in the Parliament. The day I supposedly become the minister. The celebration is so important that planning has already started. We will make this a success. To the glory of Catholics!””To the glory of Catholics!”

November 3, 1605 (T-minus 2 days)
Our beards have grown. The strong framework of ribs can be seen through our emaciated body. We look a little better than stick ourselves- well, everyone but me. I am well-fed by the King’s maids and live my life to the fullest. The fact that this will all be over in two days lingers at the back of my mind.

The carts are loaded. The goods have been transported through the secret passageway and into the dark cellar, kept well away from the mice. No men are supposed to light a cigar inside the cellar for two days, well just in case.

11:00 pm
I just had a major fright. The second minister, Mr. Carros found me lurking by the cellar. I just smirked and told that some documents had to be retrieved from the cellar. I have not told this to my fellow teammates. I just hope Mr. Carros did not find anything suspicious. I remind myself that All is Well.

November 4, 1605. (T-minus 1 day)
I have not slept a bit. My teammates are snoring away like they have not a care in the world. I pray to Mother Mary for the ripened fruits of success.

The sleepless nights. The empty stomachs. The dry throats and the burning backs with red lash marks. We need Justice! We need Freedom!

11:30 pm
“Mr. Catesby! You are needed at the chamber.”
This shook me back to reality.
Had they suspected anything?
Oh Mother Mary! This cannot be happening!
THUD! Gasp!

I move forward, wanting to look behind but stay impotent. I stay aloof, the fear lingering at the back of my mind.

(The soldiers march down the cellar. The door is broken open to reveal six men sleeping soundly, now wide awake.
The mice scurried away as the hands are cuffed uptight. The young man, Fawkes is taken into custody and the goods discovered.
“How many of them?”
“36 barrels of gunpowder sir!”
“Thirty-six! Oh Lord have mercy!”)

“Mr. Catesby, we have found six men under the cellar who were planning something big. We have them under our custody. We also found them having thirty-six barrels of gun powder!”
“Thirty-six! Oh Lord have mercy!” I exclaimed. Really, Lord have mercy upon us!

(The ring of those last words still in my ears)

(This short story is a historical fiction. The Gunpowder Plot was a failed attempt to blow up England’s King James I (1566-1625) and the Parliament on November 5, 1605. The plot was organized by Robert Catesby (c.1572–1605) in an effort to end the persecution of Roman Catholics by the English government. Catesby and others hoped to replace the country’s Protestant government with Catholic leadership).

The author is a budding young writer, currently finishing her secondary school education. She is a curious and proactive, interested in preserving the foundations set by classical literature by adapting them to modern themes and trends. She can be reached on twitter @pavithra_cp