The Highs and Lows of Hypertension: Study Reveals Alarming Truths

The findings in the recent study on Hypertension care published in PLOS Medicine reveal that Hypertension is highly prevalent in India, while the proportion of adults with hypertension who are aware of their diagnosis, are treated but the control is low. 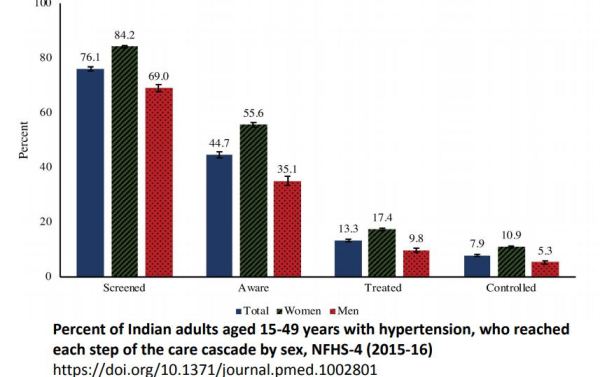 Hypertension is a major risk factor for cardiovascular diseases, a leading cause of young deaths in India. There was no population-based large scale studies conducted in India regarding the steps for screening and approaches towards successful control of hypertension. This has resulted in the inadequacy of the care and treatment.

Dr. Lindsay Jaacks, faculty at the Harvard T.H. Chan School of Public Health and visiting faculty at Public Health Foundation of India (PHFI), stated, “This is not just an assessment of health systems. We need demand-side interventions to raise awareness in India that hypertension is relatively easy and cheap to treat, and that keeping it under control can have huge benefits in terms of preventing heart attacks and stroke.”

Recently, a first large scale population based study on hypertension care in India published in PLOS Medicine was carried out by researchers at the PHFI, Harvard T.H. Chan School of Public Health, Heidelberg Institute of Global Health, University of Birmingham and University of Gottingen.

For the purposes of this study, researchers have used National Health and Family Survey (NFHS-4, 2015-16) data of 731864 individuals aged 15-49 years, which covered each district of the 29 states and 7 union territories of India, which made it nationally representative.

“Hypertension may not have any symptoms, diagnosis in early phase is untapped due lack of awareness and regular medical checkups. Hypertension can be avoided with regular checkups and life style modifications. India needs to focus on this silent killer to reduce preventable premature morbidity and mortality burden due to cardiovascular diseases.” said author Dr. Ashish Awasthi, Assistant Professor (INSPIRE Faculty) at PHFI.

Also, there exists a huge state-level variation in hypertension screening. Screening of hypertensive individuals was lowest in Madhya Pradesh (61.3 per cent) and highest in Haryana (93.5 per cent). More than half the number of Indians aged 15-49 years with hypertension is not aware of their hypertension status. Awareness level was found to be the lowest in Chhattisgarh (22.1 per cent) and highest in Puducherry (80.5 per cent). 27 major states/union territories have blood pressure control rates below 10 per cent. Daman and Diu was the highest, but still only 1 in 5 adults there are under control.

India forms 18 per cent of the world’s population and is expected to be the most populous country by 2025, India’s ability to improve hypertension care will have decisive impact on the world’s ability to achieve the international NCD goals, including SDG and the WHO’s Global Action Plan for the Prevention and Control of NCDs.

The study has some grave implications for the country and its demographic dividend. Hypersensitivity is far more commonly occurring than has widely been believed as yet, and urgent measures need to be taken in order to control this. There is a need to improve hypertension awareness, and awareness around care and control for all Indians – but specifically amongst the most productive years (15-49 years).

Dr. Dorairaj Prabhakaran, Vice President, Research and Policy, at PHFI and one of the authors of the study said that detection of hypertension is straight forward, treatments are simple yet effective, and hence hypertension can be easily controlled. Control of hypertension prevents future stroke, heart attacks and deaths. However, it is an unfortunate paradox that India does not perform well in any of the measures of detection, treatment and control. They expressed faith in the new National Health Mission through the health and wellness clinics and hoped they have the potential to address this issue.

“We hope that this publication facilitates health policy making for hypertension care in India by providing detailed, yet intuitive data on the current care status and a benchmark for measuring future health system performance,” said Jonas Prenissl from Heidelberg Institute of Global Health.

The study, titled ‘Hypertension screening, awareness, treatment, and control in India: A nationally representative cross-sectional study among individuals aged 15 to 49 years’, appeared in PLOS Medicine on May 4, 2019.