The failure of AAP and Congress pre-poll alliance in Delhi is mainly attributed to the immature political bargaining and postures of AAP, and the stage is now set to see a tough triangular poll battle in the national capital where AAP feels soaring political heat. 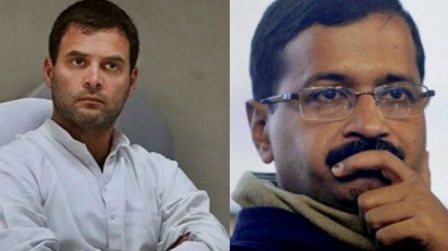 The Aam Aadmi Party (AAP) was desperate for a pre-poll alliance with the Indian National Congress for the General Elections of 2019. It was only in the last week of April that the Delhi residents came to know the parties’ candidates for the 7 Lok Sabha constituencies. In fact, almost a month ago, AAP had announced their candidates for 6 Lok Sabha segments, a sly strategy for bargaining an alliance with the Congress. Understanding their electoral position in Delhi, Congress also seemed inclined towards an alliance with AAP in order to beat the mighty BJP in the national capital. The national party, Congress, was literally trounced in the 2014 Lok Sabha elections as well as the 2015 Assembly elections with zero seats. The Congress does not want an episode of failures such as 2014, where the BJP won all 7 Lok Sabha seats or 2015, where AAP won 67 assembly seats out of 70. Under the leadership of Rahul Gandhi, the party attempted a portrayal of political decency and indulged in coalition politics by not announcing their candidates till the breakdown of the alliance discussions.

The current political situation in Delhi is hardly like 2014 or 2015 anymore. This is the very reason that the BJP delayed their announcement of candidates in Delhi. This strategy was meant to observe the outcome of AAP-Congress pre-poll alliance talk, and decide their candidates accordingly.

AAP has lost its political sheen as a promising alternative political party in the Indian political landscape. The new party was an offshoot of a strong anti-corruption movement that garnered a political wave across the country. And it had apolitical potential to emerge as an alternative political party in India. The intra-party democracy that the new party boasted to have had shameful collapse following the undemocratic and dictatorial expulsion of some of its worthy leaders, such as Yogendra Yadav, Prashant Bhushan, Prof. Anand Kumar, Prof. Ajit Jha and so on. Since then the AAP is running with a set of residual leaders under an absolute leader.

After their whopping victory in 2015, AAP’s electoral status in Delhi has been steadily waning. In April 2017, AAP faced an embarrassing defeat in the by-election held for the Rajouri Garden Assembly constituency in Delhi. BJP won the seat and the AAP candidate was relegated to third position after the Congress, and lost his deposit. Followed by the by-election defeat, the same April 2017 witnessed another defeat for AAP, this time in Municipal Corporation of Delhi (MCD) elections. BJP had a thumping victory, with 184 seats out of 272in 3 city corporations. The ruling party in Delhi could only manage 47 seats, with a crucial decline in its vote share.

AAP’s national ambitions also failed to make any impact in the state assembly elections in Punjab, Goa, Madhya Pradesh and Rajasthan. Despite the political setbacks in these states, Chief Minister of Delhi, Arvind Kejriwal, along with his senior colleagues, harbours a delusion that they have a massive mass appeal in Delhi.

It was AAP that first initiated the proposal of having an alliance with the Congress in Delhi to beat the BJP’s dominance. It needs to be reiterated that AAP came to power by fiercely attacking and exposing the rampant corruption that took place during the tenure of the UPA government at the Centre, and the Sheila Dikshit government in Delhi. If they would have sealed an alliance with the Congress, there would have been many questions that they would have had to face, including their stance on the1984 anti-Sikh riots, etc.

The problem of the grand old party is that they realise their problems but are unable to deal with them, or undertake the right measures. For the Congress, it was a dilemma over whether to enter into an alliance with AAP or not. There were divisions between the leaders for the alliance, and those opposed to it. This was mostly due to the changing mood in national politics and the recent wins registered by the party in some important state elections in Rajasthan, Chhattisgarh and Madhya Pradesh. However, at the same time, they considered that AAP is losing its political clout in Delhi. A possible analysis is that in the Lok Sabha Elections, the votes, including the minority vote bank that went to the AAP fold in the 2015 Assembly elections, would roll back in favour of the Congress. Some of their internal surveys seemed to validate this argument, and gave fuel to claims like people would think wisely before voting.

It is true that voters tend to weigh the current political scenario before casting their vote; however, 2-3 Lok Sabha MPs from AAP would not impact the formation of a government at the centre. As a leading opposition party, for the Congress, even 2 or 3 MPs would seem to be a potential advantage that could stake power at the Centre.

The Congress pride, or their habitual conceit, has also played a role during the alliance talks with AAP. At the cost of the Delhi alliance, they decided not to succumb to AAP’s wily strategy of bargaining for alliances in other states such as Haryana, Punjab and Goa, where (except in Punjab, even though they are in trouble) they do not have any obvious or proven electoral presence.

The Congress is often known for their arrogant decisions within the party. For instance, in Delhi, close to the announcement of the Lok Sabha election, the party replaced its dynamic state president Ajay Maken with an outdated leader, former CM Sheila Dikshit. This move has created confusion amongst the followers of the Congress. For Congress, winning as many seats as possible in the 17th Lok Sabha has now become a matter of survival. The 2014 Lok Sabha election was historically an electoral drought for the Congress party with only 44seats. Crossing the numbers from a double digit to triple digit is probably a Herculean task, and it needs to be done under the leadership of Rahul Gandhi.

Interesting to observe here, is Priyanka Vadra Gandhi’s latest entry into party’s top leadership, which seems to be a pre-emptive strategy by the Nehru-Indira family to retain their clout in the vulnerable Congress party.

AAP, a new party that lacks experience at the national level and with no tried and tested tools for crisis communication, wanted an ambitious alliance for 33 seats with the Congress, the grand old party of India, in four states, including Delhi. AAP ended up projecting themselves as an immature party, with fragile postures, and as failed collaborators. In fact, the failure of the pre-poll alliance between AAP and the Congress seems to be an outcome of AAP’s immaturity vs. the Congress’ pride.

Man-made earthquakes triggered by fracking and dams are not localized: Study

The Highs and Lows of Hypertension: Study Reveals Alarming Truths