The Indo-Chinese Bilateralism in SCO

India and Pakistan have both pledged to engage positively on China’s call to defense cooperation within the Shanghai Cooperation Organisation framework, disallowing influences of any bilateral issues. 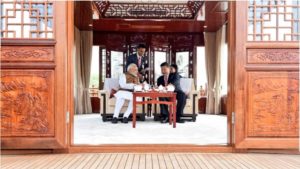 foreign and defense ministers from the eight member nations gathered for the Shanghai Cooperation Organization (SCO). This marked the debut of neighbours and bitter rivals India and Pakistan as full members. The 15th SCO Defence Ministers’ Meeting hosted at Beijing saw defence minister Nirmala Sitharaman meeting her Pakistani counterpart Khurram Dastgir-Khan. External Minister Sushma Swaraj was also present to meet with her counterparts from other member nations on the very same day for the Foreign Ministers’ Meeting. The defense meet dealt with counterterrorism measures and discussed regional issues, focusing on the security situation in Afghanistan. The foreign ministers’ meet, on the other hand, deliberated on political alliances and finalized arrangements for the annual SCO summit in Qingdao in early June.

These meetings are set to redefine the future relationship between the two Asian giants China and India. India stops short of supporting Beijing in its Belt and Road Initiative at the SCO meeting. The government fears that the China-Pakistan Economic Corridor (CPEC) will cross through the disputed Kashmir occupied by Pakistan and pose a threat to Indian territorial integrity. India howbeit has softened its critical calls against the project. The government nonetheless cautiously avoids pusillanimity that runs the risk of being misconstrued as the country’s capitulation to China.

The defence ministerial meeting discussed non-traditional threats to security, the fight against terrorism, separatism and extremism. India and China agreed on checking the propagation of terrorism, and a calling for strengthening of the joint efforts of SCO members. There was consensus on an expansion of the scope of tasks dealt with by the organization – a transition from the combating against terrorism in the SCO to strengthening defense aptitude and responding to common external threats.

Scholars like Ashok Kantha and Alka Acharya claim that the Wuhan meet was never meant to be outcome oriented as much. They argue that an intra-Asian conflict is detrimental to the realisation of the Asian Age, and that such informal meetings might deal with structural challenges in relationships in a meaningful manner. This creates a roadmap for mutual gain and development.

China’s longstanding commitment to Pakistan as an ‘all-weather friend’ rebuked India’s comment on Pakistan being called a ‘terror export factory’. While Sitharaman has been subtler in her words against Pakistan in the meeting, India’s call against both China and Pakistan for their alliance was distinctly noted. Indian Prime Minister Narendra Modi also did hold several meetings, both formal and informal, with Chinese President Xi Jinping ahead of the SCO Summit to discuss such unsettled issues and champion mutual sense of amity.

The first of such meetings was an informal summit – being held at Wuhan. Discussing strategic communication that helps heal the complex relationship between the countries, the meet served mainly to forge a common understanding on the future direction built upon a common developmental aspiration and practical management of differences with mutual sensitivity. The outcome also included an issuance of strategic guidance to the militaries to strengthen communication. The Indian official follow-up report called to “enhance predictability and effectiveness in the management of border affairs”. The intention was to prevent incidents of the Doklam variety. The meet, however, has not yielded any significant discussion on the differences of the two nations on the CPEC.

Resultantly, the Indian and Chinese armies held a Border Personnel Meeting (BPM) to resolve border issues, and maintain peace along the Line of Actual Control (LAC). It ultimately is about how China and India can come together to address a larger picture of a peaceful alliance.

India and China share a common interest in economic development and trade benefits with minimal regulations. While China has the second largest economy in the world, India who is currently at the sixth position is touted to be the fourth largest economy in the next few years. Considering India’s talks on Quadrilateral Strategic Dialogue in the Pacific with Japan, US and Australia, China hopes to cut sharp deals to break this siege by improving its relations with India.

“India and China will hold several other meets discussing their plans on improvement of bilateral relations and strengthen strategic communication on security matters. The collaborative effort to maintain peace and tranquility is a welcome idea, as China assigns high importance to India.” H.E. Mr. Luo Zhaohui, Chinese ambassador to India.

The SCO has sharply grown to be a counter to the Occidental NATO dominance. India, Russia and China, the three giants in the SCO, therefore, have initiated procedures to display a common stand regarding NATO and essentially the United States. India pursues a non-intervention policy much like China, and the former’s multilateral foreign policy makes the latter its main trading partner.

The India-China relations are also a function of Pakistan’s interaction with the countries. India argues that politically convenient claims to provide an alibi for extremist outfits that materialistically support terrorism are no longer acceptable. During the ministerial meet, India stated that “the world has now realized, there are no good terrorists.” This comes as a soft rebuttal to Pakistan’s “good terrorist, bad terrorist” logic. India and China have had several foreign policy revamps over the past few years, most notably with respect to military strategy. India had earlier this year convinced China to place Pakistan on the FATF (Financial Action Task Force) terror financing grey list in June 2018. India’s support for China’s bid to vice-presidency of the FATF coupled with China’s concern over the growing terrorism threat to the CPEC cost the China-Pakistan bonhomie dearly.

SCO member-states are expected to participate in the Peace Mission joint military exercises in Russia this August. Considering the accession of India and Pakistan, China necessitates an establishment of a regulatory framework to expand the SCO military cooperation amongst members. China proposes a non-observance of political rivalry and intensification of military department interactions of SCO countries to ensure overall security. The SCO consequently has launched a new Expert Working Group to coordinate said defence cooperation.