The Past and Present of Rahim’s World

Abdur Rahim Khan I Khanan wasone of the very few great men of medieval India to have been recognised as a symbol of India’s composite culture.Scholars of Hindi literary circuit worked towards revival of Rahim’s works in early 20th century. Rahim was influenced by Hinduism and composed poetry using metaphors from ancient Hindu texts especially Ramayana and Mahabharata.

Popularly known in Hindi literary world as Rahim or Rahiman, Abdur Rahim Khan I Khanan (1556–1627) was one of the nine most important ministers (navratnas) of Emperor Akbar. Subsequent to the assassination of his father Bairam Khan, a very young Abdur Rahim of around four years was raised at Akbar’s court. Soon he proved himself to be a man of multifaceted personality and excelled with equal fervour both in battlefields and literary pursuits, therebyproving his prowess in both sword and pen. Being a polyglot, he had command over many languages including Arabic, Persian, Turkish, Sanskrit, Braj, Awadhi and Khariboli. His tremendous ability to mix languages is proved especially from a verse where he used as many as seven languages. 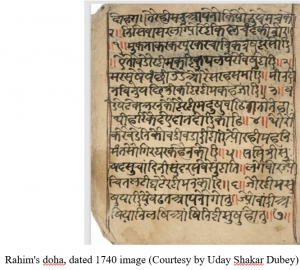 Rahim’s fascination of writing poetry in different languages could be ascribed to various reasons including inheriting it from his father Bairam Khan whowas a poet, upbringing at home with his Hindu mother and the court of Akbar that facilitated an exemplary environment with cultural pluralism ideal for creative endeavours. He was exclusively permitted by Akbar to get a personal copy made of the royal manuscript of the Persian translation of Ramayana. In his copy of Ramayana, Rahim added a note establishing the significance of Ramayana as “an esteemed book of India”. While Deva Misra was responsible to explain the Sanskrit verses, Naqib Khan translated the text from Sanskrit to Persian.

Both Hindus and Muslims worked together to create over hundred paintings in the manuscript. The complete process is a great example of cultural harmony.

Eminent contemporary poets during Rahim’s time composed numerous verses in Sanskrit, Hindavi and Persian in praise of him especially for his generosity proving his popularity and eminence. Nababakhanakhanacaritam written in Sanskrit by Rudra Kavi is a prominent champu kavya on Rahim. The manuscript with 39 folios, preserved at the Rashtrasant Tukadoji Maharaj Nagpur University describes Rahim as chief among all kings. Khwaja Husain Thana’I, one of the many Persian poets who came to India, attached to the service of Rahim praised him for his generosity. Poets like Sant Kavi acknowledged the munificence of Khan-i-Khanan, title conferred on Abdur Rahim.

Rahim had an illustrious military career spanning under two Mughal emperors over five decades. However, he is remembered most for his literary achievements. His contribution towards literature, patronage to other poets and artists, and his inclusive nature won many hearts. It is interesting that Rahim with an eventful military career was writing on themes—bhakti, niti and shringar—but has hardly written on veer rasa. He wrote from practical experiences, which probably struck a chord with people as his poetry maintained a balance between real and imaginary world.

If we try to broadly classify Rahim’smajor works on the basis of language then prominent would be the Dohavali and Nagar Shobha, mostly written in Braj Bhasha. While Dohavali is a compilation of dohas, Nagar Shobha is clearly treated as a separate work as it begins with ‘athanagarshobha nawab khan e khanankrit’ and starts with mangalacharan. Rahim enjoyed most, writing Barvai,which supposedly inspired Tulsidas to write his Barvai Ramayan. Nayika Bhed and Barvai were majorly written in Awadhi. Rahim’s Madanastak is an interesting mix of Sanskrit and Khariboli. Rahim’s futkar works consisting of Ghanakshari, Savaiya, Sortha, Pada were written in mixed languages.

One of the possible reasons for Rahim’s command over Braj Bhasha could be due to the influence of other poets writing on Krishna bhakti including Raskhan and Surdas.

There are around seven chaand of Rahim conveying the same meaning as of Surdas. Among the scholars in Hindavi literature present in Akbar’s court, Rahim was close to Gang Kavi and probably he facilitated Rahim’s interest in Hindavi and Sanskrit.

It is evident from Rahim’s work that he was influenced by Hinduism and composed poetry using metaphors from ancient Hindu texts especially Ramayana and Mahabharata. There are references of lord Krishna, Rama, Vishnu and Shiva in his poetry reflecting his devotion and dignified approach to Hinduism.

While Rahim depicts the magnanimity of Lord Rama found in every inch of Chitrakut with chitrakut me rami raherahimanawadhnaresh, he gives a lesson on morality for not to be worried with one’s social status citing giridharmurlidharkahekachudukhmanatnahi as even Krishna is fine both ways either to be called Giridhar, one who holds the mountain or Murlidhar, one who holds the flute. At the same time Rahim aptly questions if Krishna is titled Girdhar for holding the mountain why no such title is given to Hanuman with jo Rahim hanumant ko girdharkahe na koye.

Bhaktamala written by Baishnav Das in 1814 has many legends of Rahim describing his kindness and popularity. Bhaktamala also mentions that when Srinathji revealed himself before Rahim, the picture that was imprinted on him is described in the pada starting with chabiawanmohan laal ki, that he is recalling the image of Krishna and after much adulation he ends the pada with yah swarupnirikhesoi jane iss Rahim kihaal ki that he expects only those to understand his state of mind who have experienced the same ecstasy).

Rahim was inspired by many poets and in turn influenced many others. Popular legends ascribe to his interactive conversation with other poets resulting into a doha. One such interaction is supposed to have happened between Rahim and Tulsidas. Once a poor Brahmin came to Tulsidas to ask for help from Rahim for his daughter’s marriage. Tulsidas sent a letter saying suratiyanartiyanagatiya sab chahatasahoye reading, which Rahim not only helped for the marriage, but also completed the verse initiated by Tulsidas with goad liyehulsiphiretulsi so suthoye. The complete verse finds a place on the main temple of Tulsi Manas Mandir in Varanasi.

The most popular work of Rahim is the dohavali. It is said that Rahim had written satsai, collection of seven hundred doha. There are many scholarly works on him, but the first attempt to compile the scattered verses into one compendium is credited to Mayashankar Yagnik. His Rahim Ratnavali published in 1928 by Sahitya Seva Sadan, Varanasi, rightly claims to be ‘the biggest collection of Rahim’s poetry found till date’. He also clarifies that it is not possible to prove the authorship of each doha to Rahim. However, since they have already been popularised and accepted widely by people to be written by Rahim, unless it is proved to be authored by some other poet, there is no point doubting it.  Although most of the doha mentions Rahim or Rahiman, there are a few in the compilation which does not mention either. Even dohas a scribed to Rahim are also found in the name of other poets like Kabir. Such references are possible as for instance the doha of Kabir were not written by him, but transmitted orally and compiled as text much later after his death.

Rahim’s compendium of Hindi literary works include around 289 doha, more than 100 verses in Barvai Nayika Bhed and Barvai each and futkar with around 10 chaand, madnastak with eight verses and Nagar Shobha with 142 verses are the result of extensive research that was carried out by scholars in late 18th and early 19th century. Many scholarly works have been published over the past few decades on Rahim’s works and all are based on the pioneering works done by Brajratan Das (Rahiman Vilas, 1923) and Mayashankar Yagnik (Rahim Ratnavali, 1928).In earlier works, i.e.,Shiv Singh Saroj (1887), Khankhannamah (1906), Misra Bandhu Binod (1913) Rahim or his literary works finds a mention, but not prominently. It is worthwhile to mention that Rahim’s biography Maasir-i-Rahimi, which he himself commissioned to Persian writer Abdul Baqi Nihavandi, hardly mentions about his Hindavi works.

Rahim’s works were scattered in different places and the compilation must have been a challenging task. The manuscript (Image 1) dating 1740 CE consists of 60 folios with verses from other poets and towards the end contains 23 dohas of Rahim. Nagari Pracharini Sabha played a significant role in tracing the manuscripts through its researchers. Established in 1893 in Varansasi to promote Hindi literature and Devanagari script, the Sabha conducted extensive search for old manuscripts from Institutions and private collection for Rahim’s works.

The credit of bringing back the contribution of a Mughal courtier towards Braj Bhasha, Awadhi, Khariboli and Sanskrit, to public memory, after passing into oblivion for over four hundred years, can be credited to scholars like Brajratan Das and Mayashankar Yagnik both of whom were associated with Nagari Pracharini Sabha. The significance of the role of Abdur Rahim Khan I Khanan, in promoting Braj Bhasha, Awadhi and Khariboli is immense and has been well acknowledged by scholars in Hindi literary field in various publications, prominent among them is Rahim Sahitya ki Bhumika, written by Dr Bambam Singh and published by Bihar Rastrabhasha Parishad in 1979.

Rahim is still one of the most popular poets in India. His dohas are still remembered in difficult times as they inspire to sail through the challenge. Saryu Prasad Agarwal classified his doha into as many as fifteenthemes suggesting that he catered to all possible situations in life. One of his doha appropriately addresses the testing time of the pandemic and inspiring us to just wait patiently till the good days are back-