The River Interlinking Project: A Solution for India’s Water Crisis?

NITI Aayog claims that India is facing its worst water crisis in history. The solution to this is River Interlinking, where India’s abundant yet scarcely used resource is utilized: Water.

Having access to water remains an unrealized dream for many Indians. An estimated 100 million people in India’s prime cities (like Delhi, Chennai, Bengaluru, and Hyderabad) will face acute groundwater 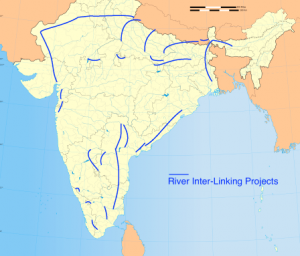 depletion. Over 600 million Indians will face extreme water stress, which will result in the death of 2,00,000 people every year. By 2030, India will run out of its supply of potable water. NITI Aayog’s Composite Water Management Index claims that “India is facing its ‘worst’ water crisis in history.” A water crisis of this magnitude will adversely affect India’s economy and productivity. This is where river interlinking raises the notion of using India’s abundant yet scarcely used resource. At its core, river interlinking takes excess water from one place and diverts it to places where there is water scarcity. For instance, taking the access and often flooding water from the Indo-Gangetic plains and diverting it to drought-stricken peninsular states. With the idea to get rid of floods in plains and droughts in the Peninsula, the Ministry of Water Resources came forward with the idea of interlinking rivers of India or known as National River Linking Project (NRLP). Under their National Perspective Plan (NPP), they have identified 14 links in the Himalayan Rivers and 16 links in the Peninsular Rivers.

It was in 1919 when Sir Arthur Cotton, Chief Engineer of Madras Presidency, first proposed the idea of interlinking Indian rivers. Years later in 1982, the then PM Indira Gandhi established the National Water Development Agency. Fast forwarding, in 2002, the Supreme Court asked the government to complete the planning by 2003 and to execute it by 2016. Yet in 2012, the SC had to again ask the government to start this project.

By 2014, the Cabinet approved Ken-Betwa Linking Project but didn’t start construction as it faced severe opposition by environmentalists.

The plan of river interlinking would create 30 links to connect 37 rivers, and effectively transfer water from a water-excess water body to a water-deficient body. For this purpose, 3000 dams will be constructed to store and transfer the water. This would be the biggest water grid in all of South Asia. The project can be divided into 2 components: the Himalayan Component and the Peninsular Component.

For the Himalayan Component, there is a plan to link 14 rivers. India’s key rivers like Ganga and Yamuna will be linked. The basins of Ganga and Brahmaputra will be linked with the Mahanadi basin. Many dams will be constructed on Ganga, Brahmaputra, and their tributaries to control flooding and divert access water to the drought-prone regions of Rajasthan, Haryana, and Gujarat. Ganga’s eastern tributaries will be linked to Sabarmati and Chambal Rivers.

The construction of the Ken-Betwa River will see a link between Madhya Pradesh and Uttar Pradesh. Access water from Ken River will reach UP’s Betwa River by 231 km long canal and irrigate UP’s drought-prone Bundelkhand. The government is keen on other such interlinking projects like the Daman Ganga-Pinjal Link (Gujarat and Maharashtra) and Par-Tapi-Narmada Link (Gujarat).

On 22 March 2021, World Water Day, Prime Minister Modi witnessed the signing of the Memorandum of Agreement (MoA) between the Union Minister of Jal Shakti and the Chief Ministers of Madhya Pradesh and Uttar Pradesh for the implementation of the Ken-Betwa Link Project. The MoA was signed 18 years after the idea of interlinking the first project under the National Perspective Plan came into existence.

By building a dam that is 73.8 m high and 2031 m long, an estimate of 2,800 million cubic m of excess water will be diverted from the Ken River. Madhya Pradesh CM Shivraj Singh Chouhan claims the project would help irrigate 1 million hectares of land. The project is seen to be completed in 8 years with a cost of ₹ 35,111.24 crores. The government is now looking for funding opportunities to construct the Godavari-Cauvery River linking, which is estimated to cost ₹ 60,000 crores.

As Indian agriculture is a monsoon-dependent endeavor, the project would help the availability of water that will boost the agricultural production in the country. Irrigated land will increase by 15 percent. More land can come under cultivation ensuring jobs for the landless farmer. The project also claims to generate hydropower. The total power to be generated is 34,000 MW (34 GW). Out of this, 4,000 MW will come from the Peninsular component while 30,000 MW from the Himalayan component. Interlinking so many rivers would create 15,000 km of river and 10,000 km of navigation. This would be commercially beneficial for logistics and daily water movement. This transportation route would be environmentally safe and create a low carbon footprint for the delivery of goods, particularly ores and food grains. Approximately 3,000 tourist spots will be built along the way. It would also add an extra protective layer by creating a waterline defense.

But for years this project has been vehemently opposed by environmentalists. The construction of many dams and reservoirs along with river alteration will risk settlements of many people, leading to displacement and a further endeavor by the government to rehabilitate and compensate them. The Ken-Betwa project alone would swallow 6.07 hectares of forest land including a chunk of Panna Tiger Reserve. The reserve is home to 50 tigers, endangered Gharials, leopards, rusty-spotted cats, and many rare and endangered species.

The project could also start a chain of disputes both at a national and international level. It would add more conflict to the existing water-related disputes like the Ravi-Beas dispute between Punjab-Haryana-Rajasthan and the Cauvery Water Dispute between Kerala-Karnataka-Tamil Nadu-Puducherry. States like Kerala, Andhra Pradesh, and Sikkim are already against this project.

Internationally, Nepal and (especially) Bangladesh have not given their vote for this project. India and Bangladesh share 54 rivers and Bangladesh fears that the river linking projects would divert vast quantities of water from Bangladesh to India.

For the project to work, India would have to gain a favor from Nepal and Bangladesh, as we share the basins of Ganga and Brahmaputra with them.

With the former, India is already at crossroads for the Mahakali River, and with the latter for the Teesta River.

After all this trouble, one must ask the question of The River Interlinking Project: A Solution for India’s Water Crisis?

NITI Aayog claims that India is facing its “worst” water crisis in history. The solution to this is River Interlinking, where India’s abundant yet scarcely used resource is utilized: Water.

The state of Maharashtra has the most concentration of dams and storage facilities and yet it is the least irrigated of all. A survey conducted recently checked the validity of irrigation projects designed between 1955 and 1990. Out of the promised 1 lakh hectares, only 55 thousand were irrigated at a larger cost than what was initially promised. Before the implementation of a project of this magnitude, alternative and sustainable options should be considered. Groundwater recharge, water harvesting, and watershed development are more localized and direct solutions for India’s water problem.