M Karunanidhi’s meteoric rise in the world of politics was a result of his tireless hard work during the early days of his party’s formation and there after a constant struggle. 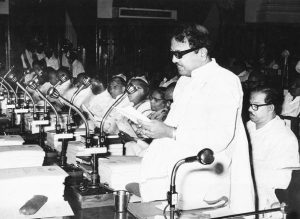 M uthuvel Karunanidhi (MK) was born on June 3, 1924, to a peasant couple as their only male heir. Originally he was christened as Dakshinamurthy, but later changed his name to a common Sanskritised name in Tamil as Karunanidhi. Once it was criticised that he attempted to re-change his name with a gazette notification as pure Tamil version of ‘Arutchelvan’ which means compassionate person. But DMK leaders hindered him from doing so; because it was difficult to popularise the new name.

His meteoric rise in the party was possible through his tireless hard work. He travelled along with C N Annadurai, across the state to collect funds and mass support for the party. They used to travel by any available modes of transport. Karunanidhi became a confidant of Annadurai by his hard work and oratory skills. He did not join the party on the very day it was launched at Robinson Park of Royapuram, Chennai in the year of 1949. He was with ‘Periyar’ EVR with a dilemma. He relinquished his post in the magazine run by EVR and got his curse for abandoning him in a time of crisis. However, his association with other breakaway leaders including EVR’s step son EVK Sampath forced him to join the DMK.

Karunanidhi became famous in the tinsel world since 1949-50 with the success of a few flicks starring MGR in the lead role. Tamil celluloid’s first social winner, ‘Parashakthi’ was hailed for MK’s fierce dialogues in condemning social evils of the era. Incidentally, it was the first ever release of ‘Sivaji Ganesan’, who later had a brief stint in the party. 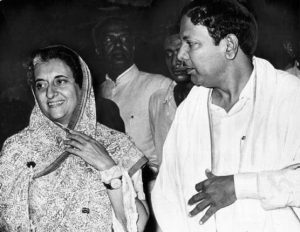 In fact, MK plunged into politics at the age of 14 while he gathered fellows of his age and arranged a procession against the imposition of Hindi in his native Thiruvarur in 1937-38. Later, during the second anti-Hindi agitation of 1965, the DMK captured the opportunity to challenge the ruling Congress which had been in power since 1946. While the split with the Dravidar Kazhagam took place, the DMK also boycotted elections and voiced for separation of Tamil Nadu from the Union of India. They were even suggesting composition of five southern states as a single entity. However, at a conference held in Trichy in the year of 1956, it was decided to enter into poll pray. In the following state legislative elections, the party won 15 seats and Karunanidhi won from Kulithalalai constituency. Since then, he has never lost an election and celebrated his golden jubilee commemoration in the assembly in 2017.

In the 1962 election, the DMK won 50 seats and subsequently captured power in 1967. Karunanidhi became minister of PWD in the cabinet. Following the sudden demise of C N Annadurai, he was elected to the Chief Minister (CM) post defeating V R Nedunchezian, (elder brother of veteran parliamentarian Era Chezian) who was expected to take over the reign.

“Initially he had a good rapport with every leader; however, problems started surfacing within the ranks once MK alleged that he was nurturing his first son M K Muthu to sideline MGR.”

The party split on the lines of two personalities who worked against each others’ interest. In the meantime, at the national level, both the INC and CPI were split and the political climate in the country was highly charged. Indira Gandhi, who took over the PM post, was at the hot seat to prove her popularity to other veterans including her mentor Kamaraj who helped her grab the PM post.

Indira called for a snap poll and entered into an alliance with DMK which in fact supported her government in the parliament following the split in the Congress. In the 1971 election, the alliance emerged victorious and the state also went for simultaneous polls. Karunanidhi became the CM for the second time. But this time, the earlier problems became more evident and subsequently MGR was expelled from the party. Interestingly, MGR, who had cadre support, could not muster enough support among senior colleagues. 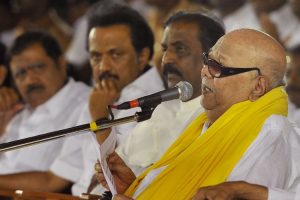 In due course of time, Karunanidhi picked up a quarrel with Indira Gandhi and was charged for corruption by MGR. While Indira, unable to control the opposition and a judgement of Allahabad Court, declared emergency on June 25, 1975, Karunanidhi opposed the move and subsequently got dismissed from the power on January 30, 1976. His political wilderness started from that date and almost continued till MGR took his last breath. Karunanidhi joined the Janata regime for two years, with the new anti-Indira dispensation. When the 1980 Lok Sabha poll called for Karunanidhi, nuancing the public mood moving towards Indira, he quickly acted to grab the opportunity. He rather exploited the opportunity as it might have gone to MGR’s party. Because MGR’s AIADMK was the first Dravidian party to join in a central cabinet while they joined with the Charan Singh government, supported by the Congress. Indira was against MGR since he did not come forward to support her candidature to a by-poll in Tanjavore. The alliance secured a thumping victory and AIADMK was able to get just two seats. After assuming power, Indira dismissed the MGR regime in 1980.

Karunanidhi went to Delhi to strike an electoral deal with the Congress, but the Congress made a condition that there should be equal treatment between the partners. The national party claimed for 50 per cent of the assembly seats. Without any other option, Karunanidhi agreed and signed the deal. While returning, party colleagues strongly expressed their displeasure over the deal, Karunanidhi softly told them that he did not disclose the constituencies in which the national party would be suggested to contest. This cat and mouse game did not materialise among the masses and the alliance lost the poll.

“Karunanidhi’s consoling victory against the MGR regime was received through the civic body elections held in 1986, where the DMK won in a majority of Municipalities. In the next year, MGR died and the government fell in the aftermath of a split. Karunanidhi was able to reach the reign inJanuary 1989 with a thumping majority.”

It did not last long. Both factions of AIADMK merged and DMK met a humiliating defeat in 1989 Lok Sabha elections where the former had an alliance with the Congress led by Rajiv Gandhi. However, DMK joined in a first ever central regime under the V P Singh cabinet. Karunanidhi’s nephew and well known DMK leader ‘Murasoli’ Maran became a cabinet minister. Following the fall of V P Singh’s government, the DMK had a huge setback as Rajiv’s assassination fell on their shoulders. Jayalalithaa became the CM and Karunanidhi resigned his legislative post since he alone had to attend the assembly.

Jayalalithaa’s fortunes were not much stronger and public anger against her reflected in the 1996 assembly poll. Karunanidhi tactically used the split in the state congress party as the central command wished to enter into an electoral alliance with the AIADMK without hindering to the voices of cadres who opposed such a move. Prominent leader of TN Congress G K Moopanar created a party and allied with the DMK. The alliance, as expected, won by a landslide where Jayalalithaa herself lost the seat.

“His enormous victory did not last long. After two years, DMK had to once again face difficult times. It was under the suspicion that it had a role in the assassination of Rajiv Gandhi. Congress, which was supporting the United Front government, withdrew citing the party’s alleged involvement as its reason.”

In the ensuing election his rival, Jayalalithaa, managed to combine a few small parties and the controversial BJP. During the poll, a bomb blast in revenge for Babri-Masjid demolition targeting L K Advani, a senior leader, rocked Coimbatore city. This turned the tide against the party which saw a reversal of its fortune. Fortunately Jayalalithaa’s exit from the government which could not survive the confidence vote, toppled. During the vote on confidence, DMK switched over to the ruling side and voted in support of it.

In the ensuing election unexpectedly the party allied with the ideologically opposite ‘saffron’ party and impressively won seats with the help of Kargil War euphoria. DMK sailed through the alliance till the fag of the term and switched over to ally with the UPA, citing the Gujarat riots as the reason for quitting the coalition. As expected, UPA won the reign and DMK enjoyed the clout as the alliance swept over all the 39 seats. This alliance repeated their performance once again in 2009 and DMK won 18 seats. However, in 2011 Jayalalithaa managed to come back and once again retained power in 2016.

To England, With Love