India celebrates 75 years of Independence on 15 August 2022. On this momentous occasion, India’s 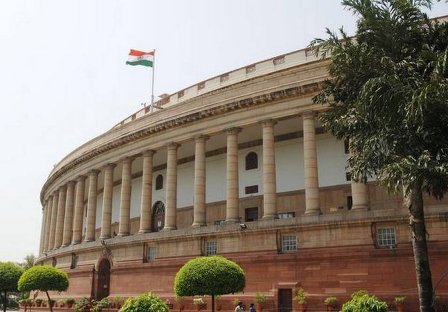 national Flag, Tiranga – the tricolour – stands out as the most visible manifestation of our democratic polity. There has been a significant journey in the evolution of Tiranga, representing the hopes and aspirations of the people of India. It started with Sister Nivedita, an Irish disciple of Swami Vivekananda, in 1904.

The first national Flag was hoisted on 7 August 1906 in Parsee Bagan Square (Green Park, Calcutta). It was composed of three horizontal strips of red, yellow and green with Vande Mataram written in the middle. The red strip on the Flag had a sun and a crescent moon, and the green ribbon had eight half-open lotuses. Madam Bhikaji Cama unfurled the first version of the Indian National Flag – a tricolour of green, saffron, and red strips at the International Socialist Congress held at Stuttgart, Germany, in 1907.

Lokmanya Bal Gangadhar Tilak and Dr. Annie Besant hoisted the third Flag during the Home rule movement. This Flag had five red and four green horizontal strips arranged alternately with seven stars in the Saptagiri configuration. One corner of the Flag had a star and crescent and on the other corner of the Flag was the Union Jack (at the pole end)

The origin of the Indian Flag in its present format was designed by Shri Pingali Venkayya, an Andhra youth who presented this to Mahatma Gandhi at the All India Congress session at Bezwada (now Vijayawada) in 1921. Shri Pingali Venkayya was an Indian Freedom Fighter and a staunch follower of Mahatma Gandhi. This Flag consisted of the colours associated with the two principal religions, red for the Hindus and green for Muslims (This Flag was based on the Swaraj flag). Gandhiji modified the Flag by adding a white strip representing the remaining religious communities in India. Hence the tricolour with the spinning wheel on the white background was ‘unofficially’ adopted at AICC Bezawada Conference in 1921. This was the origin of ‘Tiranga’/Tricolour.

The Flag adopted by Congress in 1921, AICC Session came to be associated with nationhood for India, and it was officially recognized at the AICC session held in Karachi in August 1931.

A resolution has adopted that tricolour as India’s National Flag. At the same time, the current arrangement of stripes and the use of deep saffron instead of red were approved. New attributes were associated with saffron and white and green stripes to avert any communal or sectarian associations or interpretations of the original proposal. These were Saffron for courage and sacrifice, White for peace and truth and Green for faith and chivalry.

Adoption of the Indian National Flag

The Watershed moment came on 22 July 1947 when a resolution moved by Pandit Jawaharlal Nehru, the National Flag of India, was adopted in its present form by the Constituent Assembly. The spinning wheel in the Flag’s centre was replaced by a blue chakra- the dharma chakra. It would be of great interest to note views expressed by Pandit Jawaharlal Nehru while moving the resolution. Relevant extracts from Constituent Assembly debates dated 22 July 1947 are as under:

“Resolved that the National Flag of India shall be horizontal tricolour of deep Saffron (Kesari), white and dark green in equal proportion. In the centre of the white band, there shall be a Wheel in navy blue to represent the Charkha. The design of the Wheel shall be that of the Wheel. (Chakra) which appears on the abacus of the Sarnath, Lion Capital of Asoka. The Wheel’s diameter shall approximate the white band’s width. The ratio of the width to the length of the Flag shall ordinarily be 2:3.”

So, when I move this Resolution, I think of this concentrated history through which all of us have passed during the last quarter of a century. Memories crowd upon me. I remember the ups and downs of this great nation’s great struggle for freedom. I remember, and many in this House will remember, how we looked up to this Flag not only with pride and enthusiasm but with tingling in our veins; also how; when we were sometimes down and out, then again, the sight of this Flag gave us the courage to go on.

This Resolution defines the Flag, which I trust you will adopt. In a sense, this Flag was adopted, not by a formal resolution, but by popular acclaim and usage, adopted much more by the sacrifice surrounding it in the past few decades. We are, in a sense, only ratifying that popular adoption. It is a flag which has been variously described. * * * *

I may say that when this Flag was devised, there was no communal significance attached to it. We thought of a beautiful design for a Flag because the symbol of a nation must be beautiful to look at. We thought of a Flag which would, in its combination and its separate parts, somehow represent the spirit of the nation, the tradition of the nation, that mixed spirit and tradition which has grown up through thousands of years in India. So, we devised this Flag.

It will be seen that there is a slight variation from the one many of us have used during these past years. The colours are the same, deep saffron, white and dark green.

In the white previously, there was the Charkha which symbolized the common man in India, the masses of the people, and their industry and came to us from the message Mahatma Gandhi delivered. (Cheers) * *

Now, the Charkha, as it appeared previously on this Flag, had the Wheel on one side and the spindle on the other if you see the other side of the Flag, the spindle comes the other way, and the Wheel comes this way; if it does not do so, it is not proportionate, because the Wheel must be towards the pole, not towards the end of the Flag. ‘there was this practical difficulty.

Therefore, after considerable thought, we were, of course, convinced that this great symbol which had enthused people should continue * * * So, the old tradition continues in regard to the Charkha and the Wheel. But what type of Wheel should we have? Our minds went back to many wheels, but notably, one famous Wheel, which had appeared in many places and all of us have seen, the one at the top of the capital of the Asoka column and in many other places. That Wheel is a symbol of India’s ancient culture; it is a symbol of the many things that India had stood for through the ages. So we thought that this Chakra emblem should be there and that Wheel should appear.

For my part, I am exceedingly happy that, in this sense, indirectly, we have associated with this Flag of our not only this emblem but, in a sense, the name of Asoka, one of the most magnificent names not only in India’s history but in world history.* * *. It was a period when India’s ambassadors went abroad to far countries, not in the way of an Empire and imperialism but as ambassadors of peace, culture and goodwill. (Cheers.) * * * this Flag * * * wherever it may go, it will bring a message, I hope, * * *. (Hear, hear)

That I hope will be the message of this Flag…

It is stated in this Resolution that the ratio of the width to the length of the Flag shall ordinarily be 2:3.* * * * .

But generally speaking, the ratio of 2:3 is a proper ratio. Sometimes the ratio of 2:1 may be suitable for a Flag flying on a building. Whatever the ratio may be, the point is not so much the relative length and breadth but the essential design. So, Sir, now I would present to you not only the Resolution but the Flag itself.

There are two of these National Flags before you. One is on silk-the one I am holding, and the other on the side is of cotton Khadi.

I beg to move this Resolution. (Cheers)

Mr. President: I have not noticed three amendments to this Resolution.

Mr. President: I would ask Members to express their assent to the Resolution which has been placed before them and show their respect to the Flag by getting up and standing in their places for half a minute.

The motion was adopted, the whole Assembly standing.

After that Pandit Jawahar Lal Nehru proposed Sir, may I respectfully suggest that the two Flags which have been displayed this morning may be specially preserved and subsequently deposited in the National Museum (Applause). Mr. President: I accept that suggestion.

An Honourable Member: I request you on behalf of the House to convey our homage to Mahatma Gandhi and tell him that we are observing the day very magnificently.”

Mr. President: I will do that with the greatest pleasure.

The principles of Truth or Satya, Dharma or Virtue, ought to be the controlling principle of those who work under the Flag.

The writer is a regular correspondent of “The Parliamentarian” CPA, London and presently Secretary to the Leader of Opposition, RS; formerly Joint Secretary ( Legislation) and Consultant, LS Secretariat, Parliament of India

First ‘Made in India’ Cervical Cancer Vaccine in the Offing