UN Calls for Concrete Measures to Support an Ageing World

The World Social Report 2023 provides world leaders with information and policy guidance to chart a path forward and renew commitments at the upcoming SDG Summit in September 2023.

The number of people aged 65 years or older worldwide is projected to double, rising from 761 million 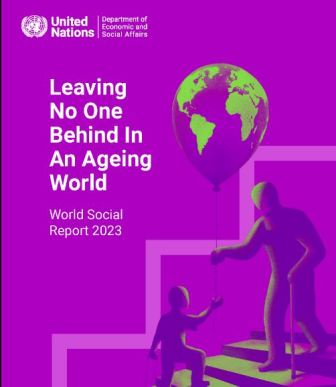 in 2021 to 1.6 billion in 2050. As the world continues to address multiple crises, including the rising cost of living, the rights and well-being of older persons must be at the centre of collective efforts to achieve a sustainable future, according to the World Social Report 2023.

The World Social Report: Leaving no one behind in an ageing world states that population ageing is a defining global trend of our time. Globally, a baby born in 2021 could expect to live, on average, almost 25 years more than a newborn from 1950, reaching 71 years, with women outliving men by an average of five years. Northern Africa, Western Asia and sub-Saharan Africa are expected to experience the fastest growth in the number of older people over the next three decades, while Europe and Northern America combined now have the highest share of older persons. According to the report, improvements in health and medical therapies, greater access to education and reductions in fertility have driven this transformation.

“Together, we can address today’s inequalities for the benefit of tomorrow’s generations, managing the challenges and capitalizing on the opportunities that population ageing brings,” said Mr. Li Junhua, United Nations Under-Secretary-General for Economic and Social Affairs.

Only some have benefited equally from the improvements in health and education that have driven population ageing. While many older persons are in excellent health or economically active, others live with ailments or are in poverty. In more developed regions, public transfer systems, including pensions and health care, provide over two-thirds of the consumption by older persons. However, older persons tend to work longer in less developed areas and rely more on accumulated assets or family assistance. Additionally, more than public spending in most countries is needed to cover the growing demand for long-term care.

The report shows that life expectancy is strongly influenced by income, education, gender, ethnicity and place of residence, among many other factors. Some combinations of these factors have too often led to the systemic disadvantage that begins early in life.

Without policies to prevent them, systemic disadvantages reinforce one another throughout peoples’ lives, leading to gaping disparities at older ages, with dire consequences for progress towards the Sustainable Development Goals, including SDG 10 on Reducing Inequalities.

This demographic shift must be met with a rethink of long-held policies and practices associated with livelihoods and work. In his report on Our Common Agenda, UN Secretary-General António Guterres called for long-term initiatives that promote access to quality education, health care and decent job throughout the life course for all.

Many countries are already introducing opportunities for life-long learning, strengthening and taking full advantage of intergenerational workforces, and introducing flexible retirement ages to accommodate a broad range of personal situations and preferences.

Rethinking social protection systems, including pension schemes, is necessary. One major challenge is maintaining the fiscal sustainability of public pension systems while ensuring income security for all older persons, including workers in informal employment.

Expanding decent work opportunities for women and other groups traditionally excluded from the formal labour market while also recognizing the considerable contribution of the largely informal care sector to the formal economy are additional crucial elements to ensure sustainable and inclusive economic growth in an ageing world.

The World Social Report 2023, published by the UN Department of Economic and Social Affairs, including its analysis and review of policy options to address population ageing, is intended to provide world leaders with information and policy guidance as they chart a path forward and renew commitments to achieving the SDGs at the upcoming SDG Summit in September 2023.

How you can outline a Coursework Writing Service