Policymakers should keep three things in mind while making policies to address inequality, such as promoting opportunities, facilitating empowerment, and enhancing security.

The income profile of people is vital to understanding their degree of inequality. The report’s 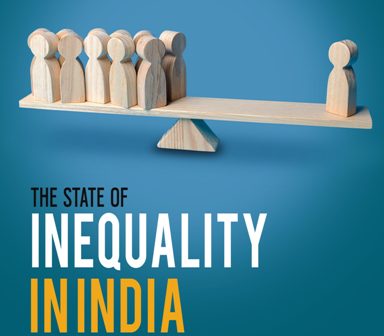 findings “The State of Inequality in India” have called for a multidimensional approach to understanding inequality. Sharing the major highlights in the report, Ms. Jessica Duggal, Institute for Competitiveness (IFC), mentioned that inequality is a relative term, whereas inequity is understood as an absolute term. Inequity can be measured and quantified. Hence, the solution to inequality is equity. She added that the equitable distribution of resources to curb inequality is a central thrust to address the concern.

According to the Annual Report of the Periodic Labour Force Survey (PLFS) 2019–20, the top 1 per cent earns almost thrice as much as the bottom 10 per cent. The rate of women’s labour force participation is low compared to men, but it has increased dramatically in recent years. India has remarkably improved its health infrastructure. Deep penetration of health services in rural India has brought a decline in infant and neonatal mortality rates. However, the affordability of the services is a major concern. Over the past few years, expenditures on health services have constantly increased.

Once people are short of money, they will fall back into a financial trap, increasing their vulnerability. Hence, there is a need to make health services, insurance, and other financial services affordable.

In the education sector, there has been infrastructure improvement. At the same time, approximate 90 per cent of schools have washrooms and drinking water facilities, and an approximate 80 per cent of anganwadies have tap water facilities. This has helped in increasing the retention rate in schools. However, the dropout rate is considerably high at the higher secondary levels.

The report further shows that there has been considerable improvement in access to toilets, drinking water and electricity at the household level. India is now 100 per cent open defecation free (ODF). Haryana and Telangana have achieved 100 per cent coverage of tap water facilities. Based on the report’s findings, a few recommendations have been made, which can certainly be able to reduce the inequality in India.

Speaking at the report release, Dr. Bibek Debroy, Chairman of the Economic Advisory Council to the Prime Minister of India (EAC-PM), was slightly sceptical over the recommendations made to reduce inequality in India. He stated that the type of data used and the approach to measure poverty and inequality are critical methodological concerns. India never had comprehensive data and will never have data to measure inequality. Data on expenditure on consumption and spending should be available for measuring inequality. Unfortunately, expenditure and consumption data are not available after 2011–12. In the absence of data on expenditure and consumption, and clear articulation of the poverty line, it is challenging to address inequality adequately. During the COVID pandemic phase, people went through their worst period of life. Hence, the timing of the data used in the report is crucial. Many people belonging to the Above Poverty Line (APL) might have fallen to the Below Poverty Line (BPL). Hence, if growth recovers and touches 7–7.5 per cent, then the poverty level might drop to 10 per cent in India.

Dr Poonam Gupta, Director General, National Council of Applied Economic Research (NCAER), New Delhi, and member EAC-PM, shared that apart from consumption and expenditure, other variables should also be looked upon, such as gender, regional, skills, and groups to measure inequality. Expenditure and consumption require a lot of data to establish inequality, whereas variables like gender, skills, and age do not require much data. Many factors push out women from the formal workforce, such as culture, family issues, mobility, security, etc. Society is unable to take total leverage of the women population. If we can use women’s workforce sufficiently, then the country’s productivity and growth will increase. It is also important to know the people’s consumption and income distribution behaviour. Gupta further stressed that it is also crucial to see the government’s role in providing health care facilities and services during difficult times. The sections of the people, who otherwise would have been in BPL, should be studied.

Prof. Suresh Babu, Indian Institute of Technology (IIT)-Madras, mentioned that the whole approach to measuring inequality through a multidimensional perspective is recent. It has got several advantages. It tries to address the number of variables trying to influence inequality, which helps policymakers develop policies that affect it. It also helps to identify consistently poor groups. The policymaker should keep three things in mind while making policies to address inequality, such as promoting opportunities, facilitating empowerment, and enhancing security. However, they should prioritise social insurance schemes, social assistance schemes, micro area-based insurance schemes, comprehensive development schemes, child protection schemes, and crop-based protection schemes.

Charan Singh, CEO of EGROW Foundation, said that estimating poverty is a big challenge and estimating inequality is a much more significant challenge. In addition to capturing materialistic things in understanding poverty and inequality, we should also charge value-based things to understand whether people are happy or not in their current situation.

The writer is a development sector professional based in Ranchi, Jharkhand. He can be reached on Twitter