In his passing, the country has lost not only one of its most distinguished scientists but also an enthusiastic spokesperson for science.

Professor Mamannamana Vijayan, an eminent molecular biophysicist who made significant 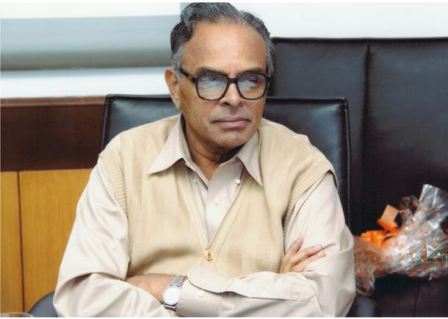 contributions to the study of amino acids, proteins, and macromolecules, passed away on April 24, 2022. He had over five decades of association with the Molecular Biophysics Unit at the Indian Institute of Science (IISc), Bengaluru. He served in various capacities such as Professor, Chairman of Molecular Biophysics Unit, Chairman of Division of Biological Sciences, and Associate Director, IISc.

In his passing, the country has lost not only one of its most distinguished scientists but also an enthusiastic spokesperson for science. In his remarkably productive career that spanned over five decades, Vijayan was a researcher, a teacher, and an administrator who influenced his surroundings.

Vijayan was born in Cherpu, Thrissur, in 1941. A piece of sage advice from Achutha Menon, the then-future Chief Minister of Kerala, that a good student should not be wasted on local politics led politically inclined Vijayan to Allahabad University in 1961 for a master’s degree after graduating from Sree Kerala Varma College.

InIISc, he was mentored in the emerging field of X-ray crystallography by M. A. Viswamitra and influenced by the Head of the Physics department, R. S. Krishnan, who had succeeded C. V. Raman.

“It was in IISc that I met Vijayan for the first time, almost half a century ago,” recollects Prof P.Balaram, an eminent Indian biochemist and a former director of the IISc. “At IIScVijayan found his scientific calling and his future wife, Kalyani, a fellow student in the crystallography laboratory,” adds Prof Balaram.

From 1968 to 71, Vijayan was a post-doctoral fellow in Prof Dorothy Hodgkin’s research group at the University of Oxford, a celebrated crystallographer, and a Nobel Prize winner of 1964 for her classic structure determinations of cholesterol, penicillin, and Vitamin B-12. During that period, he studied x-ray diffraction data of insulin crystals. He played a prominent role as part of Dorothy Hodgkin’s team in unravelling the structure of insulin in 1969.

After completing his post-doctoral research at the University of Oxford, he returned to India in 1971, initially appointed in the Physics department but soon to move, in 1974, to G. N. Ramachandran’s newly formed Molecular Biophysics Unit (MBU) at IISc.

In 1971, resource constraints were a hurdle in the immediate initiation of macromolecular crystallography, Vijayan initiated a programme involving the preparation and X-ray analysis of crystalline complexes of amino acids and peptides, with the original objective of elucidating, at the atomic resolution, the interactions significant in the structure, assembly, and function of proteins said Prof Balaram.

“One of the early grants that we got was a project to determine the crystal structures of proline peptides from the Indian National Science Academy (INSA). Vijayan and I were co-investigators, receiving a grant of Rs 10,000, which we shared to the last rupee,” remembers Prof Balaram.

Prof Vijayan’s initial programme was found to have implications for chemical evolution and the origin of life. He then studied the structure and interactions of non-steroidal anti-inflammatory analgesics and performed small-molecule crystallography on ionophores and related compounds. In the early eighties, one of his primary concerns was developing biological macromolecular crystallography in India.

Vijayanstarted with lectins, which specifically bind to cell surface carbohydrates. He determined the de novo structure of the tetrameric peanut lectin and jacalin of jackfruit seeds specific to the tumour associated T-antigens. In peanut lectin, his group also demonstrated the importance of water in carbohydrate binding, including the generation of specificity. He also studied other lectins from garlic, snake gourd and banana.

His work received international attention and proved to be a significant landmark in developing structural biology in India. The students who cut their teeth on these protein structures began to spread out to many other centres in India. The importance of structural biology grew, and the instrumentation for crystallography became accessible to many national laboratories and academic institutions.

Prof Vijayan also played roles in science reforms like “The choice-based credit semester was implemented by the government of 2006-2011 in Kerala” based on the report filed by an expert panel.

Prof TP Singh, an eminent Crystallographer of India and a close associate of Prof Vijayan remembers him as an internationally acclaimed structural biologist. The latter inspired many scientists and guided them through the intricate procedures.

“I had the opportunity to witness how prudently he went about tackling some burning issues at the global Inter-Academy meeting in Japan, where I worked with him as the Vice President. I had the fortune of being his first PhD student and was lucky to get his impactful guidance throughout my career,” says Prof Singh.

Leading structural biologist Prof Avadhesha Surolia considers Prof.Vijayan to be the most outstanding crystallographer that India has produced. “We began our scientific collaboration in 1978 that established the discipline of macromolecular crystallography on proteins as it stands in India today. This epic collaboration lasting 44 years trained countless structural biologists, leading to establishing numerous crystallographic centres throughout India, which would not have been possible without his outstanding leadership and exemplary commitment to science in the country,” Prof Surolia recollects. He recalls Prof Vijayanas as exceptionally intense yet warm and generous, the one who looked after the welfare of everyone around him.

“After the Government of India established the Department of Science and Technology, Vijayan was the first to write a grant application to establish a facility for macromolecular crystallographic research in the country,” recallsProf M. R. N. Murthy.

“Although he was not religious, his deep commitment to the welfare of others gave an impression of his inner spirituality. He and his crystallographer wife, Dr. KalyaniVijayan kept their house door open to students, collaborators, and innumerable international friends,” Prof Murthyelucidates.

If India has become internationally competitive in macromolecular crystallography today, it is to a substantial extent, due to Prof Vijayan’s efforts. With the passing away of Prof Vijayan, India has lost a celebrated scientist who grew India’s scientific calibre through his relentless efforts. While it is difficult to reconcile the loss of a scientific visionary of Vijayan’s calibre, his monumental contribution to science and society will be cherished and adored by one and all.

His autobiography titled ‘A Life among Men, Women and Molecules’ has been published by the Indian National Science Academy. (India Science Wire)