Understanding the Many Variants of Coronavirus

At present there are thousands of Covid-19 variants circulating all over the world. Mutation in viruses 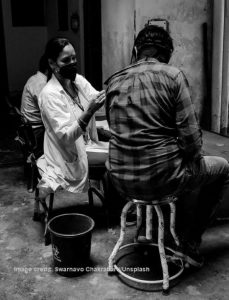 happens all the time. These mutations or changes mostly harm the virus itself and remain inconsequential. But a select few mutations help the virus survive and spread better. The Covid-19 (SARS-CoV-2) has had an unprecedented spread throughout the world which has helped it create more variants. High circulation causes it to replicate fast and make more changes to penetrate and infect human cells better. In the last few months, many variants of Covid-19 were found in the Indian population, giving stimulus to the country’s deadly second wave.

Also Read : Why It is Not Okay to Call It the Indian Variant

Variant found in the UK or Kent (B.1.1.7): This variant emerged in September 2020 in England and has since spread to more than 50 countries with over 200,000 identified cases.

Variant found in Brazil (P.1): This variant first emerged in the Amazon city of Manaus in December and has spread to 10+ countries.

Some research suggests that the UK originated variant is 70% more infectious, while Public Health England suggests an estimated danger of around 30% to 50%. Yet it remains the most contagious form of coronavirus. It has been rampant in the UK and Europe. Three-quarters of coronavirus cases in the USA are due to this variant.

It was also noted that the Indian found variant (B.1.617) could be more transmissible (50% faster) with a higher rate of evading antibodies. If this variant could spread 50% faster, it would be 225% more transmissible than the original coronavirus. But WHO says, there is not enough data to suggest the variant’s impact on vaccine effectiveness or its spread. The Health Minister of Singapore, Ong Ye Kung, has said that B.1.617 affects children the most. Again, no study proves or disproves it firmly.

The variant found in India has been rampant in its spread. Many experts believe this variant is the reason behind the second wave of Covid infections in India. It is also the instigator of cases in Nepal, the UK, the USA along with 40 more countries. The B.1.617 variant was first observed in the Vidarbha region of Maharashtra. It quickly caught attention for its quick speed of spreading and the possibility of avoiding immune response. Surprisingly, this variant was not the reason behind the surge of cases observed in Mumbai. Experts suggest train reopening along with other lapses to be the reason behind Mumbai’s high cases.

In the northern parts of India, the UK originated variant is rampant. The rising cases in both Punjab and Haryana are due to the B.1.1.7 variant. A study claims that 80% of all Covid cases in Punjab are due to the variant found in the UK. Delhi too observes a large number of B.1.1.7 infected cases. But being the capital, it has observed over 100 variants in its population, many of which are not harmful. In Kerala, the N440K variant is observed. But ironically, the places with this variant notes the least number of cases than the places where this variant is absent.

Also Read : Who Should or Shouldn’t Take the COVID-19 Vaccine?

In some lab tests, the vaccination couldn’t neutralize the newer variants of the virus as effectively as it could for the original virus (SARS-CoV-2).

One study estimates that the antibodies would be 80% less potent for the newer mutations. Few observed instances in New Delhi noted Covishield vaccinated health-care workers getting reinfected due to the Indian originated variant. In the case of the B.1.617.1 variant, research shows that antibodies generated by current vaccines are seven times less effective but they are still able to neutralize the threat to some extent. Early data provided on this variant mention that B.1.617.1 can evade antibodies, particularly bamlani­vimab.

Even though the current vaccines have a drop in effectively eliminating the virus, it does help the cases to go from bad to worse. Data from Qatar suggests that the Pfizer vaccine works well against the new variants of coronavirus. Full vaccination offered 75% efficiency against the variant found in South Africa, a drop from 95% efficiency from the original virus. South Africa observed 85% protection against hospitalization and deaths with just one dose of Johnson and Johnson vaccine. Israel noted 97% protection after taking two doses of Pfizer against the contagious variant found in the UK.

Seeing the drop in efficiency, Moderna has begun tests for boosting its vaccine’s efficiency. In its initial results it noticed that three doses of the original vaccine was not as effective in treating the newer variants, specifically the variant originated in South Africa. On the contrary it notes that the B.1.351-specific vaccine was more reliable. The solution now is to increase the vaccination drive as the current vaccines do help the cases to not get severe. Further, as more research is put there would be more capable and targeted vaccines available that could cure specific mutations.

The History of Israel and Palestine