Does India at all need a uniform law to ensure harmony of personal laws across the theological spectrum? Or is the idea of the Uniform Civil Code in itself perverse to the concept of religious freedom articulated under Article 25 and Article 26? 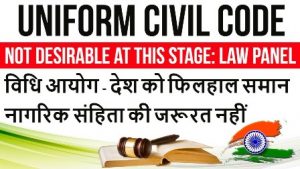 W hile the Uniform Civil Code has time and again been a point of debate amongst jurists and lawmakers, a latest addition to this rhetoric has been a Consultation Paper presented by the Law Commission on ‘Reform of Family Law’ (August 31, 2018) wherein, presenting its stance on the issue, the Law Commission has categorically stated that resolution of conflict does not mean abolition of difference.

It further goes on to establish its view and states that a Uniform Civil Code is neither necessary nor desirable and rather the existence of a conflict is depictive of our robust democracy.

“This paper urges the legislature to legislate upon the parochial, discriminatory laws and prevailing ambiguity within the individual codes rather than target the disparity between different family laws.”

Article 44 of the Constitution of India reads: ‘The State shall endeavor to secure for citizens a uniform civil code throughout the territory of India’. This Article which envisages the setting up of a Uniform Civil Code has been recited as a longstanding will of the Constitution drafters and evidently has found its place as a Directive Principle of State Policy (DPSPs). However, even after 68 years of existence of this Article and a plethora of debates over it, the Code still seems like a far cry.

“A major bone of contention that prevails amidst this scenario is an ambiguity as to what the Code per se encompasses. A broad definition that is often widely understood is that the uniform civil code shall be a ‘one country one law’ solution for all the religious factions in order to do away with the disparity or inequality related to religious practices and customs.”

It thereby envisions a common law to govern all citizens in a number of fields, including marriage, inheritance, divorce, adoption, and maintenance.

An interesting point that one is compelled to note here is that this Article falls under the category of DPSPs which makes its very practice merely a principle or guideline to be taken care of by the State while framing laws and policies. This brings to fore another argument which has largely been missed by both the factions: Was the intention of the lawmakers to secure the establishment of a Code as a law in itself or was it merely to incorporate a policy of uniformity and non-discrimination within the ambit of governance and law-making?

Notably, this placement of the Article amongst DPSPs in itself is a result of the disagreement amongst legislators drafting the Constitution. This Article was initially proposed to be a part of Article 35 of the Draft Constitution. However, it was subjected to strong opposition, especially by Muslim fundamentalists like Mohammad Ismail and Nazir Ahmad who argued that ‘the very concept of uniform civil code clashed with the religious and cultural freedom guaranteed to every citizen’.

“It was then that the provision was placed under Article 44 as a Directive Principle with an assurance from B.R. Ambedkar that even if the Uniform Civil Code was implemented, it would be applicable only to those who would consent to be governed by it.”

While the stance of the legislature has been rather divided on its implementation, the courts have emphatically pressed for a concrete code to alleviate the dilemma that they have to face in deciding upon matters pertaining to family laws. In the Shah Bano Case (Mohd. Ahmed Khan v. Shah Bano Begum (1985)), the Apex court strongly criticised the Government of India for its sheer inability to enact a Uniform Civil Code. Further, Chief Justice Khare in the Sarla Mudgal v. Union of India (1995) Judgment, while highlighting the need for a Code, stated that a common civil code would help in national integration by removing disparate loyalties of laws which came in as a result of conflicting ideologies.

However, a question that crops up is whether a nation like India which is recognised worldwide for its diversity, is in reality, so intolerant of its differences that only a common law can sustain its religious harmony?

A more critical issue pertains to  where the line must be drawn such that the Code, if brought into existence, does not supersede the religious freedom and its manifestation guaranteed under Article 25 and how does one strike a balance with the existing family laws for certain states as specified in Schedule VI?

Does that mean that the Article in itself is repugnant to the freedom guaranteed under Article 25? Perhaps not! The answer is in a more pragmatic and harmonious construction of this provision with respect to the ideals of individual dignity.

The need is for policies and laws to reflect the spirit behind the Article which is to alleviate the discrimination against women and to do away with practices stemming from regressive notions.

“Be it the latest Triple Talaq judgment (Shayara Bano v. Union of India (2016)) or the Sabarimala issue (Indian Young Lawyers Association v. State of Kerala (2006)), all have shown the way forward in application of this Article in its spirit which is what the legislators need to build upon in times to come.”

What we need to realise is that with changing times, the law needs to embrace the changing needs of the society. As a country, we have come a long way from the post Partition, fragmented princely states set-up to an integrated whole. No longer do we need a uniform law to build upon the notion of integration. Hence, reading this provision in harmony with its changed timeline shall be the best solution for legislators rather than strictly adhering to the letter of the law or leaving the entire mantle on the judiciary. As has been most articulately summarised by the Law Commission – ‘It is discrimination and not difference which lies at the root of inequality’.