The Code on Social Security 2020 must also guarantee universality and equity of social protection to all workers, which can be realised through a National Social Protection Floor constituted in line with the ILO’s Recommendation 202 (2012). 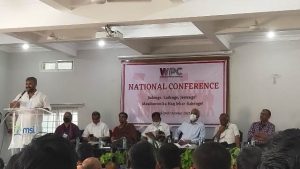 More than 150 delegates representing various organisations working with unorganised sector workers identified key areas of intervention including extending benefits through the e-Shram portal which are at par with benefits accruing to formal workers, implementing a universal social protection floor, extending Employees’ State Insurance Scheme without exclusionary standards, revising housing policies to accommodate the basic need for affordable workers’ housing, and to strengthen and restore democratic processes on labour law reforms and labour administration. The delegates passed the resolution of demands of the unorganised workers of India, which makes the agenda of the WPC.

Shri. Devendra Reddy, Chairman of the newly constituted Telangana Unorganised Social Security Board, who was the Chief Guest at the opening ceremony, expressed his dissatisfaction with the glacial pace with which the government was responding to informal sector’s concerns. He pointed out, “we have not been able to accomplish much. Even with the e-Shram portal now being implemented, we have to take it a step further and extend it to social security schemes. But I assure you our new social security board vows stand with the workers firmly.”

Representatives of organisations, institutions and various networks such as the Indian Federation of App Based Transport Workers, Migrant Assistance and Information Network (MAIN), Vigyan Foundation, Lucknow, etc., attended the conference.

“On this day, the WPC stands as a collective voice of informal workers in this country who are demanding social justice and dignity. We will persevere with unflinching commitment to the ideals of this Sovereign, Socialist, Secular, Democratic Republic. We are the united front of the historically marginalised but inevitable future of this country – the working people. The women, men, trans-people, adivasis, dalits and religious minorities in the WPC resolve in unison, to build a united collective based on the principles of equity and non-discrimination, and committed to our goals stated in our passed resolution”, said Mr Chandan Kumar, national coordinator, WPC.

“This is an extremely important gathering. Working Peoples’ Charter is a very important socio-economic imitative. Working People refers to workforce in India and we are 500 million in India. It includes the working class but is not confined to it. In India capitalism is superimposed over a vast feudal base. Hence, because of this multi structural society with probing questions of caste and (tribals), we need a broader alliance”, said Professor and labour laws expert Babu Mathew.

“This is a historic conference. After COVID-19 hit, this is perhaps the largest congregation of informal workers’ organizations in India. Today we have received solidarity from Kashmir to Assam, from Gujarat to Tamil Nadu. WPC will soon take flight towards becoming a national platform to strengthen the interests” said Shri Varghese Thecknath, Director, MSI, Hyderabad.

Shri Rajiv Khandelwal, Founder and Executive Director, Aajeevika Bureau, Udaipur, commented that “despite covid, what remains unaddressed is the migrants’ relationship to the city. State is not the only policy audience, and we must have research-based dialogue with the industry and there is a strong business case for it. We need more people and resources to extend support to struggling migrant workers on the ground.”

The Government of India legislated the Code on Social Security 2020 “with the goal to extend social security to all employees and workers either in the organised or unorganised or any other sectors”. As the rules under this law are being drafted, the delegates resolved that this exercise must also guarantee universality and equity of social protection to all workers. Such a guarantee can be effectively realised through a National Social Protection Floor constituted in line with the ILO’s Recommendation 202 (2012) as ‘nationally defined sets of basic social security guarantees which secure protection aimed at preventing or alleviating poverty, vulnerability and social exclusion’.

The country had witnessed the mass exodus of lakhs of migrant workers immediately after the national lockdown imposed due to COVID-19. It brought to light the stark reality of the ‘invisible workers’ and the importance of having their database to reach out to them effectively in times of crisis. With the pressure exerted by civil society and non-government organisations (NGOs), the Government of India launched the e-Shram Portal for the registration of all unorganised sector workers in the country.