US Lawmakers’ Criticism Over Human Rights Violations in Kashmir

US Congress Committee on Foreign Affairs’ hearing on Human Rights in South Asia is considered to be a biased exercise, in which Kashmir was the most discussed issue; the others being the National Register of Citizens (NRC) and Citizenship Amendment Bill 2016.

On 5th August, the GOI revoked Article 370 of the Indian constitution that conferred special status to 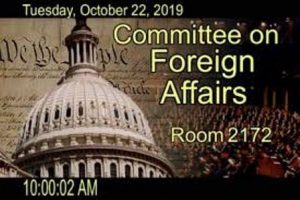 J&K. Though Maharaja Hari Singh, ruler of the erstwhile princely state of J&K signed the ‘Instrument of Accession’ with India, the territory is disputed between India, Pakistan and China. While Pakistan claims the entire state as its own, China has claims over the Ladakh region of the state.

After the issue being spoken about at length in the United Nations General Assembly last month, not just by the head of the state of Pakistan, but by the heads of Malaysia, Turkey and the Foreign Minister of the Communist Republic of China, the issue has been discussed for5 long hours by the US Congress at the hearing on ‘Human Rights in South Asia: Views from the State Department and the Region’, chaired by Democrat Congressman Brad Sherman, the chairman of the House Subcommittee on Asia and the co-chair of India caucus.

The meeting held on 22nd October involved two sessions of two and a half hours each. In the first session, the US Assistant Secretary of State for South and Central Asian Affairs Alice Wells and the Assistant Secretary of Human Rights Robert Destro testified before the members of the US Congress. In the second session, five other members concerned with the issue were called to testify before the US Congress. This has widely been considered as an American-left narrative without credible evidence in the process.

Also Read : Article 370 Has Its Pros And Cons Just Like Other Laws

Among the 14 lawmakers who were present in the meeting, 10 belonged to the Democratic Party and the remaining were from the Republican Party. With American politics becoming much polarized after the ascendency of President Donald Trump, the left-leaning Democrats have moved further left as a reaction to the right-wing politics sweeping the country. As a result, Democrats have turned increasingly critical of India’s right-wing BJP government. A presidential front-runner among the democrats, Bernie Sanders was among the first to put out a statement against India’s decision on 5th August. In a gathering, he said, ‘I am deeply concerned about the situation in Kashmir. India’s action is unacceptable’. He made reference to the UNSC resolution and called the US government to ‘speak out boldly in support of international humanitarian law and in support of the UN-backed peaceful resolution that respects the will of the Kashmiri people’. The UNSC Resolution 47 which he referred calls for a three-step resolution that first calls Pakistan to vacate the parts of Kashmir under its illegal occupation. 55% territory of the erstwhile princely state of J&K is presently controlled by Pakistan and China. What appeared to be an Indian endorsement of Donald Trump before the large Indian-American diaspora at the ‘Howdy Modi’ event by PM Modi, when he said ‘abkibaar Trump Sarkar’ and walked him around the stadium holding hands, might have antagonized the democrats as well. Indian-Americans traditionally vote for the democrats.

In the 5-hour-long session intended to discuss Human Rights situation in South Asia that consists of 7 countries, namely, India, Bangladesh, Sri Lanka, Maldives, Nepal, Bhutan and Pakistan, almost all the time was devoted to discussing India.

Issues of communication blackout, political detentions, human rights violations in Kashmir were discussed comprehensively and at length. National Register of Citizens (NRC) in Assam in which 1.9 million people have been left out, violence against Muslims and Dalits, and the rise of Hindu nationalism were the other discussed issues.

In her opening remarks, Assistant Secretary Wells iterated the success of Indian democracy in the conduction of General Election, 2019, the largest electoral exercise in the human history in which 600 million Indians participated. On the issue of Kashmir, she stated that the US is concerned about the widespread political detentions including the detention of three former chief ministers. She urged for full restoration of communication networks including internet and SMS services, though she informed the lawmakers that communication channels have been steadily restored with all landline phones and the post-paid mobile phones now fully operational. She further clarified that Washington has no objection on Article 370 but in the manner the order was executed. ‘Revocation is not what we care about, it is about how Kashmiris live their life’, she said. She called upon both India and Pakistan to engage in dialogue as per the Shimla Agreement of July, 1972. She also called upon Pakistan to do more to rein in terror groups, Jaish-e-Mohammad and Lashkar-e-Taiba, the main irritants in bilateral dialogue between the two nuclear-armed neighbours.

She acknowledged militancy and cross-border terrorism networks active in Kashmir, ‘These are very muddied waters and lots of militant and terrorist organizations seek to take advantage of the situation’. She iterated USA’s stand, ‘The United States supports the rights of Kashmiris to peacefully protest, but condemns the actions of terrorists who seek to use violence and fear to undermine dialogue’. Nevertheless, she called out the Indian government on the human rights issue in Kashmir by stating that the balance between national security and individual liberty, in this case, is wrong. When asked about the NRC in Assam and the Citizenship Amendment Bill, 2016, she at times found it hard to defend the Indian narrative and that of the US. When asked whether the bill on citizenship makes it easier for non-Muslims from neighbouring countries to get Indian citizenship, she informed that it is a serious legislation that lapsed earlier this year. She went on to say that it cannot be understood why they [India] are dividing people in this way.

Robert Destro, Assistant Secretary of Human Rights, called the situation in Kashmir a ‘humanitarian crisis’, when asked by the lawmaker from Texas, Sheila Jackson Lee. He said, ‘Yes, it is. From a 72,000-foot perspective, it’s a crisis. To the families involved, it’s a disaster’. Sheila Jackson Lee was present at the ‘Howdy Modi’ mega-event at Houston. She is the co-chair of the Pakistan caucus and at one point of the hearing, highlighted the sacrifices of the Pakistan military in ‘its fight against terrorism’. To her comment, Alice Wells acknowledged Pakistan’s efforts in its fight against terrorist organizations such as Tehreek-e-Taliban Pakistan (TTP) and Lashker-e-Jhangvi that attack the Pakistan state but called it out to do more to eradicate terrorist networks working against its neighbours, namely, India and Afghanistan.

Almost all lawmakers emphasized the difference between the accounts put out by the Indian government and those by their constituents. They also raised the issue of restriction on foreign press and American diplomats to visit Kashmir.

Denial of access to the lawmaker from Maryland, Chris Van Hollen, was the most cited example. Issue of religious freedom was another widely discussed issue. Chennai-born American lawmaker Pramila Jaypal cited the Piu Research Centre report on religious freedom. The study carried out in 198 countries placed India as the fourth worst country in terms of religious freedom. ‘I don’t say that with pleasure, I have to tell you religious tolerance in India has been a point of pride for me, as somebody who was born there and was a citizen for 35 years’, said Ms Jaypal. In her opening remarks, Assistant Secretary Wells highlighted the growing violence against Muslims and Dalits.

Ilhan Omar, democrat Congresswoman from Minnesota,who is often accused of being a terror apologist and anti-Semitic, whoon one occasion described 9/11 as ‘some people did something’, went on length criticizing the BJP and its ideologue, RSS and called India’s action on Kashmir as a part of ‘BJP’s Hindu nationalism project’. She also stressed upon Kashmiris’ right of self-determination. She described situation regarding NRC in Assam ‘as bad as Kashmir if not worst’ and compared it to the genesis of the Rohingya genocide. At this point, she had to be corrected by Assistant Secretary Wells who clarified that NRC exercise is an SC monitored exercise and was ordered by the Supreme Court in its 2013 judgement.She further clarified that the 1.9 million people who couldn’t find their place in the list, consists of both Muslims as well as Hindus. Those left out can appeal in tribunals established for the process, she further informed.

The other issues that were touched upon were the Rohingya issue in Bangladesh and certain issues in Sri Lanka. Surprisingly, Pakistan was almost given a free pass, though the draconian blasphemy laws in the country were slightly touched upon.Contracting space for civil society in India, Bangladesh, Sri Lanka and Nepal were also discussed.

Kolkata’s Aim for a Greener Diwali